As the architect of two of the most acclaimed Batman miniseries in recent memory, writer/artist Sean Murphy (The Wake, Chrononauts, Tokyo Ghost) has injected new life into the Dark Knight for a new generation. Now, he's headed back to that world — and taking it to the far-flung future of the DC Comics universe.

Next year, Murphy will deliver Batman: Beyond the White Knight, the third chapter in his riveting Black Label Batman saga that erupted in 2018 with DC Comics' Eisner Award-nominated Batman: White Knight and continued with this year's sequel, Batman: Curse of the White Knight. Both of these sophisticated, psychological tales explored hidden historical facets of Bruce Wayne's tortured psyche as he confronts old foes like the Joker and Azrael.

SYFY WIRE recently spoke with Murphy, who is currently engaged in an Indiegogo campaign for his new sci-fi/fantasy graphic novel The Plot Holes, on this fresh, forward-thinking Batman miniseries for DC Black Label. He opened up about taking the story to the future of Batman Beyond, potential Bat-tastic spinoff projects, and why Batman brings out the very best in his artistic sensibilities. 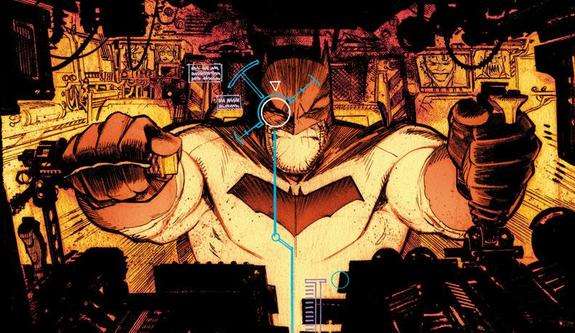 What Dark Knight-centric projects can you tease in the aftermath of Curse of the White Knight?

Well, DC came to me and asked if I wanted to do spinoffs, that I would manage, or write, get an artist for, or I would just come up with the plot and then they could hire a writer and an artist to do that.

We have a big announcement for that coming up in the next month, which I can't talk about now. They definitely want to expand the "Murphyverse" as they call it. [laughs] After The Plot Holes is done I plan on doing Volume Three of Batman, which is called Batman: Beyond the White Knight.

How will the plotline play out in your upcoming Batman saga and what are you most excited about?

This will take place with Terry McGinnis in the future as years have passed since Curse is over and this will be more of a Blade Runner Batman type of thing. Matt Hollingsworth is on it as well, he's with me on everything. It won't be until 2021, probably summer, maybe a year from now you might see issue one. I'm not sure. Volume One, The White Knight, was a political thriller. Volume Two was a historical thriller. And Volume Three will be a sci-fi thriller.

So I'm looking forward to drawing flying cars and all that kind of stuff again. The last time I got to do sci-fi was Tokyo Ghost, and I really enjoyed it. So it will be interesting to take that and interpret it through Gotham, of what Gotham will look like in the future, now that Bruce Wayne has been exposed, and all his money has been donated to the city.

What happens to a city that's been infused with that kind of funding? So he's basically going to be getting out of jail and seeing a brand new city. He's going to realize that before, Batman was the most technically advanced person out there. Now every cop is twice as advanced as Batman ever was. How is he going to be Batman now that he's low tech? And he has to track down this "guy" named Terry who stole a Batsuit. [laughs]

Can you hint at any of the villains that might make an appearance?

I haven't actually thought about it. I need to go back and watch the [Batman Beyond] cartoon. I know that the villains in that are heavily based on Spider-Man villains. I'll probably use Derek Powers, the CEO of Wayne Tech who took over Bruce's Company. But I really don't know yet. I tend to stick with villains that are a bit more grounded. The Joker gang is cool. There's a gang of playing card thieves too, the Royal Flush Gang.

Why does Batman bring out the absolute best in your creative work?

I have a childhood connection to all the cartoons, watching them as a kid. I'd seen He-Man and Thundercats and all that stuff, but nothing really reached me like Batman did. Even years later looking back, the plot, the writing, still holds up. I think a lot of it is just Storytelling 101. It's just so good. I have a hard time imagining myself writing X-Men or tackling any of these other colorful characters.

For me, Batman is a pulp character. I've always been attracted to people like Zorro and The Rocketeer. I love classic pulp-type characters. And the hypocrisy of Bruce Wayne I think is really interesting. The deep dive into the mental problems of the villains is fascinating. There's so much to be done. My whole original approach was, why doesn't Joker just go after Batman legally? It seems like there's plenty of victims out there and collateral damage. You could easily social media your way against Batman, destroy him without having to break the law if you really focused on it. And that's basically what he did.

What's Batman going to do to an online attack? Tweet back? He just doesn't work that way. I feel like Batman's really leaving himself open to that. It's kind of a book that points out the flaws about Batman that we all know, but don't want to think about because it kind of destroys the illusion. My goal was to celebrate those things and point to them but not throw in the character completely. Like, "Hey, you ever notice this about Batman?" Well, so did the Joker. And here's why he did this and here's what Batman does to fight back.

Watch for DC Black Label's Batman: Beyond the White Knight sometime in the summer of 2021.