We've got your genre development roundup right here. Today, you'll learn about a Sesame Street movie with Anne Hathaway, a modern take on an ancient Greek myth at Legendary, and a number of new shows and movies coming to Netflix.

Per The Hollywood Reporter, the plot of the upcoming Sesame Street movie from Warner Bros. will be inspired by the show's iconic theme song, which asks "Can you tell me how to get to Sesame Street?" It will also be a musical.

"It's going to be big," the movie's writer/director, Jonathan Krisel, told THR. He confirmed that Anne Hathaway (who has appeared on the show as well) is attached to star and that production could begin in late summer.

"Sesame Street never sold out," he added. "Yes, it's on diapers and it's a brand, but it never got cheesy. For 50 years, it has never lost its sheen. That's why it's daunting. You don't want to be the guy who does that to Sesame Street."

Deadline reports that Saving Mr. Banks and Venom screenwriter Kelly Marcel has been tapped to write and direct the film, which updates the myth of Charon, the skeletal boatman who took newly perished souls to the Underworld (aka Hades). 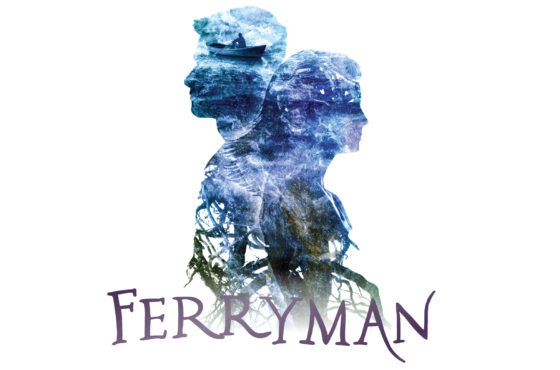 The book's plot centers on Dylan, a young woman who becomes the only victim of a train crash. Finding herself in a limbo-like plane of existence, she meets her Ferryman, Tristan. While he's only meant to guide her through to the Afterlife, the two end up falling in love.

Ferryman is part of a trilogy. The second installment, Trespassers, was published in 2017. The third book, currently untitled, will be released in the spring.

Lastly, Netflix has placed an order for several new genre offerings, the first of which is the sci-fi thriller I Am Mother, SYFY WIRE confirms.

The movie takes place in a post-apocalyptic world where a robot named "Mother" (created by WETA Workshop and voiced by Rose Byrne) has raised a generation of children meant to repopulate the Earth after the extinction of humankind. A member of this generation (played by Clara Rugaard) begins to question what Mother has told her about the outside world when a stranger (played by Hilary Swank) shows up.

Netflix scooped up the North American rights to the film at Sundance. It marks the directorial debut of Grant Sputore, who conceived the story with the project's screenwriter, Michael Lloyd Green.

Other genre projects coming to Netflix will be Spanish-language originals like the superhero comedy El Vecino and an anime adaptation of Laura Gallego Garcia's sci-fi/fantasy novel Memorias De Idhún, according to Deadline.

Based on the graphic novels by Santiago Garcia and Pepo Perez, El Vecino is about Javier, a man gifted with superpowers by a dying alien. Even so, his life begins to fall apart after he's fired from his job and his girlfriend decides to leave him. Taking on the superhero name of "Titan," Javier turns to his best friend, who helps him hone his abilities and maintain a secret identity just as Javier's ex begins investigating Titan.

Memorias De Idhún, on the other hand, is about Jack and Victoria, two humans, who become part of a war on the planet known as IdhGun, helping its people fight against a despotic Necromancer named Ashran.