Those secret Shazam! cast members didn't know what they were auditioning for

One of the most mind-blowing moments in Shazam!, hands down, is the scene where Billy Batson (Asher Angel in his Zachary Levi form) shares the wizard's magical powers with his fellow foster kids: Mary (Grace Fulton), Pedro (Jovan Armand), Freddie (Jack Dylan Grazer), and Darla (Faithe Herman).

As each kid places their hands on the staff and speaks Shazam's name, they also turn into adult superheroes, the Marvel or Shazam Family, to be exact. More surprising is that they're all played by some big-name actors: Adam Brody (Freddie), Megan Good (Darla), D.J. Cotrona (Pedro), and Michelle Borth (Mary). All of them go on to fight Dr. Sivana (Mark Strong) and the Seven Deadly Sins.

According to director David F. Sandberg, however, those actors apparently knew nothing about the roles for which they were auditioning before they were cast.

"It was interesting because when we did the casting of those characters, we wanted to keep it a secret. So, they didn’t even know they were auditioning for superheroes," Sandberg told The Hollywood Reporter. "[Screenwriter] Henry Gayden wrote everyday scenes that had characters with the traits we were after, but the actors didn’t even know what they were auditioning for." 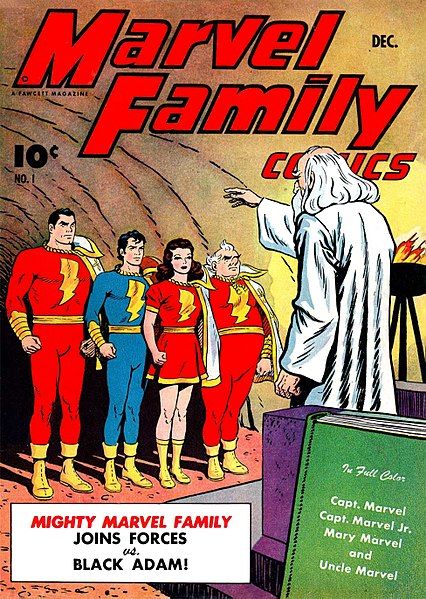 In a weird twist of fate, both Brody and Catrona had both been slated to appear as The Flash and Superman, respectively, in George Miller's ill-fated Justice League project from over a decade ago. This didn't really hit Sandberg until after filming on Shazam! had wrapped.

"Afterwards, we said, ‘Oh, sh--! They finally get to be superheroes in a DC movie.’ They didn’t even know they were auditioning for superheroes," he continued.

One of the reasons that the Marvel Family sequence works so well is because fans didn't really see it coming. Luckily, the trailers for the movie gave nothing away about that big reveal, and Sandberg feels that withholding that intel helped in the overwhelming positive reaction from both fans and critics.

"I don’t run marketing, but I am glad how they’ve dealt with trailers because they haven’t spoiled things. It hasn’t been the typical 'here’s the whole movie' in miniature format. We’ve actually held off on the big surprises, which I think makes the movie really effective. That’s partly why it’s been so well-received, because people go in and they don’t expect as much. When they see all these twists and turns, they’re really satisfied," he added.

As many have pointed out, Shazam! — much like the Wonder Woman and Aquaman movies — is a clear sign that the DC Extended Universe is back on the right track. Even so, that doesn't mean that the filmmakers who work on comic book adaptations have to pick sides.

"To me, I’m just as big of a fan of Marvel as I am of DC; I go and see all of these movies. I’m rooting for all superhero movies to be good. So, it was a bit of a shock to realize how sensitive some people can be about this, but overall, most people are quite sane about it," said Sandberg, about the fervent fandom surrounding superheroes. "You just realize that maybe you shouldn’t crack too many jokes, especially not about sensitive subjects. I just didn’t realize before taking on the job that that was as much of a thing."

Oh, and if you were wondering if Shazam could ever be naked as Shazam, well, click here.

'Shazam: Fury of the Gods' reunites the Marvel Family as DC FanDome goes behind the scenes for sequel

Zachary Levi is not actually Shazam!, politely asks fans not to drop by his house