The expanding comics universe that puts Hawkins at its paranormal epicenter is getting a hot new storyline at Dark Horse Comics. The comics publisher and Netflix are teaming up on the next line of Stranger Things comics, revealing Stranger Things: Into the Fire as a new miniseries slated to turn comics shops upside down early next year.

Into the Fire takes place after the events of the TV series’ second season, according to Dark Horse, and it’ll follow a couple of Hawkins National Laboratory escapees as they try to track down Nine, whose special telepathic ability sounds more than a little like that of a certain pyrokinetic Stephen King character. 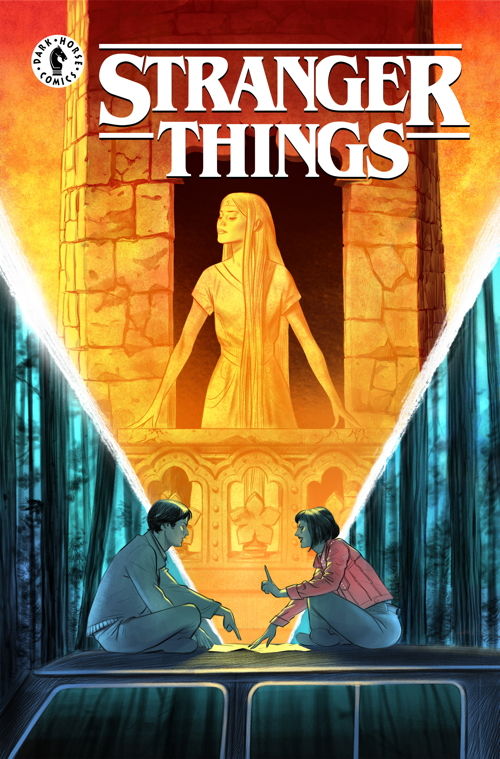 “In 1984, several years after escaping Hawkins, two survivors of Dr. Brenner’s experiments seek out number nine because she needs their help now more than ever,” Dark Horse teases. “When news reaches them that the lab was shut down they go on a harrowing search for Nine, a powerful pyrokinetic, whose shattered psyche threatens to burn them all to ashes if they can’t find her and free her from her own malevolent imagination.”

Did we mention Stephen King already? The prolific master of terror and chills is set to release If It Bleeds, a new four-novella compilation next spring that, according to the description, promises a collection of creepy tales that’ll take readers “into intriguing and frightening places.”

The cryptic titles for each story don’t reveal too much (there’s Mr. Harrigan’s Phone, The Life of Chuck, Rat, and title story If It Bleeds), but King recently shared an early excerpt with Entertainment Weekly — and the short snippet appears to have a definite aura of X-Files-style, unsolved-mystery creepiness.

According to the EW fragment, there’s the mailbox arrival of a padded envelope, a USB drive inside labeled “If it Bleeds,” and the drive’s contents: a folder with photos and "audio spectrograms," and a "kind of report, or spoken-word diary" whose final entry poses more questions than answers.

That’s more than enough to whet our appetites, and with King’s venerable track record with the novella format (both Stand By Me and The Shawshank Redemption were adapted for the big screen from King’s shorts), we’re hoping the months between now and If It Bleeds’ May 5, 2020 release just fly by. In the meantime, we’ll treat ourselves to Doctor Sleep, King’s adapted movie sequel to Stanley Kubrick’s The Shining. Starring Ewan McGregor as Danny Torrance all grown up, Doctor Sleep arrives in U.S. theaters on Nov. 8.

While we’re treading uncanny paranormal waters, Hideo Kojima’s Death Stranding has just released a new cinematic trailer. Focused squarely on Norman Reedus’ character Sam Bridges, the clip admirably follows Kojima’s penchant for not giving us an easy-to-digest explanation of just what the heck is going on — but it does show off the game’s epic scale, as well as graphics that almost look ready for the next console generation.

The trailer also gives us perhaps the most succinct introduction yet to Sam — especially the isolated feeling that, once he steps outside the safe zone, he’s pretty much swept into a one-man-against-the-world struggle to schlep the game’s MacGuffin (in this case, a high-tech metal briefcase) across obstacles both natural and otherwise. There’re meteor-sized impact craters, rolling rivers, the fire line of enemy factions (like the harpoon-wielding baddies in the clip), and whatever the heck that shadowy colossus-looking thing is in the distance, right as the action fades.

With recent news that the game’s jar-babies will actually talk to you through the speaker embedded in your PlayStation 4’s DualShock controller, this game just keeps getting creepier and creepier — but in the best of ways. We finally get to take the wraps off Kojima’s weird, wild mystery when Death Stranding lands on the PS4 on Nov. 8 (that’s the same day that Doctor Sleep awakens in theaters — so start picking your poison now.)