I'm a sucker for a good soap opera.

I watched General Hospital for decades, a ritual that began in elementary school thanks to my mom (before she had to re-enter the workforce). Back then, CBS Friday nights were packed with The Dukes of Hazzard, The Incredible Hulk, and Dallas. When you're too young to go anywhere without a chaperone, that was three hours of fiction heaven!

It's no coincidence, then, that two of the first comics I got hooked on, Amazing Spider-Man and The Avengers, had no shortage of interpersonal conflict and, in the case of ASM, plenty of romantic melodrama.

It got me to thinking how, during this Golden Age of Comic Book TV and its varying types of series, the one genre that hasn't been jumped on by the networks and streaming services is the soap opera. Sure, The CW's Arrow had the Olicity ship powering the series for eight seasons. And I know Riverdale has all kinds of drama happening each week. But for the sake of this column, let's focus on superhero comic adaptations. Because, as I noted above, comics have leaned on soaps for storytelling inspiration for years. Comics and soap operas share many traits, like long-running narratives, familiar settings (hospitals, newsrooms, secret lairs), romance, and often nonsensical twists and turns.

Where's our superhero soap opera? Where is a show that goes all-in on all the standard soap tropes, like betrayal, illicit affairs, and madmen with machines that can freeze the world? Where is a show that embraces all the wonderfully wacky narrative tricks that daytime and prime-time soaps have used to hook viewers? I bring this up because there's a comic book just sitting there waiting for a studio to find it and say, "Go make this!" I'm talking about the Image Comics series Noble Causes.

If you're not familiar with the comic, it debuted in 2002. Created by Jay Faerber, it centered on the Nobles, a family of super-powered beings... but they were more like the Kardashians than the Fantastic Four. The Nobles were rich, impossibly famous, and wildly messed up. Based in the Image universe, they crossed paths with heroes such as the Savage Dragon and Invincible. But Faerber's series — which at first was broken up into mini-series and one-off issues before becoming an ongoing — focused on the nutty personal lives of the family.

At first, the story was told through the eyes of Liz Donnelly, the non-superpowered wife of Race Noble, a speedster and the media darling of the Nobles. In many ways, Liz was the series' Pamela Barnes. During the early years of the TV series Dallas, Pam (Bobby Ewing's wife) was the prism through which the audience saw just how messed up the Ewing family was.

The other key figures included:

Doc Noble, the patriarch and scientist who liked machines more than people.

Gaia Noble, the real head of the family who seemed to care more about the family's public image than about, well... the family. She's like the family momager, only with the powers of a multi-dimensional sorceress. You messed with Gaia at your own peril.

Rusty Noble, the tragic oldest son whose brain was transferred to a robotic body after a deadly battle.

Celeste Noble, Rusty's ex-wife and a real piece of work. She married her way into the Noble family for the prestige. She wasn't shy about the occasional nip/tuck, either.Then there are my two personal favorites, Frost and Zephyr. Frost is Gaia's son from an extra-marital affair, and in the world of the Nobles, he's somewhat of a myth. Gifted with the power to control the cold, he takes "black sheep" to a whole other level.

As for Zephyr, she's the youngest member who's embarrassed the family a number of ways, including affairs with supervillains and a sex tape! Perhaps the most troubled Noble, Zephyr is a fascinating character and my personal favorite of the series.

During the book's six-year, 40-issue run, Faerber, an admitted soaps fan, used every tool in the soap opera kit to keep the reader hooked. Shocking deaths, infidelity, alternate realities, time jumps, and even amnesia were used to tell the story of the Nobles. It also featured great interior art from Fran Bueno, Ron Riley, and Jon Bosco, as well as a slew of great variant covers from the likes of Patrick Gleason, Amanda Conner, Todd Nauck, and even Image co-founder Jim Valentino. 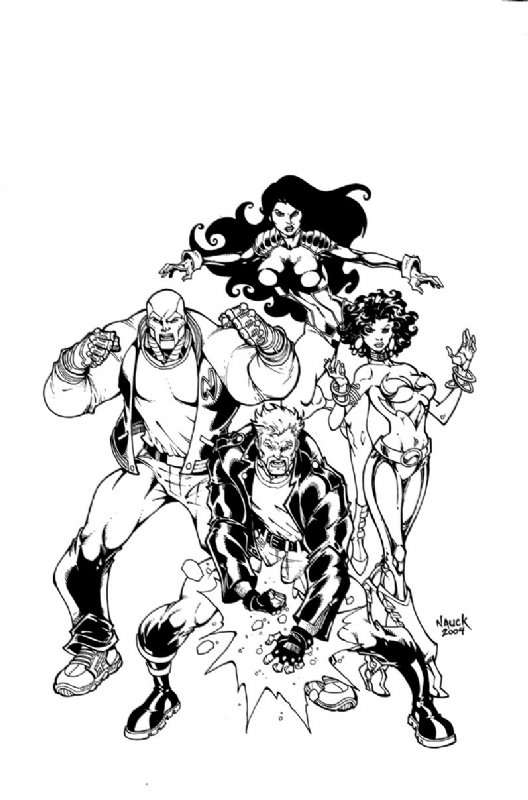 The series was allegedly optioned for TV at some point in the early '00s, but it never got past the development stage. Faerber moved on to create other comics such as Dynamo 5 and Copperhead before cracking television as a writer on shows like Ringer and, most recently, Supergirl. I have no idea if there remains a chance of getting Noble Causes back on the radar of television execs, but I certainly hope so.

I always thought the book was slightly ahead of its time, given that it debuted right as the era of social media was taking off. Its observations on the corrupting nature of fame in a world of superpowers aren't quite as extreme as what we saw in Garth Ennis and Darick Robertson's The Boys — which debuted several years later, FYI — but it was no less cynical. The Amazon Studios adaptation of that comic confirms that off-kilter takes on impossibly flawed superheroes can succeed, if done right. And what's more off-kilter than a superhero soap opera? It's Dallas and Dynasty meets the Fantastic Four — the pitch basically writes itself!

We are blessed to have so many series based on the comics we love. It's not just the quantity, either, but the quality. Programs like The Umbrella Academy and Doom Patrol combine ambition and entertainment seamlessly; The CW's DC series has mastered the art of superhero adventures. Swamp Thing was a tantalizing taste of comics horror, and The Walking Dead has proven the appeal of that genre. For the good times to keep rolling, I hope the people who give the green light are digging deep through the longboxes for inspiration and variety. Because there are many comics out there that could, in the right hands, be the next big thing.

What comic book series do you think is a TV hit waiting to happen? Find me on Twitter/Facebook/Instagram and let me know!

Behind the Panel isn't just a column — it's a multi-platform series! Our video series is loaded with my in-depth interviews with amazing comic book creators. The Behind the Panel podcast is an audio documentary series that provides unique insight into your favorite creators and stories. Check 'em out, we think you'll enjoy them.

It's a fan thing
Join SYFY Insider to get access to exclusive videos and interviews, breaking news, sweepstakes, and more!
Sign Up for Free
All Posts About
Comics
Features
Behind the Panel
Image Comics
Jay Faerber
Noble Causes
Related Stories