Vampirism has a complex cinematic history, and the mythological creature has transcended the margins of the horror community. Historically, vampires have been imagined as creatures that embody the darkest of human desires. Whether it be immortality or finding a love that will last for eternity, the vampire has been altered to fit into any type of genre.

Vampires in media have often been depicted as being highly sensual or sexual beings, though chaste in most cases. They represent another spectrum of sensuality and intimacy outside of sexually physical or reproductive intercourse (neck sucking not included). However, Black women have dealt with hypersexuality without sensuality or consent in the crudest sense, as it was projected onto us as a means of dehumanizing us. Black, TERF-free feminism has taught us that owning our sexuality and bodily autonomy liberates us from the patriarchal eye. This type of reclamation empowers us to create firm boundaries in our lives and also gives us the confidence to fully embrace our entire existence.

In most cinematic cases, though, the Black female vampire has fallen victim to misogynoir and the same sociological standards as Black women in reality. Whether it has been as the sassy sidekick who falls into the wrong crew or a ferocious, precocious vixen who owns her power but falls tragically for her confidence, the Black female vampire beckons to be liberated from the cisgendered, male gaze. Regardless, these are some of our favorite vamps who have embodied the dark side of the feminine spectrum.

Aaliyah was at the peak of her career when she was tragically killed in a plane crash in 2001. Despite this, her performance as Akasha in Queen of the Damned has been revered in both mainstream and underground communities. We are introduced to the vampire queen after Lestat (Stuart Townsend) awakens her from her slumber. Akasha is then revealed to be the titular Queen of the Damned, the Mother of all Vampires. Along with her King, the pair had fallen asleep when they ran out of human lollipops to devour and had conquered every country of the world. This bloodlust made her unstoppable and she harbored no empathy for anyone who crossed her path or stood in her way. When she first entered The Admiral’s Arms (a perfectly Euro-Trash, goth vampire club), she asserted her dominance by seducing us with a hypnotic dance and setting all of the vampires who diss her future lover Lestat on fire.

This depiction of a Black woman asserting herself in a primarily white, subcultural space was genre-defining. Around this time it was still taboo to be a Black person navigating alternative lifestyles, music, etc. without it being seen as a "white thing." Her representation inspired numerous Black people to embrace their alt styles without having to resign their Blackness. Although many of Aaliyah's scenes did not make the final cut, her performance is still iconic, and she's often been credited as being the Scream Queen, which could have been due to her love for horror and fantasy.

Tara Thornton (Rutina Wesley) of True Blood is a queer vampire to love, but one full of missed potential. Always reduced to be the sassy Black chick in a town full of genteel, Confederate white folks and shamed by her mother, her long-time desire to escape the small town of Bon Temps was understandable. She was consistently bombarded with emotional crises, despite going through her own; she espoused saint-like levels of support for her best friend Sookie Stackhouse, while her own needs were left invalidated.

However, Tara also possessed an inherent ability to remain true to herself in the face of misogynoir and pertinent anti-Blackness. Her only desire was to be loved by those around her (including her mother), only to be expendable to the community she inhabited. In essence, she became a vampire after she attempted to save Sookie's life and had no choice but to turn. Tara was no stranger in her hatred for vampires and it was quite ironic that her sacrifice turned into a situation of personal regret. If Tara had truly lived for herself and realized her worth, would she have lived happily ever after in another town? The archetype of the selfless Black woman has been utilized so many times that it becomes masochistic in some approaches, and Tara clearly deserved the chance to heal from her traumatic childhood instead of being forced to become something she loathed. In this particular case, the tragic case of the Black sidekick works against the idealistic autonomy of embracing the sensual enigmas of vampirism. 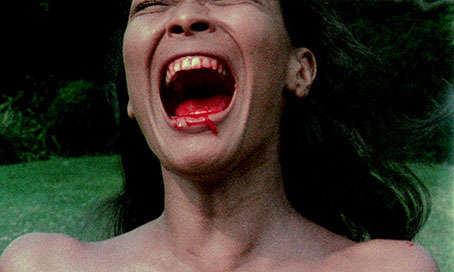 Marlene Clark was a true scream queen in her own right. In the 1973 cult Blaxploitation film, she graced us as the fierce Ganja, the widow of Dr. Hess' (Night of the Living Dead's Duane Jones) colleague. Clueless as to what happened to her husband, she fell in love with Hess and eventually discovered his dark secret. At first, she is seduced with the idea of living a luxurious life with Hess for eternity, moving into his giant estate. Then came the realization that she is doomed to a life of murder and deceit. Feeling as if she had been manipulated, she decided to return to a Christian lifestyle and ultimately redeem her soul for her selfish decision. In the end, she took a new lover and they created a new life with each other after Hess killed himself.

The film received mixed reviews because it was not filmed in the same vein as most Blaxploitation horror films of the time. The characters were not racist archetypes and in essence, the movie vibed to an experimental eye that was not easily consumable to the average filmgoer. Ganja is direct, assertive, and extremely self-aware of her worth. While the archetype of the Sapphire within the Blaxploitation film movement could have applied, the film embraces Ganja's autonomy and non caricatured presence throughout the film. Despite its obscurity, the film lives on as a staple for the Black horror genre and has enjoyed its cult status amongst many. Clark continued on as a Scream Queen for a time and even flirted with grind house cinema and other low-budget horror films.

Vanessa Brooks (Sanaa Lathan) and Dr. Karen Jensen (N'Bushe Wright) are two Black women who navigate the world of vampires versus humans in this early Marvel cinematic adaptation. Vanessa is the mother of Blade, the half-human half-vampire daywalker who presumably dies at the beginning of the film. As it turns out, Vanessa had survived childbirth and had become a vampire. Meanwhile, Karen watches her jerky ex-boyfriend become vampire fodder after Blade raided the infamous "blood rave." Narrowly becoming a vampire, she discovers a "cure" for vampirism and is promptly interjected into the war between vampires, cops, and humans.

These two women are placed at odds with each other in a classic Madonna and the Mistress spiel that honestly, still centers Blade as The Chosen One. The fact that Vanessa chose her life as a vampire gives her some agency, and although we are not given much backstory in regards to how Blade came to be biologically, clearly, motherhood was not her number one agenda. Vanessa, unfortunately, doesn't have a lot of screen time and is killed off, preventing her from having an arc in future movies. Meanwhile, Karen created a cure for herself and a stronger serum for Blade before disappearing from the story altogether. Consider this a call-out to possibly do an origin film for these two ladies?

Grace Jones is a legend in her own right and set the precedent for Black artists in the 1970s, '80s, and today. While the film is lukewarm at best, the scenes where Katrina has a chance to entrance the audience do not disappoint. The story follows two college bros Keith (Chris Makepeace) and AJ (Robert Rusler) on their excursion to the "bad parts" of town. They end up in a strip joint where Katrina (Jones) steps out onto the stage and performs a type of surrealist stripper dance set in full body paint. She succeeds in turning AJ into a vampire, though she doesn't have a strong presence or role in the film (unfortunately).

The stage performance is the lasting impression of the film and is often the most remembered scene. Ironically, Katrina wears white face paint and blue contact lenses as a form of pantomiming Eurocentric beauty ideals. Comparatively, Jones has faced scrutiny because of her unabashed acceptance of her Black features and has inspired many dark-skinned women to embrace their own beauty. Though Katrina is considered to be a leader of monsters, she inhibits goddess-like immortality in her dance, exacting revenge on the white male gaze while asserting her autonomy, beauty, and grace. Perhaps one day, Jones will play the vampire role she was truly meant for.

It's a fan thing
Join SYFY Insider to get access to exclusive videos and interviews, breaking news, sweepstakes, and more!
Sign Up for Free
All Posts About
Fangrrls
Movies
ScreamGRRLS
lists
Related Stories