The importance of Silhouette Chord

The number of well-known Black superheroines and comic characters in the current cultural conversation has been trending in a positive direction over the past couple of decades, with more characters outside of the X-Men’s Storm getting screen time and solo comics. On the film and series side, the likes of Amanda Waller, the Dora Milaje, Shuri, Misty Knight, Nightshade, Black Mariah and the recent racebent Domino have all been in a part of highly successful films and shows.

Out of this bunch, however, there is only one character who is disabled. While Misty Knight provides some level of representation for disabled Black women, she by no means should be the only one, the more the better. Keeping with the Marvel connection, Silhouette of the classic New Warriors is another Black disabled woman who just so happens to be a superheroine in her own right. It’s imperative that fans are able to see themselves in the fandoms they love and support, and it’s past time audiences get to know Silhouette. 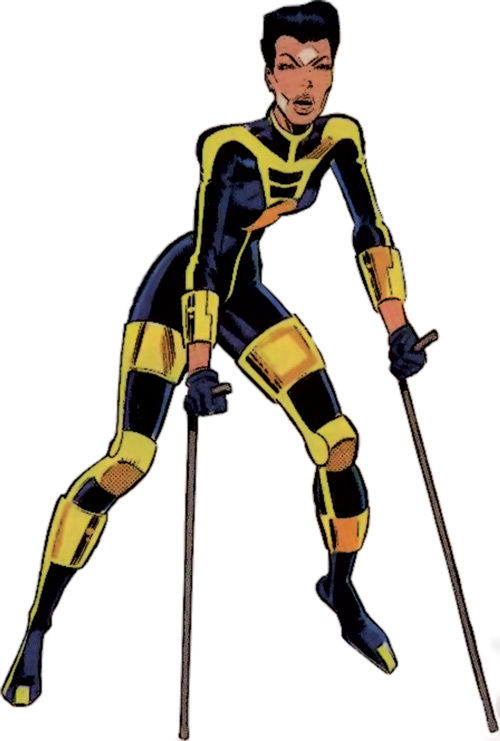 Silhouette is a mutant who has the ability to teleport over short distances on Earth by traveling through the Darkforce Dimension, powerful and extra-dimensional energy that can be manipulated by a handful of beings that are attuned to it. Silhouette melts into any shadow, thus allowing her to enter the Darkforce Dimension, and then reemerge on Earth through another shadow. Created by writer Fabian Nicieza and artist Mark Bagley, Silhouette was first introduced back in 1990 in New Warriors #2. Before joining the New Warriors, she and her brother, Midnight’s Fire, were independent vigilantes in New York. Both Silhouette and her brother have a very interesting background.

Their mother, a woman named Miyami, was a descendant of a cult called the Dragon's Breadth who built their temple atop a powerful energy source called the Well of All Things, located in Cambodia. The cult used this as a source for a specific breeding process. They hoped that their new race of superior humans would harness the power from the well to unify with the culture of the West. When a recon team in Cambodia stumbles upon their secret temple they are chosen to father the children that would be those harnessing the power. Andrew Chord, a member of said team, becomes the father of both Silhouette and Midnight Fire; however, he is unaware of their existence. Out of a desire to free her twins from the cult, Miyami had faked her and their deaths, placing them in an orphanage to protect their identities.

Silhouette and her brother end up abandoned in Chinatown, resulting in them having to grow up quicker than most children their age. They learned how to survive on their own in a dangerous city, where they discovered their mutant abilities. They both joined a gang called the Concrete Dragons. With them, Silhouette learned how to defend herself and use her shadow teleportation power. She and her brother left their gang and became vigilantes after Silhouette witnessed the members of their gang killed by a rival gang.

Silhouette and Midnight's ended up partnering with a man named Dwayne Taylor, known as Night Thrasher, and the three of them organized an effort to take down a slew of street gangs in New York City. Dwayne also just so happened to be under the guardianship of their estranged father, Andrew Chord. Messy, to say the least. Their partnership quickly dissolved, however, when Silhouette became paralyzed from the legs down after being struck by police gunfire due to a sting gone bad.

Midnight's Fire blamed Dwayne for what happened to his sister, later becoming a drug lord, which caused Silhouette to distance herself from her twin. Meanwhile, Silhouette continued her crime-fighting career after her incident, later seeking the aid of the New Warriors after a run in with a villain named the Bengal. In New Warriors #7, Silhouette encountered Bengal who had stalked her all the way to a church, fighting him off using her crutches and escaping him by using her mutant powers to teleport herself to Dwayne's home. He agreed to help her and defeated Bengal on her behalf. She soon joined the New Warriors and with them battled the likes of Emma Frost, Terrax, and the Sphinx. 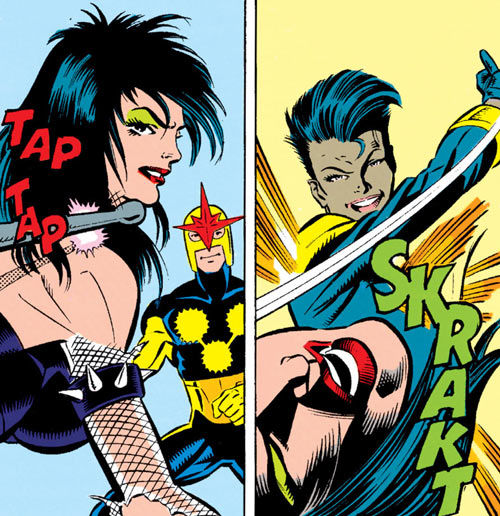 One of the great aspects of Silhouette is how her disability aids are very much a part of who she is as a superheroine. Silhouette’s disability isn’t masked or hidden away by her mutant powers. Instead, she uses combat-capable crutches and leg braces while fighting alongside her teammates. There are plenty of comic panels that show her in action, using a combination of her crutches and mutant abilities to take down bad guys left and right.

Aside from Misty Knight, who appeared in the now-canceled Luke Cage and Iron Fist, there aren’t any Black and disabled characters in genre, especially those whose disability aids are used in the same manner as Silhouette. Her character provides representation for individuals who use mobility aids in their day to day lives, so all the more reason to bring this amazing character to the big or small screen. Hopefully, we get to see her and the other members of the New Warriors brought to life one day soon.