Last year may well have been the best in Marvel’s illustrious history. From game-changing (Black Panther, Into the Spider-Verse), to culminating (Infinity War), to hilarious (Deadpool 2, Ant-Man and the Wasp), Marvel covered all the bases in 2018.

Yes, Black Panther was the blockbuster movie hero, his success unimpeachable. But when all the platforms are taken into consideration, another stood out as the MVP. He conquered the big screen and the small screen, he has a huge position of power in the comic books, and he helped kick off one of the best video games of the year. We are, of course, referring to the Kingpin of Crime himself, Wilson Fisk. Let’s look at how he subtly took over all angles of Marvel Entertainment over the past year.

Daredevil's third season was perhaps the best of the series, and one of the best seasons of Marvel television overall. A lot of the credit for that excellence must go to Vincent D’Onofrio and his portrayal of Wilson Fisk. After making a deal with the FBI, Fisk is released from prison, and with the help of agent “Dex” Pointdexter, convinces the city that Daredevil is not the hero they think he is. This season not only showed Fisk at his “puppet strings” best, but also showed his return to classic white suits from the comics. 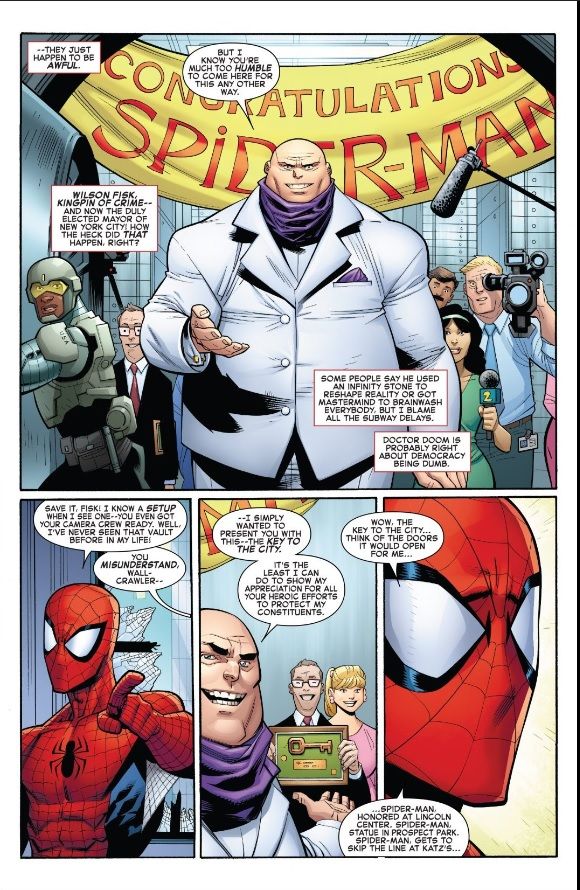 After years of taking a back seat to other villains trying to take over the mantle of “Kingpin of New York,” Wilson Fisk took matters into his own hands and is now the mayor of NYC. His first order was to outlaw all vigilantes in the city.... which didn't go so well

After a battle with Daredevil and the Hand that left him in critical condition, Fisk tried a different approach to taking down the city’s vigilantes: supporting them. He embraces the Amazing Spider-Man right out the gate, and consequently, Fisk’s support for the wall-crawler makes the other heroes less keen on partnering with Peter Parker. Only the Kingpin could figure out the best way to hate someone is to like them.

Marvel’s Spider-Man for PS4 was one of the best video games of the year. The heart-wrenching story gives fans the absolute best out of their favorite characters. The way you can swing through all of Manhattan is, for lack of a better term, amazing. Surprisingly, it’s the Kingpin that makes all this happen. He is the first boss in the game, and his level seamlessly teaches players what the controls are and how the gameplay works. You learn how to swing, fight, and dodge. Defeating the Kingpin enables you to understand how to play.

From a story standpoint, his defeat is the catalyst for the escalation of super-villains in the city. As he leaves for prison, Fisk (voiced by Critical Role’s Travis Willingham) tells Spider-Man that he was the one controlling NYC, and without him, everything will get worse. Unfortunately for Spidey, Fisk was right.

Spider-Man: Into the Spider-Verse is a phenomenon, rightfully being hailed as one of 2018's best films. While also bringing together the Spider-Heroes of multiple universes, the movie tells the story of how Miles Morales became his world’s Spider-Man after the death of Peter Parker at the hands of, yep, you guessed it, the Kingpin.

After a car accident took his family following a battle with Spider-Man, Fisk (Liev Schreiber) enlists the aid of Doctor Octopus (Kathryn Hahn) to tap into the multiverse and bring his family back to him, even if it’s not the family he lost. While his motivation was born out of extreme loss and was relatable, his methods to rectify the situation are the reason the Spider-Heroes needed to stop Fisk.

Arguments are going on every day (even at this very moment) about “who’s the best (insert character type here)?” In 2018, the choice for the best villain isn’t the one that went “snap.” It was the one that went through four different mediums and made huge impacts in the lives of the heroes he fought. Yes, he was defeated, but Wilson Fisk left a mark on 2018, so even by losing, he won.