Harley Quinn has only been around since 1992, but our girl has already racked up some iconic looks in her short time as DC's resident clown-themed antihero. In anticipation of many more to come, SYFY FANGRRLS' Sara Century and Emma Fraser used their respective comics and fashion expertise to discuss the many looks of one Harleen Quinzel.

Sara: 1992 saw the debut of a lot of great things, including the Juiceman Juicer, the Super NES, and KFC's popcorn chicken. Also, Harley Quinn! Popping up for the first time in Batman: The Animated Series with the episode, "Joker's Favor," Harley was initially the Joker's girlfriend and henchman. The classic costume is designed by Bruce Timm, who created Batman: TAS alongside Paul Dini. Timm has said that he has forgotten much of the specifics around designing Harley, but that it involved flipping through books of classic Harlequins. This is the costume I most associate with her when she was with the Joker, though, so it is bittersweet because that guy is the worst.

Emma: Harley's signature comic book look would be hard to wear out in the real world without catching some stares, but in her debut appearance, a bold villainous statement is required. The red and black jumpsuit draws on jester attire, but it is also extremely form-fitting (seriously, there is nothing about this costume that looks very forgiving). The diamond print is reflective of the Harlequin element, the jester hood and mask are perfect identity concealers, and those white cuffs are going to stain easily — but they are very on-trend in this year of statement sleeves. It is playful and unique while proving that having a unitard in your closet will come in handy.

Sara: The Arkham Asylum video game was a lot of people's introduction to Harley Quinn outside of the cartoon. Style-wise, Harley's look is a bridge between her original incarnation and the new, empowered Harley we see after she leaves Joker in the comics. It definitely continues to prioritize the clown theme and introduces one whole tutu into the mix. It's a little more glamorized than her first look while still reminding me that a clown with a baseball bat is quite literally the last thing I ever want to see in life.

Emma: Switching out fancy cuffs for puffed shoulders is a choice I can get behind — again, the scaled-up sleeve is having a moment. Mixing materials combining the tulle skirt with a quilted corset is a strong sartorial statement, even if I am not wild for the overall French-maid-meets-dangerous-jester vibe. Don't get me wrong, Harley looks great, but this isn't an outfit that will have longevity outside of Halloween. 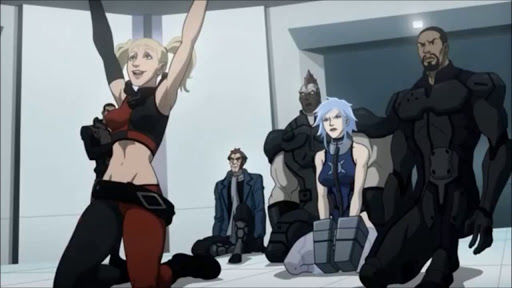 Sara: This was a cartoon based on Arkham Asylum and stars a Harley who has been forced to join the Suicide Squad by Amanda Waller. Harley's look is way more athletic than last time we saw her, but she has a lot more to do in this cartoon — for instance, breaking into Arkham. This is Harley's attempt at stealth gear, which is hilarious.

Emma: The low-rise pants make it seem like Harley is getting ready to hang with Paris, Lindsey, and Britney in 2006, even if this cartoon came out nearly 10 years after this pelvis-revealing trend. Do you want to know if Harley has had her appendix out? These pants will give you that answer and defy the laws of gravity. This particular hip-hugging trend keeps threatening to make a comeback and while some people are afraid of clowns, I am more concerned by the threat of this tricky-to-wear garment. Good news! The arm warmers and red lipstick are working like a charm. Just leave the pants style in the '00s where they belong.

Sara: The Injustice Universe is about a parallel reality in which the Joker destroys Metropolis with a nuclear bomb. As you can imagine, this is a fairly bleak alternate universe, and everyone is truly their very worst selves — except Harley, who is actually doing pretty great. She even joins the Justice League. In the Injustice comic, she and Ivy get married in Vegas at one point, but we, unfortunately, don't know what outfits they wore to that.

Emma: Lara Croft but make it Harley Quinn is the vibe I am getting from the crop top, micro shorts and washboard abs. The harness is making a crossover into fashion in recent years, which has even included a turn on the Oscars red carpet, and pairing it with the hot pink gloves is a fun touch in upping the glam. Harley is nothing if not resourceful in her ability to blend two distinct styles while also looking tough as nails. 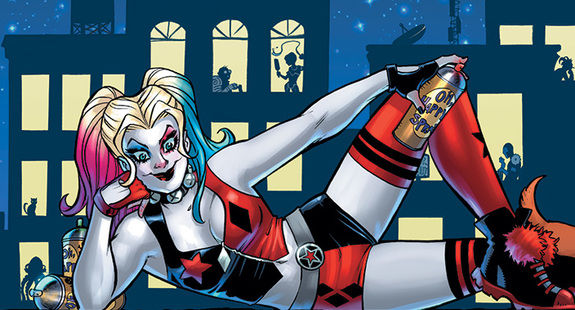 Sara: Amanda Conner and Jimmy Palmiotti were the creators behind what remains Harley Quinn's most epic comic runs, and they gave Harley a look that paid tribute to the old days but that was entirely its own vibe. Conner and Palmiotti openly admitted to regularly using cosplayers as inspiration for their many Harley redesigns, and the aesthetic of their series truly can’t be beat.

Emma: I am getting a roller derby aesthetic from this combination of garments, which lean into the original costume concept with a contemporary flourish. For recreating purposes, Conner's Harley is probably the easiest and most accessible of the comic book versions. Particularly if you want to dip your toe (literally) into Harley's closet as the thigh-high socks — knee-high will also work — and high top sneakers are every-day items that will work with a range of outfits. The red pom-pom shoe detail is also a fun (and cute) twist on the concept of her jester hood. What I really love about this look is how it's equal parts smoking hot, playful, and tough, which is exactly what this character should be. 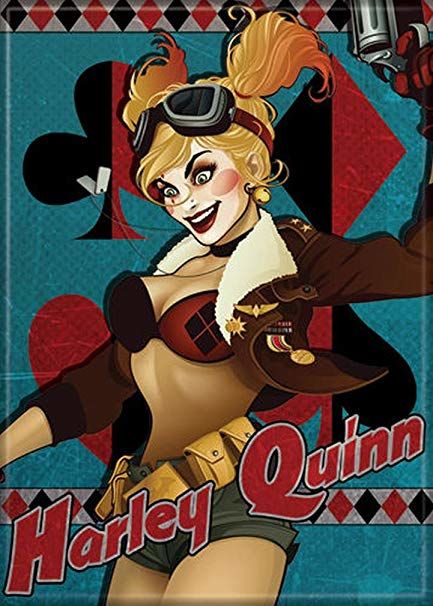 Sara: The Bombshells Universe was set in WWII with all the women of DC, but if they were queer (which some of them are canonically and some aren't). What I'm telling you is that it is one of the greatest comics ever. Harley of this universe is in love with Poison Ivy, killing Nazis, and living her best life, and boy, does her costume reflect it. This look is classic and perfect.

Emma: Just because Harley has only been around since the '90s doesn’t mean she can't get in on the vintage action. The '40s look good on her, as does the traditional shearling flight jacket and goggles. She manages to be period-accurate with a very Harley pin-up twist. The black and red bra could fit right into any underwear campaign, and the khaki hotpants are not an army-issue pair, but Harley would never fall in line wearing regulation attire. The jacket is as close as you're going to get to that.

Sara: I think this look is pretty good and it definitely appealed to a lot of people, but it's definitely full of cliches. The best part of the outfit for me is the hair and makeup combo, which pulls off this great red and blue color scheme that catches the eye. On the other hand, there's way too much Jared Leto Joker in this outfit, so I'm glad it's not the end of her evolution.

Emma: I know this was a super popular Halloween costume in 2016, so this might be a rather unpopular opinion, but I have always found Harley's "Daddy's Lil Monster" shirt to be far too obvious. It strikes me as something someone might expect a person who is unhinged to wear rather than the kind of clothing Harley would actually pick out of her closet. The red and blue motif coupled with the baseball theme is cute and a nod to Harley's style duality (and favored weapon) and the bomber jacket is the most covetable item (if you ignore the Joker property detail on the back). However, the barely-there sequin hot pants are essentially the same size as her belt, and that is not enough. Sure, Harley is not meant to be subtle or modest in her dress, but this is more eye-roll than eyebrow-raising. It is asking for us to be shocked, and instead, I am bored.

Sara: This is the Harley we've always wanted her to be! She ditches the Joker and her wardrobe quite literally comes alive. Harley has her own very unique style outside of clown themes and Joker cosplay, and it's great to see her breaking out with it.

Emma: I am so excited to see Harley Quinn wearing a fabulous pair of golden yellow Harlequin-print overalls (rather than a few repeat diamonds) paired with a hot pink crop top. Harley's contemporary interpretation of the traditional Harlequin uniform subverts expectations while still staying true to the character. While her Suicide Squad look felt like she was dressing for someone else, this Birds of Prey aesthetic is all for her. She still has the pigtails and pretty much every piece of jewelry she could fit around her neck and on her fingers, but this look has ditched the trying-too-hard baggage. In some cases, less is more, but not for Harley when she comes out to play.

It's a fan thing
Join SYFY Insider to get access to exclusive videos and interviews, breaking news, sweepstakes, and more!
Sign Up for Free
All Posts About
Comics
Fangrrls
Movies
TV
Birds of Prey
Birds of Prey (And The Fantabulous Emancipation of One Harley Quinn)
Geekouture
Harley Quinn
lists
Related Stories

Harley Quinn's animated series jumps to comics ahead of Season 3, and she's on the run from rogue Jim Gordon

Where to stream your favorite SYFY shows, new and old

Where is the Waiting Room in new 'Quantum Leap' series?