Last summer we learned that special effects master and The Walking Dead director/producer Greg Nicotero was developing a new version of Creepshow — the horror anthology film from George A. Romero and Stephen King — as a series on horror streaming service Shudder. Now, we've learned that the new Creepshow will finally give us a major adaptation of one of King's most disturbing short stories.

Production Weekly reports one of the segments of the new anthology series will be called "Survivor Type," and unless there's some kind of insane and very unlikely coincidence, that would mean Nicotero is adapting the King story of the same name. Longtime King readers will know what that means, but if you're not familiar with the story...well, just hope you have a strong stomach. 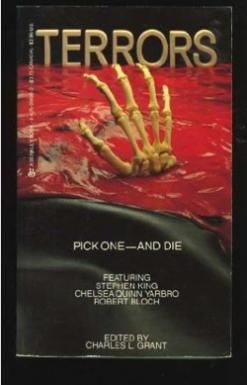 Originally published in the 1982 anthology Terrors and later collected in King's 1985 short story volume Skeleton Crew, "Survivor Type" is one of King's more realistic horror tales, and takes the form of diary entries from a surgeon named Richard Pine. Pine, having disgraced himself as a surgeon, is attempting to smuggle heroin onboard a cruise ship, which suddenly sinks and leaves him stranded on an island with no food. After breaking his ankle, Pine amputates his foot and decides to eat it to survive. With few tools other than his own surgical skills and heroin to dull the pain, Pine tries to figure out what other parts of his body he can live without in order to stay alive on the island.

The diary entires offer flashbacks to Pine's days as a doctor, so we can see how far he's fallen, and the horror kicks in as his mental state begins to waste away along with his body. It's exactly as disturbing as it sounds, and even the most jaded of King fans can still come away with a chill after reading it.

Because of its rather gruesome subject matter, "Survivor Type" hasn't really been given a major stage for an adaptation just yet, aside from a couple of short films. In Nicotero's hands, and with Shudder's wide audience, the story will finally get its due in front of droves of hungry horror fans. Just, you know, bring a strong stomach.

Creepshow is expected to arrive on Shudder later this year.