After 15 years and nearly 200 issues, The Walking Dead is suddenly over. Bleeding Cool first reported Monday, and The Hollywood Reporter has since confirmed, that this week's issue #193 is the surprise finale for the series, which first debuted in 2003 and has since become one of the most popular and profitable comic books of all time.

Created by Robert Kirkman and Tony Moore and steered since issue #7 by the team of Kirkman and artist Charlie Adlard, The Walking Dead is the story of an ever-changing group of survivors as they attempt to navigate a zombie apocalypse in which the humans are often scarier than the undead. Since its inception The Walking Dead has grown into one of the most popular ongoing comic book series of all time, and it's one of those comics people often recommend to people who don't even read comics. 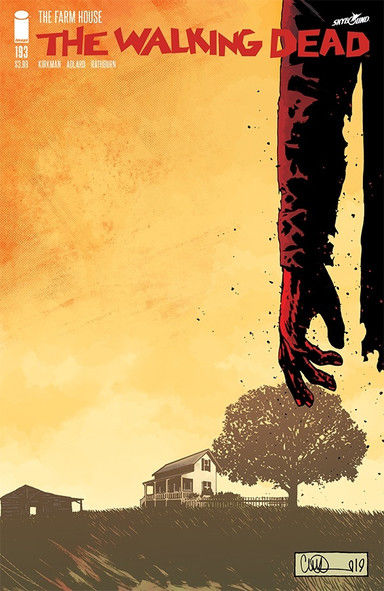 As with so many things in The Walking Dead, the surprise ending was a closely guarded secret, so much so that Image Comics had already released solicitations for dummy issues following #193. It was only when early copies began to get in the hands of various readers this week that the truth came out. The finale issue acts as an epilogue to the story of Rick Grimes, who was confirmed dead in issue #192 after he was ambushed in his bedroom and shot in the previous issue. Though there were no outward indiciations that Kirkman wouldn't continue the story in Rick's absence (after all, the TV series is already doing that), it seems that in the comics at least, The Walking Dead dies with Rick Grimes.

"The Walking Dead has always been built on surprise. Not knowing what’s going to happen when you turn the page, who’s going to die, how they’re going to die... it’s been essential to the success of this series," Kirkman wrote in the concluding pages of the issue, via THR. "It’s been the lifeblood that’s been keeping it going all these years, keeping people engaged. It just felt wrong and against the very nature of this series not to make the actual end as surprising as all the big deaths ... from Shane all the way to Rick."

This may be the end of the comic book side of things, but it's certainly not the end of The Walking Dead as a multimedia powerhouse. The two TV series — The Walking Dead and Fear The Walking Dead — are continuing on AMC, with a third series reportedly on the way. Plus there are those Rick Grimes movies in development, and who knows what else the live-action side of things might cook up. And, as always, Kirkman could surprise us yet again and decide to return to the world he created with spinoffs, prequels, or other linked stories in the realm of The Walking Dead. That was always the fun of this story, as Kirkman himself said. You just never know.

UPDATE: AMC Networks, the TV home of The Walking Dead franchise, released a statement on the comics series ending on Tuesday, via The Wrap.

“This extraordinary comic created a world that already lives in multiple forms, and in the hearts and minds of millions of fans around the world, and will for many years to come,” the network said.

'The Walking Dead: World Beyond' may have just revealed the mysterious CRM's master apocalypse plan