It seems a little redundant to make a list of featuring comic characters in swimwear because most of them, especially the women, are usually already wearing costumes that could double as something that could be worn to the pool. However, it’s the summer, and there are plenty of reasons to be thirsty, and comic characters in their best beach-ready outfits provide the perfect opportunity to exhibit some of that thirst.

Everyone knows bionic arms go great with swimsuits, but in case you were unaware, Misty Knight is here to remind you. Also! She punches sharks while wearing a two-piece swimsuit and has a midsummer tryst with Daredevil in it too, which is all iconic behavior.

This is one of a few gems from those infamous Marvel Swimsuit issues. Honestly, this particular image could provide all the justification of Namor’s name on this list. Did you know he was the first mutant and the first person to invent speedos? Well, maybe he didn’t create them, but he damn sure did more for them than most could ever dream of doing. The winged ankle prince’s motto is, “You can’t rule the seas if you aren’t sexy.” It’s more than understandable why Sue Storm visits from time to time.

Ororo Munroe would be the first to tell you she has no problem floating amongst the rain clouds in her birthday suit, so of course, she would look amazingly confident in a swimsuit. Not to mention half her costumes have been swimsuits with a cape added for a little mutant razzle-dazzle. Storm is essential for a good day on the beach.

Monica Rambeau’s glow is unmatched, whether her powers are on or off. She could easily be increasing the value of someone’s yacht by just being present on the deck instead of doing the noble superhero thing. Bikini-clad Monica charming her way onto a yacht with espionage intentions? Just another reason why her origin story is one of the best among Marvel characters. Something about Monica’s whole look screams Jet Beauty of the Week, and we absolutely love that for her. 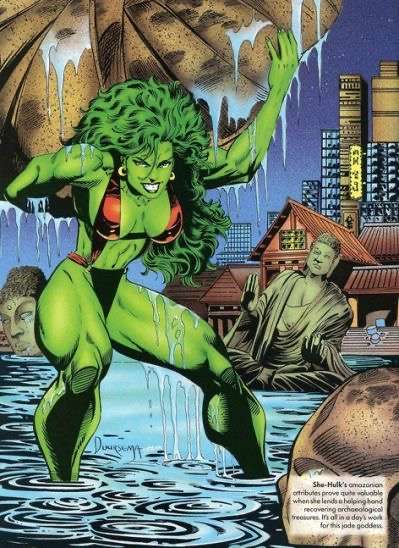 What’s sexier than a woman who could destroy an entire city without breaking a sweat? Exactly. She-Hulk and all her tall muscled glory screams put me in swimwear. But catcalling her on the beach could mean there’s a good chance you’d get a put through a brick wall like Hercules, and it would be what you deserved.

Where do we even begin with Mr. Adamantium? As long as he’s been alive, he’s probably had swimsuits from every decade. Logan’s worn everything from the rompers of the 1900s to the infamous Pooka necklace paired with Hawaiian print swim trunks, which makes him perfect for this list because there is so much to choose from. If we had to have our pick, we’d go with the itty bitty shorts he wore while straddling a shark on the cover of Wolverine #41.

A Dick in swimwear should be enough of a selling point for the owner of the fattest ass amongst the Bat-Family and one of the best asses in comic character history. Dick was literally created to be in a swimsuit despite Bill Finger, Bob Kane, and Jerry Robinson's intentions. It's a shame the beaches of Gotham city are probably more hazardous than the poorly regulated Acme warehouses, all of which you can blame on Batman/Bruce Wayne. Good thing there are other beaches, and Dick Grayson blesses them with his presence even if it's for a mission and not for pleasure. The point is it's for us to enjoy the rare glimpse.

The Marvel Swimsuit issues are one of a kind. There is plenty to cringe at but also a fair share of things to be in awe of, too. One of them is a bikini-clad Typhoid Mary. The best part of her entire look is the hair. It’s full of body, which explains why she bodied this whole look.

You could walk on the beach, or you could ride atop the shoulders of the mutant version of a McLaren 570S Coupe wearing a pair of leopard print speedos. Piotr, in his organic steel form, adds some spice to his overall beach look. He looks cool and refreshing, and who doesn’t want that on a hot summer day. 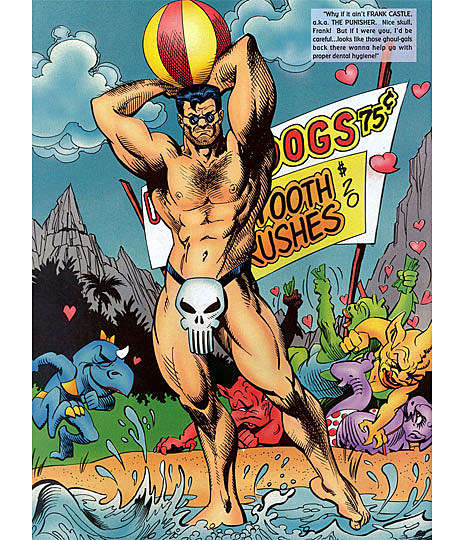 To be frank, The Punisher is on this list for two reasons, the skull g-string swim bottoms and the lack of weapons. Frank Castle stays packing, so you have to wonder where he’s keeping his other firearm when he’s wearing so little. Also, a Punisher not strapped from the neck down in weapons is a Punisher we can get behind... to apply sunscreen, of course.

Unfortunately, there aren’t any comic issue panels with Amanda Waller relaxing poolside, but you better believe The Wall would be doing that at some point after a successful Suicide Squad Mission. Amanda would look damn good in her swimsuit and signature kitten heels. She strikes us as someone who would also keep her ankle strapped with a 9mm just in case anyone dared to interrupt her poolside peace.

Time Travel apparently does the body well, according to Bishop in his speedos. The placement of the X-Men logo has not an ounce of subtlety, but then again, when does Bishop, especially when he’s just popping up in the past armed and ready to prevent a war?

Vixen is a supermodel. Case closed.

While most might believe the beach is best enjoyed during the daylight, Morbius would like to have a word with them. There are several points to be made in favor of some nighttime beach fun, and the biggest involves not getting baked by the sun. Not everyone needs the sun to help show off their swimsuit, just look at Morbius' alabaster skin illuminated by the moonlight. A true beach king of the night.

Princess Koriand'r's impact on the tanning lotion industry is unmatched. Never has anyone looked so good in a swimsuit with orange skin.

Honorable mentions to the Atlantians and their King. Arthur, Orm, and Mera make wetsuits look like the perfect choice for a relaxing day on the beach — plus, they're a way to stay ready, so you don't have to get ready, since you never know when Black Manta will strike.

It was tremendously difficult to pick amongst the telepathic mutants of the X-Men comics. The only reason Emma Frost isn’t on this list is simply because Psylocke looked so good in her swimsuit that she got Scott Summers to risk it all in front of Jean before Emma could.

We lied. There is no way we couldn’t include Emma Frost on this list. After all, it’s not an all-white pool party until the White Queen herself has arrived. Emma Frost has been giving Omega-level poolside lounging vibes for decades. Plus, diamonds look good next to some chlorinated water. 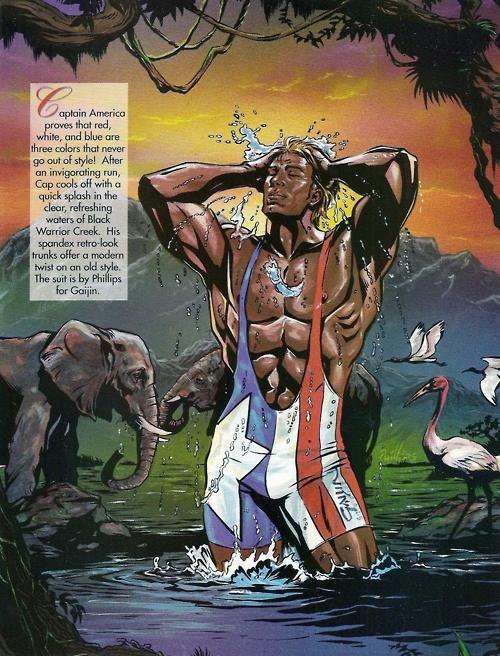 This list could not be complete without Captain America. Steve’s ass was made for a pair of speedos, and to be quite honest, anything that’s going to allow that ass to be as free is the real Steve Rogers way. It would be a waste to inject someone with a super-soldier serum, and then not put them in swimsuits as frequently as possible. However, we need to have a conversation about this tan. Now either the super-soldier serum gives a melanin boost, or Steve needs to lay off the tanning lotion.