Netflix hit Stranger Things has been credited with sparking a resurgence of Dungeons and Dragons interest in pop culture since its first season’s plot hinged on its heroes’ familiarity with the role-playing game. The show even opens up with the boys playing a session in the first few minutes. Now, thanks to Hasbro, geeky fans can go full Inception and play a version of D&D that references a show that features heroes that can only beat the monster because of their references to D&D. If you got all that, you’re ready to pre-order.

The starter set became available for pre-order on Amazon today, allowing players to order the nostalgic-looking game and “hunt for the thessalhydra” for $24.99.

The box is the classic '80s red and comes pre-distressed, looking just like that set your nerdy parents played with when they were young. With two Demogorgon figures (one painted and one not) augmenting the traditional dice and rulebooks that are included in any starter set, the game looks to reflect not only the show itself, but the game that Mike Wheeler was running in-show for his fellow characters.

It even comes with character sheets for those characters’...well, characters. You know, Will the Wise and Dustin the Dwarf? You remember this scene:

The game comes out (or ships, if you order early) on May 1 while Stranger Things returns to Netflix for its third season on July 4 - just enough time to get a character up a few levels. 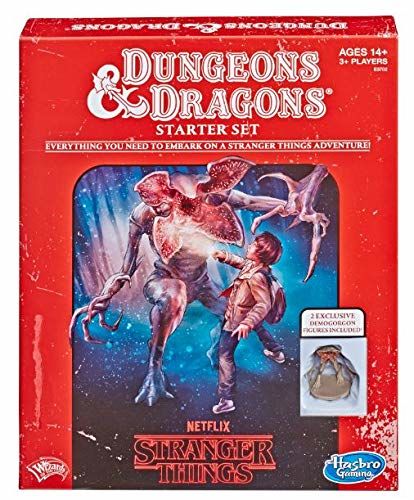 ‘Fizban's Treasury of Dragons’ adds ghost dragons, liondrakes, and much more to D&D

Marvel’s M.O.D.O.K. canceled by Hulu after one season