Netflix is fast-becoming the go-to hub for horror fans who think they've seen it all. Today, the streaming giant, in partnership with Blumhouse, surprised audiences once again with Thriller, an upcoming urban slasher flick inspired by genre classics like John Carpenter's Halloween and Paul Lynch's Prom Night.

After a childhood prank goes deathly wrong in South Central Los Angeles, kind-hearted Chauncey Page (Jason Woods) is sent to juvenile hall. When he's released four years later, he's not so nice anymore and is hell-bent on getting revenge on the kids (now sexy teenagers) who sent him there in the first place. Oh, and it just so happens to be the weekend of the prom when he begins to pick them off one-by-one.

Check out the trailer:

Written, directed, and produced by Dallas Jackson, the movie filters the horror through a lens that refracts issues of race. Nowhere is that self-aware subversion more prevalent than the moment in the trailer when one of the teens tries to warn a police officer, who says: "You sound like one of those paranoid white girls in the scary movie."

"Thriller isn’t just another slasher film with the novelty of an urban setting and black lead characters," a press release teases. "Thriller reevaluates and translates the traditional slasher film story from its roots in 1970s white suburbia to the lives of African-American teenagers experiencing racism, violence and an unforgiving cityscape in modern-day Compton, CA."

Here's the poster for the film as well: 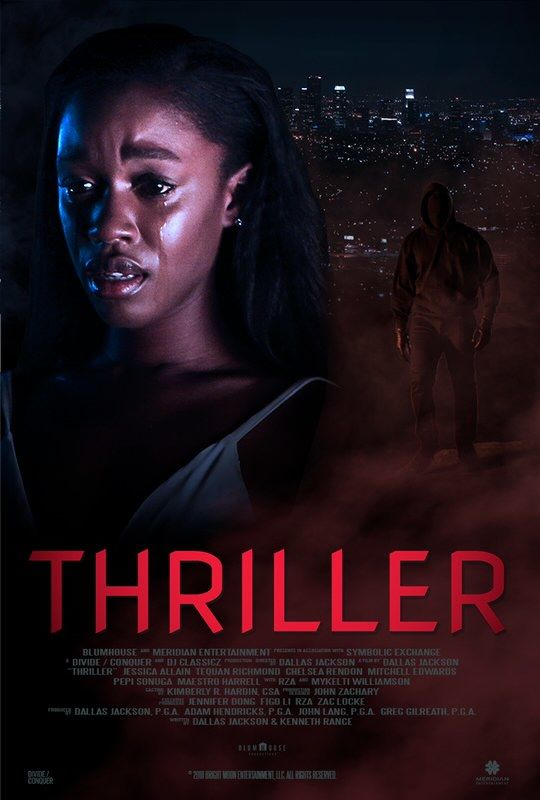 This is the latest surprise release from Netflix and Blumhouse in recent weeks, the first one being the debut of Mercy Black. Similar to that Cloverfield Paradox stunt pulled two Super Bowls ago, Netflix can generate instant viral marketing with no prior teasers or marketing materials. It's quite the remarkable feat.

That being said, the novelty can certainly wear off, especially if these movies are not up to the standards of what a mainstream studio would be confident to widely release in theaters. Sadly, not every film is foolproof.

Thriller drops on Netflix this on April 14.