Important Toy News: Baby Yoda is back and Godzilla Monopoly is perfect for quarantine

So kick back, get ready to shop (online, of course, because it's quarantine time), and get ready to dive into that (albeit virtual) toy box with your resident, if not favorite, Toy Journalist.

Remember like, eight weeks ago when the world was normal, people weren't sick and on lockdown, and every single toy announcement from The Mandalorian was something amazing that we had to get right now and therefore preordered it with glee? Well, that's a distant memory, because another new Mandalorian toy was announced, but this time, not only is the world on fire, but in regard to this toy, we can't have one.

When Sideshow Collectibles dropped the news of its life-sized Baby Yoda (The Child) figure (that I promptly preordered), there were rumors that Hot Toys would be making its own version. It seemed a little unlikely that Hot Toys would make a competing life-sized Baby Yoda moments after Sideshow — a company it works with constantly — announced its own. But toy fans kept an eye out.

Well, the rumors were true, and Hot Toys did indeed make a Mandalorian toy. Except ... online preorders are sold out everywhere as of this writing. Still, behold this 1/6-scale (about 6 inches of Mando pleasure) figure in all of its perfectly sculpted Hot Toys majesty. It's a pretty one, and I might just bite the bullet and get this father-baby duo if preorders open again. 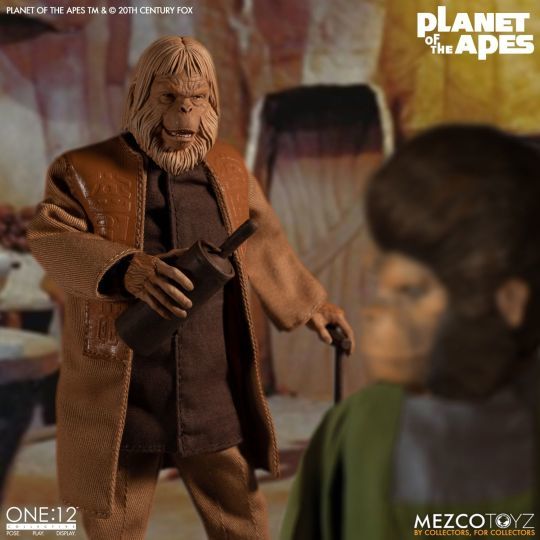 Oh man ... if Mezco Toyz could get the rights to make a Simpsons-style Dr. Zaius figure from the faux musical, that would be amazing. This toy of the actual Dr. Zaius from the original Planet of the Apes movie is pretty cool, too.

Via Mezco Toyz, "Leading member of the Ape National Assembly, the One:12 Collective Dr. Zaius is outfitted in a tunic shirt and overcoat with embossed detailing, and pleated pants. Included is a miniature polystone Lawgiver statue, the central orangutan prophet deity. The Chief Defender of Faith comes with a range of accessories as seen in the film such as a human doll, walking cane, two Sacred Scrolls, and a paper airplane."

The One:12 Collective Dr. Zaius costs $85, ships October-December 2021, and is available for preorder today. 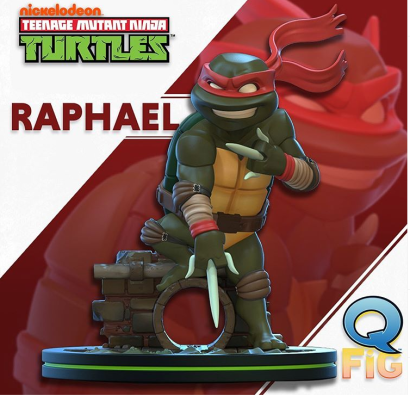 Let's talk about Quantum Mechanix, my newest toy-collecting obsession. It makes these awesome little dioramic statues in the $20-$30 range called QFigs. They're stylized, come ready to display on a base, cover a bunch of different pop culture franchises, and are just neat as hell. And now those turtle boys won't cut us no slack.

With the reveal of two Ninja Turtles QFig statues down, Quantum Mechanix announces the following via Instagram: "Cowabunga! Teenage Mutant Ninja Turtles are coming to QMx! Tune in all week long to see the heroes in a half shell revealed and learn more about our amazing new TMNT Q-Figs. Collect them all this summer!"

We are totally stoked to see Leonardo and Michelangelo revealed, too, likely in the not-too-distant future. We are also predicting that these Turtle QFig statues will be in the 4-inch $20 range like their brethren that came before. I think it's great that QMX is using the newer versions of the Turtle — variety is the spice of life.

Fans of Neon Genesis Evangelion have been waiting for a new version of Eva 01 in model kit form basically like forever now. We are finally getting that wish with a Real Grade Evangelion Unit-01, in both regular and Deluxe form. The Eva kit is the same in both kits, and the DX set has both the Eva and the platform in one box.

You can order it for $51.99 today from BigBadToyStore. It is shipping this month and is an excellent activity to do while in quarantine, as it will take you a billion years to complete. This is the way when it comes to Real Grade model kits. Remember that adorable, aged-down Pikachu model kit we discussed last week that you could build in about 20 minutes? Yeah, this is the opposite of that.

We've reached the end, my quarantined toy-loving friends, and since we're all locked up together, let's talk about another never-ending story!

It's the game of Monopoly, but not just any version! By the time you see "your town here" Monopoly at Walmart, you would have to assume that everything was already made. But nope, out of the storm clouds comes something special — it's Godzilla Monopoly! Any hardcore Godzilla fan will tell you that they are fine with owning another board game they will never play.

The artwork on the board is a little cheap and lowbrow, honestly. I'm sure any Godzilla lover would question why Monopoly makers wouldn't just use art from the original films. If I ever get around to playing this, I already claim Mechagodzilla. Unless they have Jet Jaguar and Zone Fighter — those two are my cool robot boyfriends. Which is something we all have, right? You'd better believe I'm glancing over at my IG-11 and custom Tik-Tok from Return to Oz figures literally as we speak.