So keep saving those shekels because we are diving back into the toy box for yet another delightful week in toy news. Come on an epic toy-hunting odyssey with me, your resident, if not favorite, toy journalist.

Because now, my toy-loving friends, the spooky season is beginning to descend upon us.

Are you ready to run amok? Then light the black flame candle, virgin! Because Ravensburger is giving all of us quarantined goobers something to celebrate this Halloween season with the amazing new Hocus Pocus board game!

In this cooperative card game, players work together to protect Salem’s children and stop the Sanderson sisters from completing their wicked potion before the sun rises. Along the way, Binx will, of course, offer a helping hand, while Winifred, Mary, and Sarah cast spells to thwart your plans.

You can order your own copy today for $19.97 from Amazon. 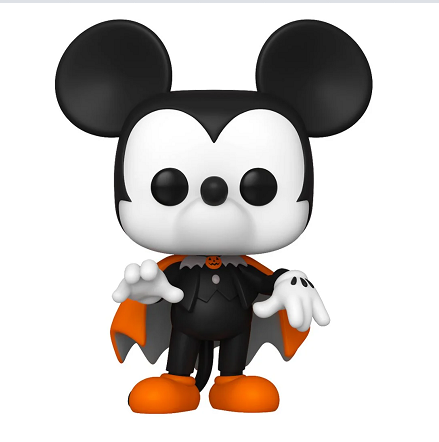 Disney's Mickey and Minnie Mouse are getting ready for some Halloween fun with these new vinyl figures from Funko! I absolutely adore these toys. Each costs $10.99 and will ship in October 2020.

You can get Mickey dressed up like a vampire or Dracula sort of dude (though we don’t have any fangs?) or Minnie dressed as a witch. I really like how these toys have only four colors — black, white, gray, and touches of orange. Mickey’s cape clip reminds me of Jack Skellington’s tie, and I love the gentle in-motion quiet stillness presented on the Minnie witch. She’s even perched on a stand so it looks like she’s flying!

You can preorder Mickey right here, and Minnie right over here from Entertainment Earth.

Segueing from Halloween but still keeping it Disney: Do you remember last week when we announced Funko was teaming up with Disney to celebrate the Happiest Place on Earth’s 65th anniversary? Well, you know what would be even happier? If I told you that a whole new wave of Disneyland-inspired Funko toys has officially dropped.

I really hope you read that to the tune of “A Whole New World”!

I’m such a sucker for Peter Pan that the Pan and Hook Pop!s might have to be Mine, Mine, Mine. (I wish you could see the lopsided grin on my face right now — I'm so amused from making these Disney song references.)

This new wave of releases (due out between October and November 2020) consists of Peter Pan, Peter Pan in a seat from the, duh, the Peter Pan ride, Captain Hook, Mr. Toad with spinning eyes, Mr. Toad in a car from the Mr. Toad ride, and Minnie Mouse on the Flying Dumbo ride. 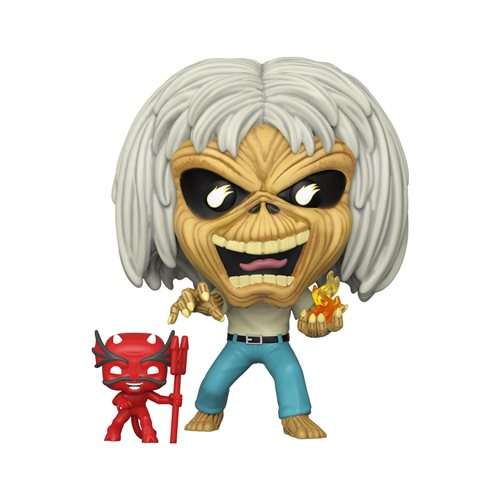 There won’t be any wasted years happening with these amazing Pop! vinyl figures, Trooper! You’ll be counting one to four numbers of the beast with these incredible Eddie toys, the incredible (and highly recognizable) Metal Mascot from the one and only Iron Maiden, each one inspired by a different Iron Maiden album cover. Four aces, you say? Then Aces High! With Eddie by your side, there will be no need to have a fear of the dark.

Each of these pieces costs $10.99 and is shipping in November 2020. Included in this wave are Number of the Beast Eddie, Killers Eddie, Piece of Mind Eddie, and Self-Titled Eddie.

Hey — wanna see the cutest thing in the world? Then it’s a good thing Kidrobot has it ready for us!

Whoever has that Cup Noodles license is a genius because some amazing merchandise for it is coming out now! First that incredible model kit (that I totally preordered) and now these adorable Hello Kitty x Cup Noodle plush. I’ve always been a fan of the chicken flavor, so I have a bias toward the adorable that is the yellow baby chicky plush. But they’re both awesome, so I might need to cuddle both.

KINGPIN BOWLS US OVER

We’re hitting the end, my cool collecting friends, and it wouldn’t be an issue of Important Toy News without... you know it... Superhero Toys!

Let’s kick off with a baddie that is just too good. Coming soon from Hasbro, you still have a chance to get the Kingpin. This new Retro Packaging version calls back to the great '90s Spider-Man cartoon. With Hasbro releasing more and more figures in these retro packaging-styled paint apps, you will need to act quick before they are all gone. This mold, a former build-a-figure, has a much nicer look with the animated colors and not to mention not having to find all of those other figures to complete. No collection is complete without the Kingpin of Crime. He costs $29.99, ships in November 2020, and can be ordered from Amazon today.

And finally, the amazing Japanese toymaker, Kotobukiya, is showing off a beautiful Harley Quinn statue. The main star from Birds of Prey (and the Fantabulous Emancipation of One Harley Quinn), who never disappoints with her outrageous and crazy action, Harley Quinn, makes her debut in Kotobukiya’s ARTFX series lineup. Via Kotobukiya: “With her sharp and daring glare, this ARTFX statue completely captures the essence of this colorful little devil. As seen on past ARTFX DC statues, the film’s title logo decorates the base. Harley Quinn can be displayed out of the box with minimal assembly required”.

This Harley Quinn statue from Kotobukiya costs $159.99, will ship Q1 2021, and is available for preorder from BigBadToyStore now.

It's a fan thing
Join SYFY Insider to get access to exclusive videos and interviews, breaking news, sweepstakes, and more!
Sign Up for Free
All Posts About
Features
Games
Disneyland
Funko
Hocus Pocus
Important Toy News
Mickey Mouse
toys
You May Also Like
Recommended by Zergnet
Latest on SYFY WIRE