So rearrange your shelves, my toy collecting friends, and dive back into that toy box. Your resident, if not favorite, Toy Journalist is going to take you for a ride into the Collector's Lair. It's not a real place, but a headspace, where excitement lives when we see a toy so beautiful that it needs preordering upon sight.

And seriously, that's what happened to us this week after inhaling that beautiful retro-scented aroma of nostalgia and childhood. 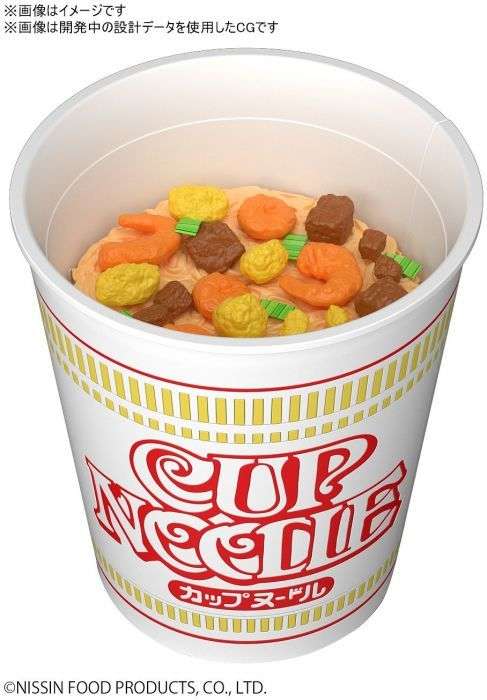 Our first toy today is something that made me freak-out-scream with joy the moment I saw it. Sure, you may associate childhood with the toys we used to play with or the shows we used to watch, but what about the foods we used to eat?

I don't know about you, but one of the edibles that remind me of being a kid is Cup Noodles! And the brilliant people over at Bandai (makers of mind-blowingly intricate model kits) are making a model kit that is a 1:1 life-sized scale replica of Cup Noodles. And yes, I preordered it the second I saw it.

It makes me wonder what other food-inspired model kits are coming out of Japan, but this is a fantastic kickoff. You can order Bandai's life-sized Cup Noodle Model Kit today for $25.99 and it will ship October 2020.

Ready to keep this nostalgia ride in high gear? Then get ready for this one, because there has never been anything this good. It's Inspector Gadget (yeah, you have that theme song stuck in your head now, too) and he's finally getting the love he deserves from the awesome people over at Blitzway. And yes, this was another “instant preorder” on my end.

This incredible set from Blitzway costs $188.99 will ship February 2021. You should really buy it because there will never be another Inspector Gadget set this nice again. The four-pack includes Gadget, Quimby, Penny, Brain, a standing platform, and some sound effects pieces to display behind them.

If the price is too much at once for fans, you can order the items separately. Gadget and Chief Quimby come in their own stand-alone packs, while Penny and Brain are a two-pack together.

YOU KNOW THAT NEW GAME YOU'RE LOOKING FOR?

Remember when life was simple, there was no internet, and boredom could be solved with a board game? Well now we can hit two nostalgic birds with one stone with the new Back to the Future: Dice Through Time game from Ravensburger.

The premise of the game? Biff stole the DeLorean and went on a joyride through time, disrupting events, and scattering items throughout the wrong decades. Now, we must help Doc and Marty repair the space-time continuum.

Featuring fan-favorite events and moments from all three movies, this collaborative dice game will be available exclusively at Target starting June 21, just in time to celebrate the 35th anniversary of the first film. It costs $29.99 and can be preordered today.

A TOY 65 MILLION YEARS IN THE MAKING

Picture it: The year was 1993 and Jurassic Park was the movie that everyone was freaking out for. I remember kids in my second-grade class getting pulled out of school to see this movie in theaters. And now one of the film's most iconic moments — when the guy from Seinfeld gets his comeuppance — has been immortalized in toy form.

Inspired by a scene from the original Jurassic Park film, this figure of villain Dennis Nedry is approximately 6 inches tall and captures the scene when he flees and encounters the spitting Dilophosaurus (that you can order separately here!). The figure, which costs $26.99 and is available for preorder now, also includes film-inspired accessories including the Barbasol can with dinosaur DNA vials (two pieces), an extra pair of swappable hands, allowing him to hold the can, and an extra swappable head to show Dilophosaurus poison spray on his face. It also includes a display stand for the figure.

San Diego Comic-Con 2020 might be a little different this year, but we are still seeing some exclusives sneaking out. Here, Diamond Select Toys is giving TRON fans something to be excited about.

This Diamond Select figure is sporting colors based on the old VHS packaging, and comes packaged in a real VHS-style box! The figure is articulated and measures in at 7 inches. It has a unique reaction to black light and comes with multiple identity discs with energy effects. It costs $39.99, will ship August 2020, and can be preordered today.

I don't know about you, but I have a soft spot for female warrior babes and action figures, especially figures of female characters from the '80s. Which is why this Transformers War for Cybertron: Earthrise Deluxe Arcee has struck me right in the robotic soft spot.

Instant preorder? Don't mind if I do. Especially since that gorgeous Masterpiece Arcee that was recently announced (and mostly sold out) is a little out of my money scope this week. This one is more reasonably priced.

HE-MAN AND THE TOYS OF THE UNIVERSE

We're at the end, my toy loving friends, and we will wrap with a little toy news story involving '80s beefcake He-Man and the Masters of the Universe. As many toy collectors are aware, Mattel announced the new MOTU Origins line last year. This toy line is inspired by the classic vintage '80s toys, but with new paint and modern articulation. Great, sounds wonderful, we love it. We knew that we would be seeing the figures sometime in Fall 2020, but it's been pretty quiet. Until now, that is.

A German online toy store called ActionFiguren24 revealed the complete line of MOTU Origins figures and allowed fans in that part of the world to preorder them at once. Okay, great, but what about the rest of us? Here in the U.S., these toys are Walmart exclusives. And if you're a toy collector trying to get your hands on Walmart exclusives, you know the experience is nothing short of miserable. But word around the playground is that Walmart is getting ready to make preorders for Origins live on its website, and this place-holder link for He-Man seems to confirm the rumors. It is not truly out of stock — it's just not active, so bookmark the page and don't let it scare you.

An Amazon UK link has the new He-Man power sled available for preorder and nothing else. We are not positive when MOTU Origins preorders will come onto the scene, but when it does, the screams of joy amongst toy collectors will be louder and more excited than Skeletor's signature cackle.