And seriously, what a week it has been! Join me, your resident if not favorite Toy Journalist, as we take our weekly dive back into the toy box and ask that burning question — Will I regret every choice I've ever made in life if I do not pre-order that collectible? Take it from me: The answer is yes. Which is why we will turn coins into toys together, or perhaps coins into gems. And fortunately, one of our reveals has plenty of Nano Gauntlet space for you to hold your gems. But first, since we are on the topic of all things Marvel, let's take a moment to drool over the freshly revealed Avengers Campus Merchandise and Collectibles coming our way next month!

The Avengers Campus, coming to Disney California Adventure on June 4, 2021, will be stuffed with immersive Marvel-infused experiences, attractions, and (of course) collectible merchandise! Via Disney Parks Blog, there are three huge standouts at Avengers Campus, so let's give them all some love. First up is the attraction called WEB SLINGERS: A Spider-Man Adventure. You slide on your 3D glasses, gear up with a customized web-slinger that goes on your wrist and let the machine do the rest of the work — this experience actually memorizes your body movements! Next up in Avengers Campus merchandise reveals are the Spider-Bots. These little spidery sidekicks respond to your commands with programmed combat and defensive abilities. I'm thinking Robot Marvel Pokemon battles already! And, what collectibles experience would be complete some exclusive Funko Pop! vinyl figures?! The first reveals are new Spider-Man and Iron Man molds, which float in suspension with metallic paint and swooping, animated poses.

Do you love prop replicas? Then Hasbro's Marvel Legends Iron Man Nano Gauntlet is coming at you! For many years, Bandai was the "Proplica" winner – the Japanese toymaker had produced so many wearable props for their fans, most notably from Kamen Rider and Sailor Moon. Sure, cosplayers have been making their own props for years and prop-making companies have been producing very high-end props that come at a premium price. But we really have to hand it to Hasbro over the past few years for making these really cool prop replicas that average fans can wear and actually afford. As for the specs on this Iron Man Nano Gauntlet, what does it do? This 1:1 scale electronic fist stands 18 inches tall, features flexible finger articulation, lights, and sounds, including movie-inspired snap, and six removable light-up Infinity Stones. You can preorder yours today for $124.99 from Hasbro Pulse and it is shipping out in November 2021.

On the topic of Marvel Legends, we've got to check out the second reveal from Hasbro this week because it is a big boy—quite literally. From the Marvel Legends Infinity Safa, Hasbro is showing off the Surtur from Thor Ragnarok. Now, upon first glance, you might be thinking "Why would a 6-inch toy cost $52 flippin' dollars?" It's not. No, this sucker is in 6-inch scale, meaning it towers over 6-inch figures in the same scale as this beefy boy does for characters in the movie. Fans are getting 13 inches of toy collecting glory. Surtur features multiple points of articulation and features a sword accessory in addition to movie-inspired details. He is sold out on Hasbro Pulse but you can still order your own from Entertainment Earth today.

AN AMERICAN TOYWOLF IN LONDON

NECA are masters when it comes to horror toys (or in this case, horror-comedy?) and their newest addition is no exception. NECA is giving fans of An American Werewolf in London an action figure version of David Kessler as the werewolf. It features over 30 points of articulation and at its full length is over 11 inches long. Much like the Surtur we just discussed above, this werewolf is in the 7-inch scale, meaning he is the correct size and scale as the movie wolf would be next to an average adult. This werewolf collectible figure is shipping to fans in September 2021, and for about $35 you can preorder your own today.

Scorpina makes her action figure debut in this two-pack — she's just not a character that was ever given the toy treatment unless you count Fisher Price's Imaginext line... which I kind of do because I have many of those Power Rangers and think they are fantastic. But since Scorpina was such an important (and freakin' awesome) side character in MMPR it is bonkers that Bandai never made a toy of her back in the day. That's all changed with Hasbro and we can't wait to get our hands on this two-pack! You can purchase most of these newly announced figures over at Hasbro Pulse, and the ones that are sold out are still hanging out at Entertainment Earth and BigBadToyStore. 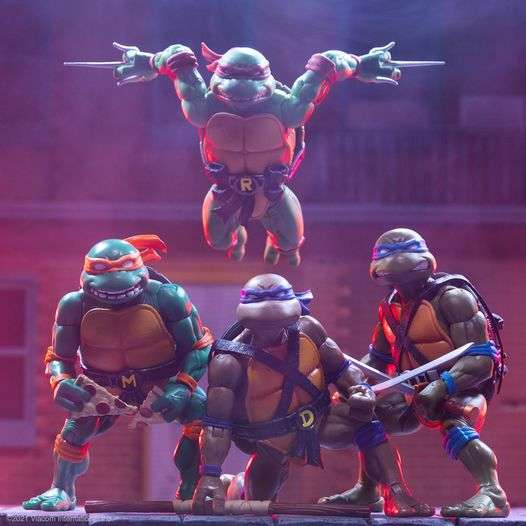 We've reached the end, my toy-loving friends, and we are going to wrap with some radical news from beloved indie toy maker Super7! Creators of all things awesome and fantastic quality to boot, Super7 is showing off its newest wave of Teenage Mutant Ninja Turtle Ultimates action figures. "We are now on our FIFTH wave of Teenage Mutant Ninja Turtles ULTIMATES! Figures," Super7 said in an official press release. "And listening to the fans and new collectors who missed out on our earlier waves, we reached the only logical conclusion: we needed to make the four main pizza lovin' dudes available to everyone once again!" Which is why TMNT Wave Five is dedicated to the original four heroes in a half shell, Leonardo, Michelangelo, Raphael, and Donatello. Super7 figures are made to order, which means the number of toy orders that are placed during the open preordering window is the number of figures that will be made. This model ensures that everyone who wants a figure can have a figure, but unfortunately creates much demand on the secondary market for those who were late to the party. (There is always one, who did not know that the party was today). Preorders close on June 1 and fans can expect these beauties to ship by January 2022. So make sure you order yours directly from Super7 today.

‘Reginald the Vampire’ gets an unlikely origin story

'Reginald the Vampire' stars break down the premiere