Get ready, my fellow lover of toys, because we are heading right back into that toy box for another week of newly announced toys and collectibles that are heading your way soon. Join me, your resident if not favorite Toy Journalist, while we collect all of the things we love in toy form! Follow me back to the toy box and let's see what treasure awaits us!

Iron Studios is best known for creating pop culture statues at a premium price. Out of all of their statues, my personal favorites in their inventory are, without a doubt, their Star Wars pieces. And this week, Iron Studios revealed not one, but two breathtaking Star Wars-inspired works of art. With that in mind, we have no other choice (like, seriously, twist my arm) but to highlight both of them.

First up, we are gawking at a gorgeous Jabba the Hutt statue. As someone who does not actively collect Jabba pieces (I save that loyalty for Palpatine and Anakin…and now you know too much), this would be the only piece I needed in my collection to adequately celebrate the big blobby greasy crime lord caterpillar monster man. Iron Studios' statue is 1:10 scale meaning that it is 9 inches tall by 15 inches wide by 7.8 inches deep. He costs $529.99 and weighs a whopping 11 pounds. As for the specs of this hand-painted polystone bad boy? Via Iron Studios, Jabba the Hutt "sits between fur cushions with a rustic hookah beside him, for his smoking pleasure, next to his mascot, and court jester, Salacious B. Crumb, a creature known as the Kowakian lizard monkey."

Coming in second at a much more affordable $149, Iron Studios is helping us celebrate the wonders of fatherhood with The Mandalorian's Mando and Grogu 1:10 scale statue. If this statue isn't just the most wholesome thing in the world! Also hand-painted and made of polystone, this Mando and Grogu statue stands 8.6 inches tall by 4.7 inches wide and 3.5 inches long. Unlike Jabba, who is a shelf-shaker, this statue only weighs 1.2 pounds. Every last detail of Mando's Beskar armor has been replicated — it's almost enough to fill the Mandalorian-shaped hole in our hearts while we wait for Season 3. Almost. This statue will ship in the second quarter of 2022. TBD on when to expect the third season. 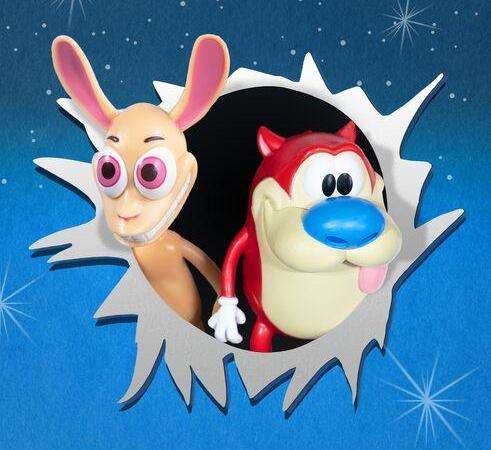 Oh, Joy! A year after Super7 unleashed their Ren and Stimpy Ultimates unto the world, the independent toymaker is showing off a new reveal — the Ren and Stimpy ReAction figures are finally available to purchase! These are the ones I am going to collect, personally. I purchased the Ultimates last year and I just thought it was too much toy. The seams were thick, the paint was uninspired, and I thought there were small nuances that Super7 just didn't nail. But at a (nearly) 4-inch scale and completely stylized, I think the Ren and Stimpy ReAction figures look astounding. The wave comes with Ren, Stimpy, and Powdered Toast Man. Hopefully, we get more characters in the ReAction line. Maybe Ren in the Happy Helmet, Muddy Mudskipper, or Ren's cousin Sven Hoek. I know we're all waiting for a Mr. Horse, and if we don't get one we can rub our chins thoughtfully, furrow our brows, jut out our jaws, and declare "No sir... I don't like it." Pick these up directly from Super7 for $18 each today!

Hasbro has announced a new Transformers exclusive for Amazon — yet another Sideswipe and Maximal Skywarp, specifically from the Cybertron Kingdom Battle Across Time Collection. While I do type "Another Sideswipe" with a smirk and raised eyebrows, the fact of the matter is that these Transformers Exclusives almost always sell out and become highly sought out collectibles on the secondary market. Via Hasbro, "The Battle Across Time Collection allows fans to experience the clash between G1 and Beast Wars with Maximal and Autobot team-ups! With Scorponok in pursuit, Sideswipe and Skywarp must team up to keep the Decepticon-Predacon threat at bay." This G1-inspired Sideswipe toy converts from robot to sports car mode in 16 steps. Beast Wars II-inspired Maximal Skywarp toy converts from robot to bald eagle mode in 22 steps. This set costs $52.99, will ship in November 2021, and can be preordered from Amazon today.

We've hit the end, my toy-collecting friends, and we are going to wrap with not a toy, but the other kind of collectible. No, not Funko Pop!s. I'm talking about enamel pins! Power Rangers has arrived at Icon Heroes and they are starting off with enamel pins and desk accessories! As someone who owns a Power Rangers Mighty Morphin' Megazord letter opener and uses it every day, I am floored by the grandiose perfection that is Icon Heroes' Mighty Morphin' Power Rangers Dragon Dagger letter opener. It is so detailed and the paint on it is absolutely perfect.

Icon Heroes also makes things like cardholders and pin books, and right now they are touting a full collection of Mighty Morphin' Power Rangers enamel pin books. Each of the six main Rangers comes pinned to a card back with colors and logos reminiscent of the original '90s toys. Included with the ranger is their Zord. Go check out Icon Heroes and don't miss out on collecting these Morphenomenal pieces today!