A thundering herd of sentient robots in disguise is headed toward your world as IDW goes full retro for an all-new prequel to the original 1984 Transformers #1, honoring 35 years of Hasbro's Transformers universe — and SYFY WIRE has an exclusive preview set to storm its way back home.

This monumental Transformers '84 #0 reunites the inspired Transformers: Regeneration One team of Simon Furman and Guido Guidi, and their bold backstory is a tempting feast for any self-respecting fan of the billion-dollar sci-fi franchise.

Landing on Aug. 21, this high-octane, 36-page one-shot soon finds war strangling the planet of Cybertron. But an even deadlier threat looms: an asteroid belt powerful enough to demolish and obliterate the steel world unless heroic Autobot Field Commander Optimus Prime and his valiant robot recruits can clear a safe path for the home planet. But what other hidden motivations does Prime have for this covert mission, and exactly how does it connect to a little-known 11th-century event on Earth? 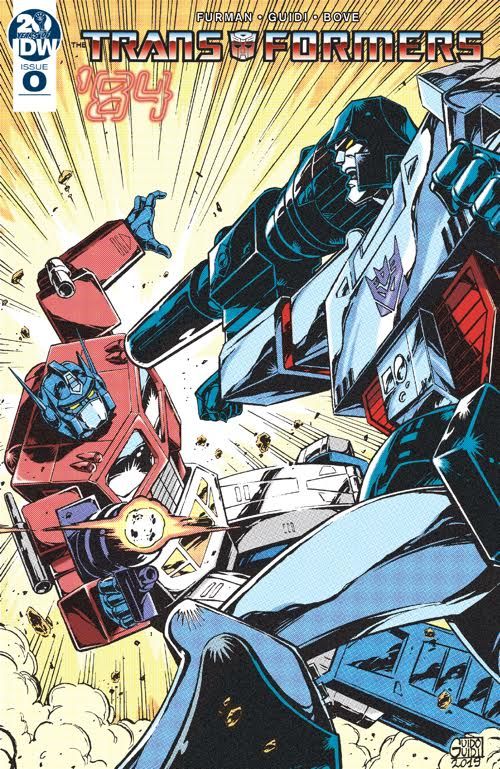 According to Transformers veteran Simon Furman, back in the olden days of Marvel U.K., the trick was to fuse U.S. and U.K. Transformers storylines into a seamless whole. Believing theirs to be the true canon, American readers actually only had their homegrown stories until a deadline crunch forced Marvel's U.S. editorial team to reprint the first-ever Transformers U.K. story, "Man of Iron." Now that tale is being trotted out to help form this 35th-anniversary prequel, and it was both a daunting and an exciting prospect.

"Daunting because, as we found with Regeneration One, some fans prefer their founding Transformers untrammeled by retroactive tinkering," Furman tells SYFY WIRE. "It’s almost treading on sacred ground. But exciting because that very first issue of Marvel’s Transformers covers such a big span of time in its opening few pages. Massive game-changing events happen in a single panel. There had to be stuff we didn’t see. Stuff we didn’t know."

Then Furman began thinking about the Marvel U.S./U.K. meld he used to do on the original run and wondered if he could somehow loop in the very first U.K.-originated story too. "Man of Iron" was showcased in the American comic (Issues #34–35), so that made it as much "in-continuity" for U.S. readers as well.

"Set in then present-day England, 'Man of Iron' references events in the 11th century," he explains. "How could that possibly gel with the launch of the Ark several million (Earth) years before? ‘Man of Iron’ involves the discovery of an alien space-going vessel buried under the remains of Stansham Castle and the semi-mythical tale of a Man of Iron emerging in the midst of a battle for that selfsame edifice and turning the tide of said battle. It was never really explained either who the Man of Iron was or how the vessel came to be there in the first place. Once again, I saw a narrative gap I could maybe exploit."

After an intro on Cybertron that is very U.S. Issue #1-centric, the scene shifts to the aforementioned Stansham Castle, currently under siege by Vikings.

"Our mysterious but handy (and pivotal) omniscient narrator sets up the story here," Furman adds. "What the hell does this have to do with a war millions of light-years away? Enter our spacegoing (Cybertronian) vessel, which crash-lands several miles from Stansham Castle. Right away that’s jarring if you know ‘Man of Iron,’ because the buried vessel and its crew are under Stansham Castle — not x number of miles away."

He adds: "We soon meet that two-‘bot crew — Cloudraker and Fastlane (who, most importantly, hadn’t featured in the Marvel run of comics), either of whom could be the Man of Iron of ‘myth.’ But why are they here? Was this a random crash-landing, or are they here for a purpose? We answer that pretty quickly. They’re searching … for the Ark. Aha, I hear you say, a link!"

Plow into our four-page peek at IDW's Transformers '84 #0 one-off in the gallery below, before the issue crash-lands into stores on Aug. 21.