If you're looking for movies from fresh voices, then look no further, thanks in part to the Welcome to the Blumhouse collection, which offers a slate of new horror and thriller genre movies on Amazon Prime, all of which have exciting new perspectives driving them. Evil Eye, Nocturne, and The Lie were all written by women, and the latter two were also directed by their respective writers. SYFY FANGRRLS had the chance to chat with Madhuri Shekar, Zu Quirke, and Veena Sud on bringing their unique voices and storytelling to each project and what it meant to see it come to life.

Madhuri Shekar's Evil Eye tells an authentic relationship on-screen while also serving as a reminder that representation behind the screen matters just as much. The story, about a mother who wants nothing more than to protect her daughter, offers a potent sense of relatability and familiarity to its characters, and it's clear from watching the film that everyone involved understood how important keeping the screenplay's energy was to creating something memorable. Shekar explained how critical it was to have people in the room who were fully on board with her creative work.

"As a first-time feature writer, I don't have a ton of power, but I do have the power to say no to the whole project. So, when we started, it was Amazon, Blumhouse, and Nina Anand from Purple Pebble Pictures. She really, really wanted Purple Pebble Pictures to do it. And I realized that having Amazon and Blumhouse was this incredible opportunity — that they would be on board — but I did not want to proceed unless Nina and her team and Priyanka Chopra's team would join in as well. I needed Indians. I needed South Asians on the production team. So that was a very, very important qualification for me to say yes.

"Then the other reason I said yes is that I spoke with the Amazon and the Blumhouse teams, and they just really got it. And I felt very comfortable with how much they believed in the story. When they found the Dassani brothers to direct this movie, they were just so perfect for it. So, yeah, having the right people in the production team was so important and I was very lucky. I couldn't, I wouldn't have [said yes] if this hadn't happened. I would have said no. And then this movie wouldn't have been made."

Veena Sud's The Lie is another example of how important it is that a creator's vision doesn't get lost on the cutting-room floor. The film's characters — an upper-middle-class white family — aren't redeemable, but they don't deserve to be. The daughter of the family unit commits a horrific crime that then leads to her parents leaning into their best worst selves to protect her and the lie they've orchestrated. It begs the question: How far would any parent be willing to go to protect their child? The beginning of the film opens with a montage of pictures and videos of a happy child and her adoring parents Rebecca and Jay, a moment that hits home later when both mother and father try to reconcile the past with who their daughter is now and the part they played in it. Sud spoke about what influences, be it personal or otherwise, went into her adaptation of the German film We Are Monsters.

"The biggest influence for me in terms of telling this story was my experience as a parent. That experience of all of a sudden, when you have a child, you become the citizen of this country that you will never not be a citizen of ever again, where you just love this person with a ferocity. That, I think, is kind of probably unparalleled in the human experience. I'm fascinated by that, fascinated by what I would do, were that to be my child. And also, in that moment that you talk about when they're discussing why she's gone, how did this child go from being happy to being so damaged and capable of murder? I think the thing that so many parents, this is the conundrum, right? Like I think it's all my fault. Like no matter what I know, and if I could not believe that, I think I'd be a much happier person, you know, but there's that saying, you know, I'm only as happy as my unhappiest child for a reason, that is our burden as parents."

"And maybe it's an imperative of the species that we take so much responsibility for the development of assuming being because if we didn't then maybe we wouldn't have survival success rates that we do. My logic brain knows that I grew up with parents and half of the stuff is my own stuff. It's not their stuff. And then my parent brain comes in and says, 'Where did I go wrong?' You know, over and over and over every day. And then I see other parents, and I want to be like, 'This is not true.' And then they're like, 'There's some blindness here. There's some blindness of love and something in us that makes us blind.' So that's the whole theme of the story, how blind we become because of these creatures."

All three have bits and pieces of their creators woven in them. Like Evil Eye and The Lie, writer and director Zu Quirke's Nocturne has the same intimate touches. 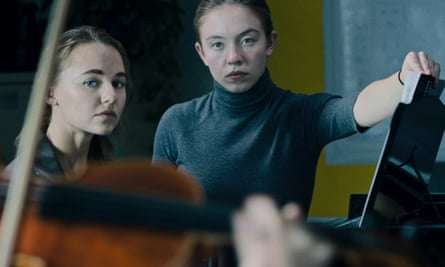 In it, a young woman, Juliet, has been living as an understudy to her twin sister, Vivian, in life. They both share a love for playing the piano; however, Vivan's achievements had been overshadowing any hopes and aspirations Juliet could have ever possessed. When a chance to excel past her sister presents itself, Juliet gives herself over to it, and of course, chaos ensues. Nocturne is a creepy, fun ride that was confident in everything it wanted to do. Even though this was Quirke's first feature-length movie, she'd been honing her skills for years, even before she knew she wanted to be a filmmaker.

"I think my first real drug was music. I started playing music. I learned by ear when I was four years old, so I was playing before I could write. It's almost a method of storytelling. I learned the Suzuki Method, this method where you learn by ear, and you don't learn to read music. You're learning it from someone kind of telling you the story as such, and then you play it back to them. When I was a little older, I got very into writing, which kind of stems from this."

"And when I reached my teens, I found myself shooting small short films all the time. Despite all of this and this kind of slow evolution towards directing and then filmmaking, I didn't really realize that that's what I wanted to do professionally until I was in my late teens. And then I started making [moves] towards that. I lived in Birmingham growing up, so I'd catch a train to central London on weekends at ungodly hours in order to take part in student films. But I didn't really start making shorts until my twenties. That was really the evolution. I started writing and directing film shots in my twenties. And from there, I just kind of organically grew into, potentially, a feasible career path."

Evil Eye, The Lie, and Nocturne are incredible examples of all the fresh and unique stories we can get from creators who would otherwise have their voices diluted in some way — and hopefully, programs like Welcome to the Blumhouse are only the beginning of unlocking all the potential of representation that can be told through horror filmmaking.

Portions of these interviews have been edited for clarity.

It's a fan thing
Join SYFY Insider to get access to exclusive videos and interviews, breaking news, sweepstakes, and more!
Sign Up for Free
All Posts About
Fangrrls
Movies
Blumhouse
ScreamGRRLS
Related Stories