Do you still celebrate an anniversary for a movie that won its lead actress a Razzie? The answer is yes, you absolutely do, especially when said lead actress is the legendary Halle Berry. This year marks the 15-year anniversary of the movie Catwoman. Now, I’m no stranger to slandering this fifth-cousin twice-removed of a DC character inspired movie, but today, I’m ready to talk about the change of heart I’ve had about it and about Berry's character, Patience Phillips.

Halle Berry tried to prepare us for her role in John Wick: Chapter 3 – Parabellum earlier this year with her performance in the 2017 movie Kidnap, playing a mother who stopped at nothing to rescue her child. Instead of being armed with guns and combat-trained dogs, she had an indestructible van and an askew wig. Berry drove like a pro, ran like a track and field star, and fought like a prized MMA fighter in the masterpiece that is Kidnap.

It was proof that Berry can own an action role when given an opportunity to do so, and why she’s so damn good in John Wick 3. It was downright refreshing to watch her kick ass alongside Keanu Reeves — not to mention cathartic to see a Black woman being such a cold-blooded killer on the screen, to be honest. Berry has always had the range and is eternally fun to watch when she plays an action heroine, but she can only do so much with what she’s given.

That brings us to why I’ve had a change of heart about Catwoman. Granted, it's still a bad movie, but looking back on it 15 years later, there are some real redeeming things going for it. The main one of them is Berry herself. As Patience Phillips, Berry gave us a socially awkward mousy artist who was struggling with her confidence until she died and came back to life renewed, thanks to CGI’d magical cat breath.

Patience becomes an actual Catwoman, but unlike the cat humans of our nightmares unleashed on us in the recent trailer for Cats, she’s less traumatizing as she leans into the idea of her character getting powerful catlike abilities. The script shouldn't have called for it but it did and Berry showed up, making her performance in Catwoman campy and, dare I say, lovable. The lines are putrid, but learning to appreciate Berry’s commitment to selling them is what has made them so endearing. The corny one-liners only increase as Patience gets more comfortable with her newfound abilities, and to put it frankly, they belong right next to the ones delivered by Arnold Schwarzenegger's Mr. Freeze in Batman & Robin.

This version of Catwoman allowed Berry to really give it a go with the action — much more involved than the stunts she performed when she played Storm in the X-Men movies. At one point, she uses a bad guy as an impromptu surfboard on dry linoleum floor after doing some serious parkour all around the jewelry store they were both trying to rob. She even posterizes Benjamin Bratt’s Detective Tom Lone during a slightly cringe-inducing game of sexy basketball in front of some elementary school kids.

This movie will always be full of “I can’t believe someone wrote that” gems, but I'm glad I can finally appreciate Catwoman for what it is instead of what I once wished it had been. Honestly, the perfectly ripped skin-tight leather suit with the diamond nail tips and the flirty pixie haircut should have been enough of a clue, to begin with. 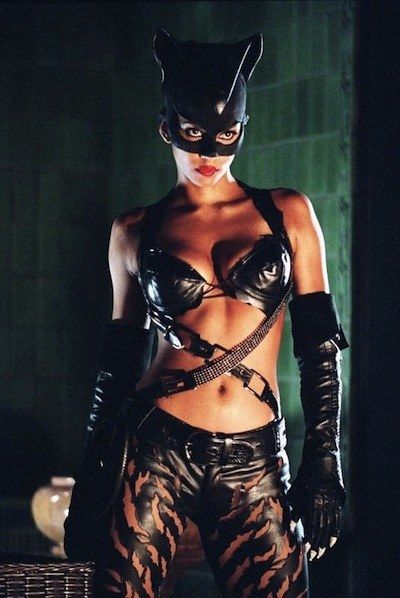 Because I enjoyed Berry so much in John Wick 3, it allowed me to find more value in what she did as Catwoman. In another universe in which the movie had been given a better script, I can't help but wonder what Berry could have done with such an iconic character, but she did the best she could with the story our unfortunate timeline provided her. I won’t be getting any “I love Catwoman (2004)” tattoos any time soon, but these days, I’m willing to shout just above a whisper now about how I don’t dislike it as much as I once did. That said, I’ll still be forever cringing at “White Russian, no ice, no vodka... hold the Kahlua" — even if Berry does reprise her role in John Wick 4.

It's a fan thing
Join SYFY Insider to get access to exclusive videos and interviews, breaking news, sweepstakes, and more!
Sign Up for Free
All Posts About
Fangrrls
Movies
Catwoman
Halle Berry
Related Stories

The greatest Catwoman of all time