Welcome to a special WIRE Buzz, which we're dubbing "Trailer Buzz," thanks to the abundance of new genre teasers hitting the Internet. In this roundup, you can feast your eyes and ears on brand-new content for Facebook Watch, Amazon, and Netflix! Lastly, we've got some development news about Disney picking up the movie rights to yet another from the writer of Jumanji.

First up is Human Discoveries, an animated comedy series about the start of humanity 10,000 years ago. Zac Efron (Extremely Wicked, Shockingly Evil and Vile) and Anna Kendrick (Trolls World Tour) lead the voice cast as Gary and Jane, two cave-people trying to figure out the dangerous world around them. One of the "discoveries" of the title involves "garbage juice," which is just wine, but they just don't have that word yet.

10,000 years ago was a lot like today, meet some friends trying to figure it out. Starring Zac Efron and Anna Kendrick, Human Discoveries premieres July 16th only on Facebook Watch.

In a new featurette for Amazon's The Boys, executive producers Seth Rogen and Evan Goldberg talk about how the series heavily subverts the superhero genre.

"[The show] takes place in a world where superheroes are egomaniacal, sociopathic, god-like people," Rogen says. "The show really explores what these people would be like if they had unlimited power."

Karl Urban, who plays Billy Butcher, also shows up to talk about how he and his group (aka The Boys) are tasked with bringing down corrupt heroes who abuse their powers. In particular, they're setting their sights on the Seven, an elite team of meta-humans most likely modeled after DC's Justice League.

And did we mention the featurette has a baby shooting lasers out of its eyes?!?!

Season 1 of The Boys debuts on Amazon Prime Friday, July 26. The series is based on the comic by Garth Ennis and Darick Robertson.

We now have the first trailer for the summer-themed third season of The Epic Tales of Captain Underpants on Netflix.

George Beard (Ramone Hamilton ) and Harold Hutchins (Jay Gragnani) are delighted to learn that they're attending the same camp, but also horrified that Mr. Krupp (Nat Faxon), their sadistic middle school principal, is the head counselor. Krupp is determined to keep the best friends apart, but all George and Harold need to do is snap their fingers and turn their principal into the happy-go-lucky Captain Underpants.

Remember that now as you watch the teaser below.

In some development news, Disney/Fox just landed the movie rights to The Mysteries of Harris Burdick, a book by Jumnaji author Chris Van Allsburg, Deadline confirms.

Meant to encourage creative writing in young people, Burdick tells the story of an enigmatic writer who submits wonderful drawings to a publisher with the promise of delivering the full stories behind them the very next day. However, when the allotted time comes around, Harris is nowhere to be found. As such, the reader is meant to come up with their own fanciful explanations for the illustrations. 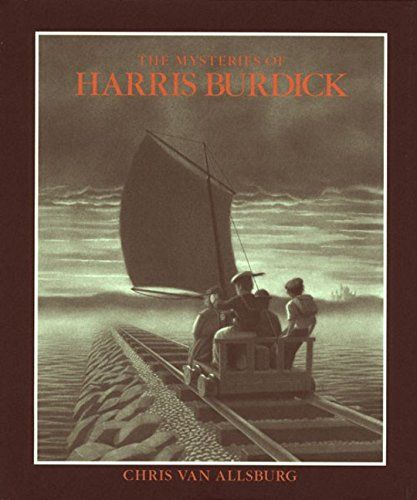 In addition to Burdick, Disney has also scooped up the rights to The Garden of Abdul Gasazi and The Sweetest Fig, both of which were also written by Van Allsburg. Gasazi tells the story of a garden that blurs the line between sinister fantasy and reality, while The Sweetest Fig deals with a magical fig that can bring one's dreams to life.

Van Allsburg's other well-known publications are Zathura and The Polar Express.