You haven't seen the last of the Secret Warriors!

At its "Animation Presents" panel at this year's WonderCon, Marvel revealed that three new Rising specials will be arriving later in the year. The titles for each are as follows: Battle of the Bands, Operation Shuri, and Playing With Fire.

Watch the trailer for all three below:

Battle of the Bands is bringing back Ghost-Spider (voiced by Dove Cameron). When mysterious attacks begin happening around town, Gwen and the New Warriors have to investigate, but can Gwen make her musical competition on time?!

Operation Shuri brings everyone's favorite Wakandan princess/tech genius to the forefront as she (voiced by Daisy Lightfoot) hangs with the Warriors in an effort to find out what it's like to be a normal teenager.

And finally, Playing With Fire finds Inferno (Tyler Posey) having his powers stolen by "a young and powerful villain." As such, it's up to the Warriors to help him, but he may not even want his abilities back. In addition, America Chavez (Cierra Ramirez) will gain a lesson in friendship from Ms. Marvel (Kathreen Khavari).

Attendees of the panel also caught the world premiere of Heart of Iron, the 44-minute Rising special that will premiere on Marvel HQ on Wednesday, April 3, at 7 p.m. EST.

The plot finds Riri Williams (voiced by Sofia Wylie) adjusting to college life and feeling like an outsider because she's so much younger than the other students. When her best friend is kidnapped by Hala the Accuser (she also destroys the engineering lab), Riri has to spring into action, using her personal idol, Iron Man, as inspiration for how to save the day.

You can check out the trailer and poster for that below: 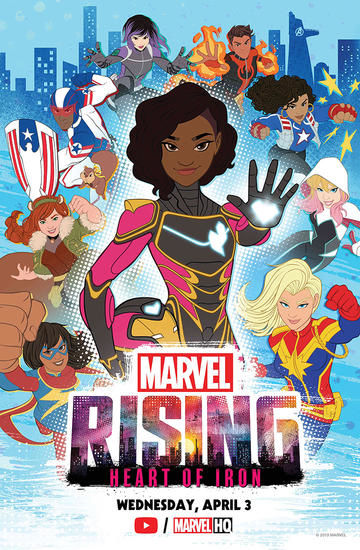 Marvel Rising personalities like Wylie, Khavari, Kamil McFadden, and more will be participating in a live chat during the special's premiere. You can access that right here.