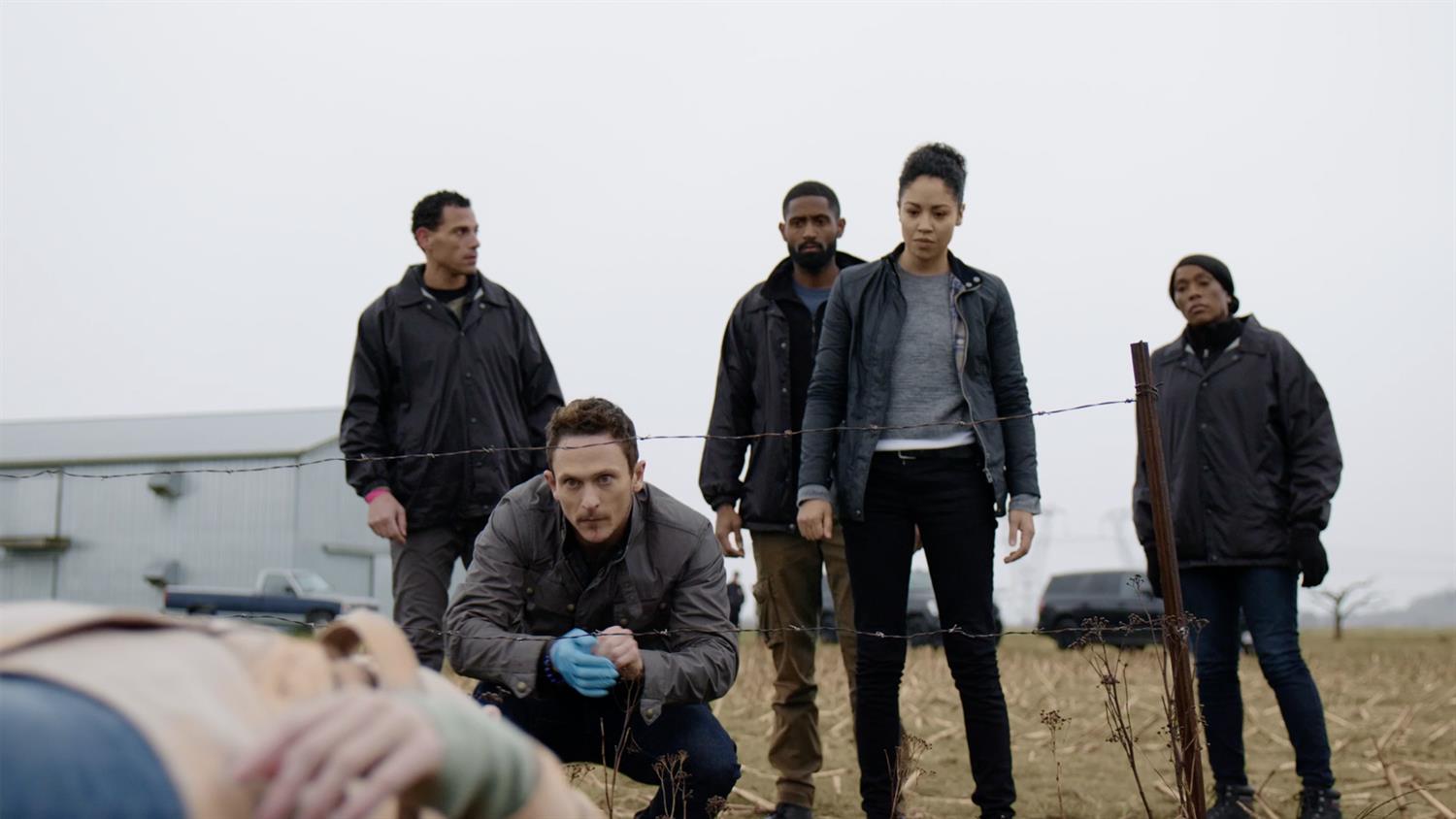 In the pilot episode of NBC's new sci-fi drama, Debris, the myriad of ways that humanity has guessed aliens might communicate with us turns out to be entirely wrong. The series, created by J.H. Wyman, the executive producer of Fringe, centers on the discovery of a derelict space ship that appears in our orbit and rains down parts on Earth — and those parts do not interact with our frail little carbon-based bodies so well. In just the first hour of the series, we see random parts of that orbiting ship take over human personalities, make bodies float, and project intense emotions unlike anything we've experienced before.

These strange occurrences certainly throw newly assigned Orbital Agents Finola Jones (Riann Steele) and Bryan Beneventi (Jonathan Tucker) for a loop as they investigate the impact of just a few of those pieces on the people in their closest radius. Plus, there's the revelation of the bigger secrets being kept from one another and how it will set up their working relationship going forward.

SYFY WIRE recently spoke with Steele and Tucker to ask them some very episode-specific questions about the Debris pilot and get some big teases about what's to come in Season 1.

***This interview contains spoilers for the first episode of Debris.***

Jonathan Tucker: Bryan is somebody who understands that feelings are important, but not as important as the bigger picture in terms of facts. He's willing to sacrifice one to save ten. But what he learns from Finola is that empathy and vulnerability are powerful, and are our tools to be used in that process of success. And that ultimately, in order to complete this overarching mission, he and Finola actually need to trust each other trust and the individual talents that they bring —which are somewhat opposing initially — but are the missing links that they both required.

Riann Steele: I would describe Finola as someone who is very passionate. She's very ambitious. She is full of empathy. She is connected to herself, her heart, and really to humankind and to the world. She understands that there is a reason that this is happening, and we just don't know it yet. And she's passionate in her drive to find the answers to that. I think in her relationship with Bryan, she fully knows that there is somebody here who is wearing a lot of armor, and hasn't quite worked out how to connect to himself. But she also has the sensibility to know that he has to do that in his own time. But ultimately, they're there for a mission and she's there with a bigger picture in mind, to continue her father's work. So it's also important that she isn't swayed so much by Bryan. It's important that they do work together and that they do learn to trust each other, which they slowly begin to do.

Productions almost never shoot a TV series in order of the script, so what was your first scene to shoot, and how helpful, or not, was it for getting you comfortable in the world of the show?

Steele: I remember the first couple of scenes we had to do, which were the real procedural scenes, which were the scenes where you just have to look at the debris. And I was thinking, "I don't know. I just feel a bit cheesy. I don't know what to do." I think there was one scene where we had to walk through this field. We had this chicken shed behind us and it was raining. The action was just "walk through the field and see a floating body." So, we're walking through the field, and because of rain, there's mud squelching. There's the smell of the chicken and I'm fiddling with the iPad, looking at the "thing" and looking at the debris. I remember just being really thrown by all of those things. And then having to trust it, and use all of it — use that aggravation and use the weather, and use the smell — and use it all. That became my way through. But I do remember that first moment just being like, "What is this? I hadn't expected this." [Laughs.]

How was it standing out in that empty field pretending to be following floating bodies?

Tucker: One of the things that the best shows I've worked on that have vibrant, voracious visual effects or special effects, is that they do a lot of it practically. So with the floating bodies, we had real bodies that are being pulled by cables on tracks, and it helps us visualize it. And then you have to have a lot of faith in the team that you have on board. You can ask questions like, "Does this look like I'm looking at the right place?" Or, "Should it be a bigger reaction?" And so, it's a combination of a really strong team that is able to do as much of it as possible practically and as well as to be able to guide the actors into what will be happening in the post-production process.

Steele: I was able to jump right in, as we do have some VFX, but we're doing a lot of it with actual people, as Jonathan was saying. We are seeing the bodies, and that really helps a lot for eyeline and allowing you to really experience it for real. But also, honestly, I just have the most vivid imagination. I just get lost so much in that. I enjoy any projects in which I have to pretend. I think in one project, I played a genie. I had to be painted blue and I just loved it. Any reason to be a child, I'm there.

Do you have a favorite moment from the first episode?

Tucker: I love when we were walking towards the planes at the end of the pilot. It's a two-shot walking out of the big hangar. It's a really quiet, simple beat between two people that I would like to spend more time with.

Steele: I know, that was my same little moment. It's a really good moment. It's just so simple. They're walking, and they're staring straight ahead. I didn't know how I was gonna react to Jonathan really until the day [we shot it]. It's like playing tennis. You can't really prepare for those moments. You just wait and see what someone gives you on set. And watching it back, it's so subtle, but it's so beautiful. They're both just being changed by each other, so very gently, and subtly. It just speaks so much. And I love that [J.H. Wyman] had written that in, and it's at the end of the episode.

By the end of the pilot, there are already some secrets these two are keeping from one another. Can we assume it's going to be a rocky road for these two?

Tucker: There's a scene [in a coming episode] where one of the Influx members does a thing that is shocking. It really reveals the dedication and the zealousness of the terrorist organization. And at that moment, it's so clear that if this group is willing to do this to succeed, we have to be able to trust each other. And in the process leading up to that scene, [Finola and Bryan] are starting to see that we both have skill sets that, when employed correctly, really work. As we're gleaning those from each other, and then reach this apex with that scene. I think it sets us off for our new trajectory in the second half of the first season.

What episode are you most excited for the audience to see post the pilot?

Steele: We're shooting [Episodes] 9 and 10 now. What the debris has us doing and the journey... I honestly feel like if the audience is with us this far, I think this is gonna be such a payoff. It's so exciting.

Check out SYFY WIRE's full interview with Steele and Tucker below, and watch new episodes of Debris on Mondays at 10 p.m. ET on NBC. 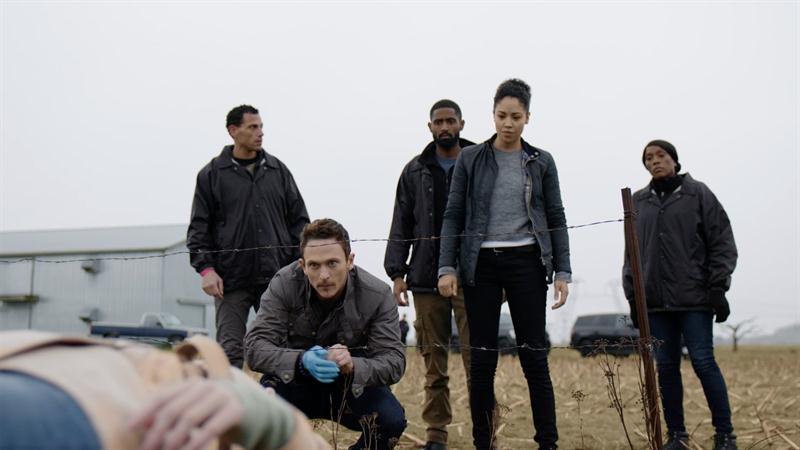