After 20 years, there's suddenly never been a better time to get into the cyberpunk world of The Matrix. Not only is the original 1999 film enjoying a brief theatrical re-release, but the recent news that a fourth Matrix film from Lana Wachowski is happening, and that Keanu Reeves and Carrie-Anne Moss are in it, is all enough to make you wonder if you're not living in simulation and that, really, it is still 1999.

When The Matrix hit theaters in 1999, it was an aesthetically groundbreaking feat, but that doesn't exactly mean the movie was a new science fiction concept. In fact, part of what makes The Matrix so enduring is that it's kind of a potpourri of all kinds of sci-fi. Famously, the Wachowskis required all cast members to read Jean Baudrillard's philosophy text Simulacra and Simulation so that they would get what the movie was all about.

But, other than philosophy and religion, what were the specific sci-fi stories that had a direct or indirect influence on the Wachowskis when they crafted The Matrix in the first place?

Here are 7 classic works of science fiction that helped to create the original program of The Matrix.

Written by James Cameron and directed by Kathryn Bigelow, the controversial Strange Days is probably the grittiest sci-fi film of the '90s. The film stars Ralph Fiennes as Lenny Nero, a guy who deals illegally downloaded memories and sells those memories on the black market. At the time, the movie wasn't critically well-received in the mainstream, but nearly all print sci-fi publications (like Starlog and Sci-Fi Universe) knew what was up. Because of its naturalistic approach to memory downloads and trippy questions about the nature of memory, it's pretty clear to see why the Wachowskis dug this film.

In numerous interviews, from 1999 to the present day, the Wachowskis have cited sci-fi anime as a huge influence on not only the look and feel of The Matrix, but also the essential cyberpunk plot devices.

In the 1988 anime film Akira (which was of course based on the famed manga), the world-changing telekinetic powers possessed by Tetsuo Shima are very similar to the way Neo can manipulate the Matrix itself. Not only that, but nearly every single chase sequence in all three Matrix films feel very similar to Akira.

Although the legendary 1995 anime may not have as many direct plot-analogs to The Matrix as Akira does, the idea of moving someone's consciousness via technology was depicted perhaps most epically and aesthetically memorable in the original Ghost in the Shell.

You could also argue that some of Trinity's battle moves are straight-up tributes to the Major.

The 1927 silent film Metropolis is often credited with creating serious science fiction cinema as we know it. Directed by Fritz Lang with a script written by his then-wife Thea von Harbou, the movie depicts a world in which a huge portion of a future city's population are slaves to an automated and oppressive lifestyle.

This notion is echoed in The Matrix when Neo realizes that human beings are being used as live "batteries" for machine intelligence. Metropolis is also about themes of revolution and how artificial intelligence could be used to destroy the working class.

Three years after he was in The Matrix Revolutions, Keanu Reeves starred in Richard Linklater's film adaptation of the Philip K. Dick novel A Scanner Darkly. In a sense, this is like the most famous person from The Matrix entering the origin of The Matrix itself.

Throughout many of Philip K. Dick's stories and novels, the idea that reality is not really reality is a major theme. It happens in the novels Ubik, Do Androids Dream of Electric Sheep?, Valis, and short stories such as "The Adjustment Team."

But, the shifting nature of identity that is central to A Scanner Darkly is perhaps the most like The Matrix in one specific way: in this story, the characters tend to have multiple identities and the question what — and who — is basically the entire plot.

Obviously, the slick cyberpunk aesthetic of The Matrix has almost nothing in common with the retro-cheesiness of Doctor Who, but the term "the Matrix" famously occurs in the Tom Barker-era serial "The Deadly Assassin."

In it, the Doctor has to do battle with the Master in a virtual realm called... yep... the Matrix!

Look, no, the Wachowskis did not rip-off old-school Who, but the concept is virtually the same. And yet, that kind of sci-fi recycling is arguably what The Matrix is all about. 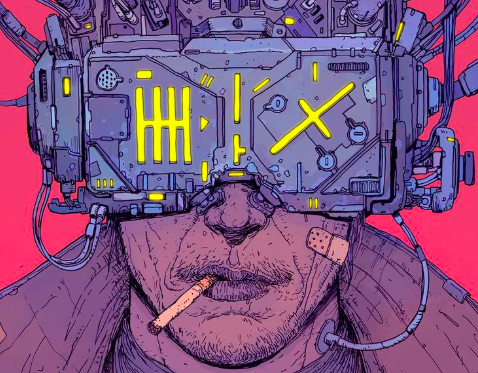 The biggest and perhaps most famous influence on The Matrix is William Gibson's genre-transforming 1984 novel Neuromancer. The story of the book centers on Case, a "cowboy" who jacks into cyberspace to perform all sorts of espionage, theft, and other cyberpunky-stuff.

Nearly the entire aesthetic of Neuromancer feels like the halfway point between Blade Runner and The Matrix. The Wachowskis even overtly tip their hat to Gibson with the human city called Zion. In Neuromancer, Zion is the name of an orbital city pivotal to the plot of the second half of the book. From this small detail to the overall way in which Gibson imagined characters interacting with a virtual and digital world, the parent and (perhaps grandparent) of The Matrix is certainly Neuromancer.

It's a fan thing
Join SYFY Insider to get access to exclusive videos and interviews, breaking news, sweepstakes, and more!
Sign Up for Free
All Posts About
Features
Movies
TV
The Matrix
lists
Related Stories

With The Matrix 4 coming, let's talk about how the first movie is a trans allegory

WTF Moments: The Zion rave madness in The Matrix Reloaded