The Arrowverse's Crisis on Infinite Earths will have long-lasting effects, just like every other DC 'Crisis'

On December 8, The CW began its most significant Arrowverse crossover to date with Crisis on Infinite Earths. Based on the legendary 1985 maxi-series by Marv Wolfman and George Perez, Crisis unfolds as the mysterious Monitor (LaMonica Garrett) brings together DC heroes past and present to risk everything against the Anti-Monitor and save the Multiverse.

This kind of mash-up wasn't exactly new to the DCTV world. Every year since Flash vs. Arrow in 2014, The CW's DC heroes come together to face a threat they couldn’t handle alone. From fighting an alien invasion to Nazi versions of themselves, the heroes always come out on top, then return to their regular shows and storylines as if nothing had happened.

It’s the one drawback to these massive crossover events. If you were to take out the crossover episodes from each show’s season and watch them straight through, you would still get a full story. You wouldn’t miss anything on Arrow, The Flash, Supergirl, Batwoman, or DC's Legends of Tomorrow. At times it feels as if these events take place outside of the regular continuity.

One word changed this perception: "Crisis." If you know your DC history, then you know when a series or storyline has the word “Crisis” in it, there will be long-lasting changes to DC’s status quo going forward. We say “long-lasting” and not “permanent” because comics, but you still get the drift.

In 2017's Crisis on Earth-X crossover event, the heroes of the Arrowverse finally felt an "aftermath" of their adventure once they returned to their respective shows. Barry married Iris and Oliver married Felicity. Martin Stein died a hero, and since he hasn’t had his "comic book resurrection" yet, we can assume it's sticking for a while. Crisis on Infinite Earths continued this trend.

The word "Crisis" has a long history within the DC Universe, reaching back nearly 50 years. Here is a short-list of some of the most iconic stories to feature the word.

The first meeting of the Justice Society and the Justice League. Before this, only Barry Allen could travel between Earths One and Two. This adventure changed the notion, and the teams would meet up more often moving forward.

Crisis on Earth-Three served as the introduction to the Crime Syndicate of America, the evil versions of the Justice League who would go on to become prominent antagonists for our heroes in the years to come. Owl Man would have the most significant effect, being the "spiritual inspiration" for the Court of Owls in Scott Snyder’s legendary Batman run.

The Justice League is all-hands-on-deck following the murder of Elongated Man's wife, Sue Dibny. While not an epic, world-spanning crossover, Identity Crisis revealed a dark secret about the Justice League, which questioned everyone's morality.

It's Earth vs. Apokolips when Darkseid finally finds the anti-life equation and places a multitude of heroes under his power. In the end, it's the Dark Knight who sacrifices himself to save the world. While not dead per se, Batman was thrust back in time, and while he was making his way through the ages, Dick Grayson took on the Batman mantle with Damian Wayne as his Robin.

THE ARROWVERSE "TRINITY" AND FATE 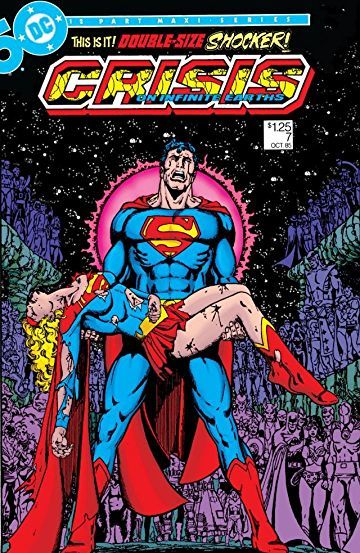 The Flash (Grant Gustin), Green Arrow (Stephen Amell), and Supergirl (Melissa Benoist) are the Arrowverse's version of the DC Trinity; they are the glue keeping everyone together. Fans who read the comic book series know these specific heroes meet tragic ends during the Crisis: Barry Allen gave his life to stop the anti-matter cannon, the Anti-Monitor killed Supergirl, and the Green Arrow (of Earth-2, but still the Green Arrow) died at the hands of a Shadow Demon.

Two of the three members of the Trinity met their comic book fates in The CW's version, but not in the way one would think. Barry Allen died stopping the anti-matter cannon, fading away into nothing. However, it was the Barry Allen (John Wesley Shipp) of Earth-90, not Earth-1. While tragic, this was also a beautiful moment that saw a hero perform the ultimate sacrifice and provided closure to a 30-year-old version of the character who deserved a fitting finale.

Then Oliver Queen died saving as many of Earth-38's inhabitants as he could before the anti-matter wave destroyed it. Unlike Barry, though, it was not an alternate universe Oliver but the Oliver Queen we've known since 2012. His death, which took place in part one, sent shockwaves across the DC fandom. In last year's Elseworlds crossover, The Monitor revealed Oliver would die during the Crisis, but no one expected it to happen so soon. It turns out his role was not over just yet, though. Taking the mantle of the Spectre from Jim Corrigan, Oliver helped restart the universe, sacrificing himself a second time.

Supergirl is still standing. As one of the surviving Paragons, she helps defeat the Anti-Monitor and bring forth Earth-Prime. Rather than sacrifice herself so the world can live on, she now stands as one of its greatest heroes, ready to lead it into the future.

FANS NEED TO BE READY

Crisis on Infinite Earths looks to be the biggest superhero event in television history, including the “Legends of the Superheroes” hosted by Adam West in the 1970s. Up until this point, fans expected and assumed specific patterns from these shows. Following Crisis' conclusion, though, with the creation of Earth-Prime and what can only be assumed to be the founding of the Justice League, these patterns will turn on their heads.

With DC, a “Crisis” means lasting change, so be prepared for a different Arrowverse in 2020.

All five parts of Crisis on Infinite Earths are now streaming on The CW app.

Here's how they pulled off that Ezra Miller Flash cameo in Crisis, and kept it a secret