Deadline reports that Wilson will play the mechanic/superhero Pat Dugan, who is the pilot of a 15-foot robot named Stripe that he himself invented. Wilson joins a cast that already includes Brec Bassinger in the title role, playing a high school student who "inherits the cosmic device of a long-gone superhero."

Geoff Johns will serve as showrunner, which is appropriate because he created the comic that the show is based on back in the 1990s. He sounds most pleased with this latest casting, too, saying, "When I first moved to Los Angeles in 1996 and saw Bottle Rocket, I became a huge fan and admirer of Luke’s, and I literally wrote this part for Luke, hoping that someday and somehow he’d play Pat Dugan. I only envisioned him."

Now that this is exactly what is happening, Johns likens it to winning the lottery and mentions Wilson's great talent, humor, and compassion.

According to Deadline, the show officially describes Pat Dugan as having once gone by the superhero name "Stripesy." He was a sidekick to the Star-Spangled Kid, who would later transition to become Starman of the Justice Society of America. It seems that Dugan ditched the sidekick life at some point, until Courtney Whitmore (Bassinger) discovers his past and takes on Starman's mantle herself. Dugan is already connected to Whitmore — she is his "new stepdaughter." With Courtney in need, Pat comes out of retirement and travels the sidekick road once more, but this time he does it in a giant robot.

There is no official release date yet for when Stargirl will be released on the DC Universe streaming service.

Former Doctor Who companion Karen Gillan (Amy Pond in Seasons 5-7) is on a roll — she's hit it big in the MCU (playing Nebula in both Guardians of the Galaxy films, Avengers: Infinity War, and the upcoming Avengers: Endgame), she stole every scene in Jumanji: Welcome to the Jungle (and will reprise her role in the sequel), and her debut as a writer/director (The Party's Just Beginning) has earned plenty of very positive attention. The hits are going to keep coming (literally), as she is now set to play a full-on assassin.

According to The Hollywood Reporter, Gillan has signed on to play the lead role in Gunpowder Milkshake, an action thriller directed by Aharon Keshales and Navot Papushado (Big Bad Wolves). They also co-wrote the script with Ehud Lavski. 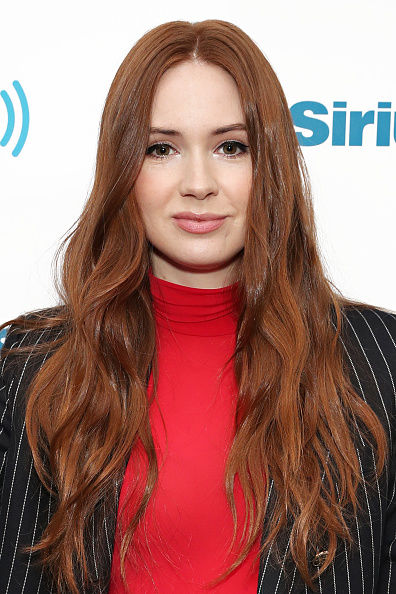 We don't have a lot to go on in terms of story details, other than that the film is definitely in the "assassin genre" and will tell a story that spans "multiple generations." THR goes on to report that the cast is "envisioned as being all female, with Gillan the cornerstone." The script is said to be "snappy and violent," taking cues from both Kill Bill and Edgar Wright's Baby Driver. We're already picturing Gillan taking a** and kicking names as a Jason Bourne-esque fighting force, and we're ready to buy tickets.

The current plan is for Gillan to shoot this film directly after filming the sequel to the Jumanji reboot — most likely this spring.