The Legend of Zelda: Majora’s Mask is a terrifying game. All I have to do is think of that dunDUN and my heart beats faster. Not because of love. But because of anxiety. The game was released in 2000 as a narrative follow-up to the critically and commercially successful Ocarina of Time. In it, Link had been returned to the form of a child before running off into the woods trying to find Navi (Hey! Listen!) and instead finding a Skull Kid waiting to curse him. He ends up in the alternate reality of Termina, and has three days to save the world before a horrifying Moon falls to the land decimating everything and everyone.

Throughout the game, Link gets a series of masks that give him the qualities he needs to achieve specific tasks — there’s the main quest masks, like the Goron mask which turns Link into a lil’ Goron, then there’s a bunch of side masks which you don’t need but do make for a more fulfilling version of game play, like the Bunny ears which allow Link to run really fast. Like a bunny. One other such mask is Kamaro’s.

In a game full of creepy imagery, Kamaro’s storyline really stands out. He’s a ghost who used to be a dancer who was never able to pass on his dance moves. All Link has to do is wear this mask: 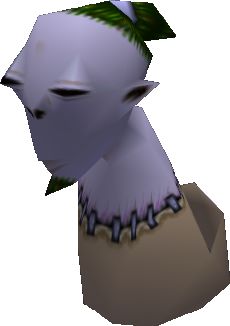 And share Kamaro's moves to create a new dance craze which is definitely not a way to hypnotize an entire population into complacency, no sir.

Sure, it does get you a piece of heart, but it’s still real weird.

P.S. I cannot remember what that little kid in the baseball hat is doing there, but it's fine. We're all fine. This is just The First Day. 72 Hours Remain.

It's a fan thing
Join SYFY Insider to get access to exclusive videos and interviews, breaking news, sweepstakes, and more!
Sign Up for Free
All Posts About
Fangrrls
Games
Chosen One of The Day
The Legend of Zelda
You May Also Like
Recommended by Zergnet
Latest on SYFY WIRE