In 1997, Square Enix released a little role-playing game into the world called Final Fantasy VII and many people were never the same again. You might think I’m exaggerating. I’m not. Just a month ago, after over two decades and years of hype, they released a remake of the same game and it beat the game-of-my-heart’s (aka Spider-Man PS4) previously held record of 3.3 million with a staggering 3.5 million downloads in the first three days.

But this isn’t actually about the game, or how incredible an experience it is, or that I spent 10 hours playing it yesterday. This is about the one and only angry boy at its center: Cloud Strife.

This is about his evolution. 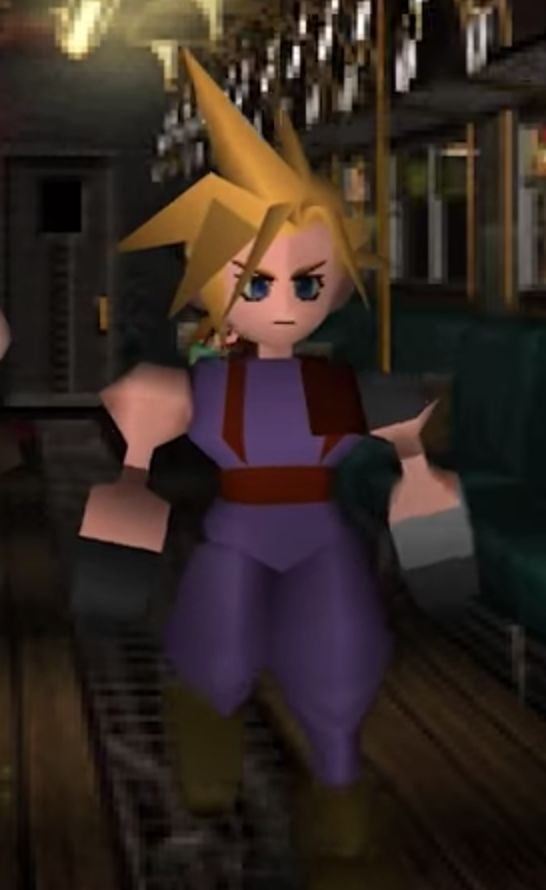 I vaguely remember this pointy boy made of rounded cubes who I met while watching my cousin play the original game on his PlayStation. His head! So circle! His hair! So Point! His arms! So brick!

In 2002’s Kingdom Hearts, Cloud showed up as a hired fighter for Hades so he could kill Hercules (that sentence has a whole lot going on for those of you who are unfamiliar with the Kingdom Hearts franchise, apologies). But let’s get into this update:

He’s still our pointy boy!! Only now he’s got texture. And a very cool cape. And more belts than you could possibly know what to do with. But hoo boy those mako eyes, and that liner? We’re starting to see how we could stare at his face for a pretty long time.

2005’s Advent Children is a g*dd*mned beautiful Final Fantasy movie that has all the magic of a film made entirely of cutscenes and batsh*t incredible fights. It’s perfect. Truly.

And Cloud! Our sweet, angry pointy boy is now a soft lit and dewy eyed man. His hair looks like you could put your hands in it.

And now here we are, 15 years later. Gaming graphics have come a long way (some might say they’ve become terrifyingly realistic), and the people finally got what they’ve been clamoring for for years: a Final Fantasy VII remake created with all the technology we now have access and… you know what? It was worth the wait.

LOOK AT THIS SOCIALLY DISTANT MAN WITH A HEART OF GOLD:

I mean maybe he’s born with it — he wasn’t, he’s a SOLDIER — but maybe it’s that Cloud’s sitting pretty on just the right side of the uncanny valley. Also, talk about some Luke-Skywalker-on-Dagobah-arms, what even. I have to say, if this is where we landed, it was worth the 23-year-wait.

Thank you, Square Enix, for making this happen. I can’t wait to see what Cloud gets up to in part two. (Although, a tip: give us a scene of him conditioning his hair, it will ground the series in reality.)

It's a fan thing
Join SYFY Insider to get access to exclusive videos and interviews, breaking news, sweepstakes, and more!
Sign Up for Free
All Posts About
Fangrrls
Games
Movies
Chosen One of The Day
Final Fantasy VII
You May Also Like
Recommended by Zergnet
Latest on SYFY WIRE