No, it was not a fever dream. The live-action show Teenage Mutant Ninja Turtles: The Next Mutation did indeed happen in 1998. That's when we were first introduced to the fifth mutant turtle, Venus. She, too, was exposed to the mutagen that turned the others into pizza-eating bipedal nightmares. Yes, Venus is a female turtle. If it wasn’t clear by her aqua blue accessories, her creators made sure to give her mammary glands. We're saying that Venus has turtle t*ts. 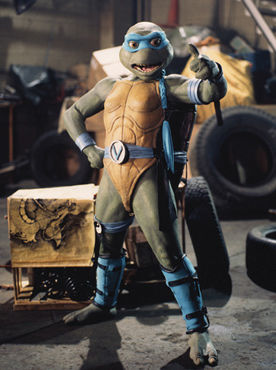 Venus somehow ends up all the way in China after being left to aimlessly drift in the sewers of New York City, which is more plausible than her needing a training bra. Somewhat similar to her male counterparts, Venus's name is art inspired, named after the famous statue Venus de Milo. Unfortunately, that wasn't enough to set her apart from the guys, so the creators had to throw some B-cups on her. To make it weirder, her turtle shell has the bumps for where her breasts are underneath. Does her shell grow with her breasts? Does Venus have nipples, and, if so, for what? Did the mutagen make them mammals? So many questions when all we really want to do is enjoy Venus as this kick-ass mutant turtle who uses ancient shamanistic magic and manipulates orbs to fight. All Leo and the guys have are weapons and high-kicks. Venus knows magic.

Venus’s introduction meant Leonardo, Donatello, Raphael, and Michelangelo were no longer brothers. The writers had to leave the possibility of potential romances open because the mutagen not only gave Venus breasts but apparently made the turtles follow heteronormative practices as well. Thankfully no little mutant turtle babies ever came of any of this.

It's a fan thing
Join SYFY Insider to get access to exclusive videos and interviews, breaking news, sweepstakes, and more!
Sign Up for Free
All Posts About
Fangrrls
TV
Chosen One of The Day
Teenage Mutant Ninja Turtles
Related Stories