Cartoons in the 1990s and early 2000s were able to get away with literal murder.

Whether it was Ren and Stimpy, Johnny Bravo, Cow and Chicken, Rocko's Modern Life, or Invader Zim, kids show of that era didn't talk down to young audiences. Instead, they pushed the envelope of what one might call "acceptable entertainment for developing minds." These shows were vulgar, suggestive, weird, abstract, jarring, visceral, and in many cases, very, very scary.

No show fits those adjectives better than Cartoon Network's Courage the Cowardly Dog, which celebrates its 20th anniversary this month. Created by John R. Dilworth (founder of Stretch Films), the animated series took place on a desolate farm in Nowhere, Kansas, where an elderly couple — Eustace and Muriel Bagge — and their eponymous panicky canine encountered all kinds of supernatural and science fiction threats, from talking bananas to murderous alien chickens.

Courage (voiced by Marty Grabstein) was usually the only character aware of the immense danger, which left it up to him to save the day with some help from his sassy desktop computer. And while he was often forced to put on a brave face and become the hero of each story, Courage was always terrified by his strange adversaries, which ranged from a mobster-inspired foot fungus to the fabled Sandman.

Inspired by Dilworth's love of horror/sci-fi classics such as The Exorcist, Jaws, Forbidden Planet, and Village of the Damned, Courage the Cowardly Dog had its fair share of frightening imagery — a lot of it coming from the jarring inclusion of a CGI or live-action entity in the familiar space of the two-dimensional show. Episodes such as "King Ramses' Curse" (2000) and "The House of Discontent" (2001) have remained beloved by fans because of how bizarre and unsettling they are.

In particular, "King Ramses' Curse" is, more often than not, considered to be one of the scariest (if not the scariest) episode of the entire series. The uncanny CG design for Ramses and his ominous intonation of "return the slab" (voiced by Dilworth, of course) have stuck with fans for all these years. The rise of meme culture has brought the episode back to the forefront of public consciousness, providing a sort of internet-based community for fans to come together and share their experiences of being emotionally scarred by this ghost story with Ancient Egyptian overtones.

"I had just returned from traveling through Egypt and sailing the Nile and absorbing that immense culture and mythology. I couldn't help but be affected by it, so I wanted my version of it or a version of it," Dilworth tells SYFY WIRE. "I asked my brother, [Jim P. Dilworth], who [was] a designer and fine artist — he's now with the Pharaohs somewhere in their golden boat — to design me a Ramses and he did. I loved his drawings so much, I didn't want to hand draw it, I wanted to do something else with it."

The idea to make Ramses a CGI creation came about when John saw a rap video in which the singer (a dancing dog wearing a ski cap and oversized shirt) was two-dimensional, even when he turned around.

"I thought, 'Oh, okay, well there it is. I'm gonna do that.' [So] we did that through CG and it worked — it was so weird and different, but cheap. We had to do it within a budget, so these accidents happen on their own and have their own imprint historically," Dilworth explains.

Despite the episode's popularity among a generation obsessed with meme-able oddities and nostalgia, Dilworth admits that it doesn't rank among his favorite episodes.

As for why he thinks "King Ramses' Curse" was so traumatizing (and therefore a topic of huge discussion to this day), Dilworth says it might be the voice. "I voiced my brother's design. Maybe it's that," he muses. "They don't expect to get that. That's the literal stuff we take from live-action horror films. That could be one of the reasons, plus the dialectic between the absurd music and what's going on and this very scary creature out of nowhere." 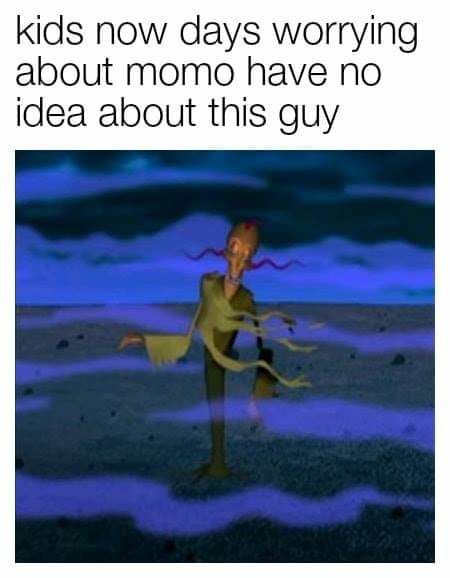 While it had no shortage of hair-raising visuals and malefactors, Courage was also notable for its depiction of three-dimensional villains with relatable backstories and motivations. For every antagonist that was scary for the sake of being scary (like King Ramses), there were two more who could strike an emotional chord with viewers. Just as the series could evoke terror and disgust, it could also evoke empathy and pity.

Whether it was a swamp monster looking for his lost love ("Bride of Swamp Monster") or a cruel man's shadow with a passion for show business ("The Shadow of Courage"), audience members could easily place themselves in the shoes of the person or creature the protagonists were supposed to be fighting.

Even the curmudgeonly husband Eustace, who basically abuses his wife and dog, is eventually made more sympathetic when we learn that his bitterness and cruelty are simply compensation for a loveless upbringing. It's still not an excuse to act the way he does, but it makes Eustace feel like a genuine human being, flaws and all.

"I don't portray psychopaths. That's a different monster altogether, and those don't interest me," the creator explains. "We are talking about the villain and I'm very much interested in the repressed traumas of villains, even of protagonists. I have stitched together a vague history for Eustace that he was unloved by his mother. She preferred an older brother and there was the effect of that in Eustace. I've explored that in a few cartoons. So, the idea of going deeper, trying to assign an etymology of bad behavior to childhood trauma is based on actual science. That's the science of psychiatry."

Just as he was upending our expectations of canines by making his main character an anxious dog, Dilworth was also subverting the audience's perception of bad guys. "Last of the Starmakers" (2002) proved that a cephalopod from outer space doesn't always have to be a madness-inducing terror from beyond the veil of human comprehension; "The Tower of Dr. Zalost" (2001) was a great case study in human depression; and "The Mask" (2002) explored heavy topics like domestic violence.

"I think the 'Last of the Starmakers' is so emotional," Dilworth says. "'The Tower of Dr. Zalost' will always be a kind of romantic and nostalgic cartoon for me. I wrote it in when I was living in Zagreb, Croatia... [The episode] is a reminder of my life in Croatia and that tower came from the tower that overlooks the city. And 'Zolost' is actually Croatian for sadness... And, of course, this psychological impulse that human beings have if we are unable to find happiness for ourselves, we're gonna take everybody with us, so that was it.

"'The Mask' is another one," he adds. "That had so many themes that I put in there. That one will always be kind of special, but not my favorite. Just special for their themes."

Of course, things never got too dark. In fact, Dilworth never expected audiences to react so viscerally to what he'd created.

"For me, it was absurd and I had no idea that audiences would be so affected," he says. "[The network's] comments were basically around no gore, which I'm not a fan of, and I've never been. In fact, I can't even watch gory movies. If I want to see blood, I just look at my own wounds. So, there was no pushback. In fact, we were blessed... These executives understood the cartoon language, the culture, and didn't treat it as a corporate thing. They understood the art of it and having filmmakers like myself."

The "No Gore" rule extended to Eustace's preferred method for scaring Courage. His original double-barrel shotgun had to be changed to an over-the-top mask once Cartoon Network was bankrolling the project.

Thanks to these elements, Courage is still fondly remembered two decades later by those who grew up watching it. The imagery, memorable characters, and quotable catchphrases ("The things I do for love!" and "Stupid dog! You made me look bad!") are indelibly branded into the hippocampus of millennials and their parents alike. And since we now live in an age of rampant reboots, remakes, and revivals, could there possibly be more Courage the Cowardly Dog waiting for fans just down the road?

In 2014, a CGI short entitled "The Fog of Courage" aired on Cartoon Network in Southeast Asia, but never led to anything. Last fall, it was reported that Cartoon Network was developing a Courage prequel series for Boomerang, but Dilworth doesn't think fans should start defining the project just yet.

"We don't know what that is. We're in development with Cartoon Network, we've very excited by it, we'll wait and see what happens. We just don't know... We're not even sure it's a prequel," he teases. "[I'm happy to go] wherever the network wants to take it. I am simply the instrument of their ambitions."

Whatever we end up getting, you can pass the time by watching Dilworth's latest project, Goose in High Heels.

It's a fan thing
Join SYFY Insider to get access to exclusive videos and interviews, breaking news, sweepstakes, and more!
Sign Up for Free
All Posts About
Features
TV
Cartoon Network
Courage the Cowardly Dog
Horror
Interviews
animation
cartoons
You May Also Like
Recommended by Zergnet
Latest on SYFY WIRE

Peacock's 'In the Know' stop-motion series has been cast

Actors on 'The Ark' were like 'kids in a candy shop'