Eminem marshals some punishing words for Netflix over Punisher cancellation

On Monday, Netflix revealed that it was canceling The Punisher and Jessica Jones, thus completing its purge of all the Marvel Television shows. Obviously, fans weren't happy about the news; in fact, it was enough to gain the attention of rapper Eminem.

"DEAR @NETFLIX," he wrote in an all-caps Twitter post yesterday. "REGARDING YOUR CANCELLATION OF THE PUNISHER, YOU ARE BLOWING IT!! SINCERELY, MARSHALL."

REGARDING YOUR CANCELLATION OF THE PUNISHER, YOU ARE BLOWING IT!!

The wording of the tweet, particularly "BLOWING IT," is curious and may be a reference to one of Eminem's most famous songs, "Lose Yourself." As the chorus goes:

You better lose yourself in the music, the moment
You own it, you better never let it go
You only get one shot, do not miss your chance to blow
This opportunity comes once in a lifetime you better

Marshall Mathers may have a particular soft spot for Frank Castle because the rapper actually teamed up with the Marvel antihero in a 2009 comic by Fred Van Lente and Salvador Larroca. 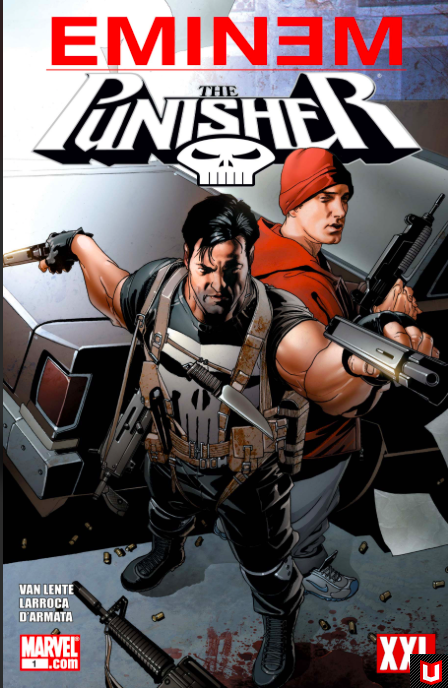 Since both of these shows received the axe after Iron Fist, Luke Cage, and Daredevil, many suspect that Disney is clearing the way for its own streaming service, Disney+. The House of Mouse can't touch the Marvel series until two years after they are no longer on Netflix (per a previously established contract), so getting them out of the way now means they'll be available sooner down the road.

Eminem recently got into the comic book game when he recorded an original song for Sony's live-action Venom movie, starring Tom Hardy as Eddie Brock. Since a sequel is already in the works (despite so-so reviews), maybe the rapper will return to give us another rap track about the gooey Symbiote.

The Punisher, the real one, directly tells cops he's sick of them idolizing him