The ability to access one's PlayStation 4 has finally become available for iOS devices, iPhones and iPads, Engadget reports. Apple users have been clamoring for this capability ever since Sony launched it on Android devices four-and-a-half years ago.

Through "Remote Play," users can sync their phone or tablet with their PlayStation 4 console and play any game they wish. The listing for the Remote Play app on iTunes compares it to another popular gaming console, reading:

"Take the awesome power of your Sony PlayStation 4 console, and give it the portability and convenience of the Nintendo Switch. Stream your PS4 games to your iPhone, iPad or iPod touch and play from anywhere. Never again will your gaming be interrupted when someone else needs to use the TV!"

Per the report, gaming on your phone is a lot better when you have an actual controller in your hands; Remote Play only gives you overlays on the screen. Sadly, a Sony DualShock cannot be hooked up to a device unless the device in question is jailbroken. That is why it is encouraged that one look to third party controller selections.

A controversial video game entitled "Rape Day" will not be allowed to be listed on Steam, according to a post on the platform's official blog. The statement is as follows:

Much of our policy around what we distribute is, and must be, reactionary — we simply have to wait and see what comes to us via Steam Direct. We then have to make a judgement call about any risk it puts to Valve, our developer partners, or our customers. After significant fact-finding and discussion, we think 'Rape Day' poses unknown costs and risks and therefore won't be on Steam.

We respect developers’ desire to express themselves, and the purpose of Steam is to help developers find an audience, but this developer has chosen content matter and a way of representing it that makes it very difficult for us to help them do that.

IGN writes that the game (developed by Desk Lamp) allows players to verbally abuse, rape, and murder women, A Change.org petition offers further background, describing the title as taking place during the zombie apocalypse. The petition, which gained nearly 8,000 supporters, was able to achieve its ends in getting Rape Day banned from Steam.

Nintendo is launching its Labo: VR Kit, "which combines the innovative physical and digital gameplay of Nintendo Labo with basic VR technology to create a simple and shareable virtual reality experience for kids and families," according to the press release.

The fourth release in the Nintendo Labo series of products, this upcoming kit provides the buyer with even more cardboard tools to build six new viewfinders (called "Toy-Cons") with which to enjoy the Nintendo Switch. 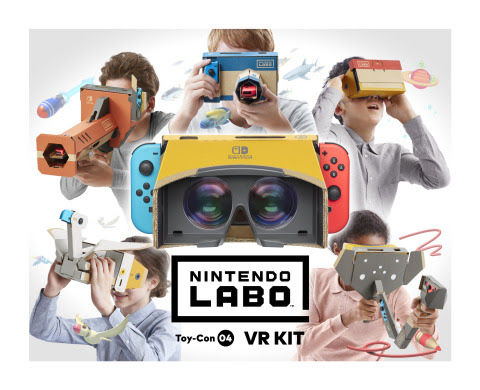 “This new kit builds on the core tenets of Nintendo Labo – Make, Play and Discover – to introduce virtual reality in a way that’s fun and approachable for both kids and kids at heart,” said Doug Bowser, Nintendo of America’s Senior Vice President of Sales and Marketing in the release. “We wanted to design an experience that encourages both virtual and real-world interactions among players through passing around Toy-Con creations.”

The Ninteod Labo: VR Kit launches everywhere April 12. Even then, there are different prices ranges, allowing one to spend between $19.99 and $79.99.