Gardner Fox, co-creator of The Flash, Hawkman, and the Earth-2 concept, belongs on Comics' Mount Rushmore

I love reading about comics history and learning about the people who laid the bricks for the industry. These pioneers came from different worlds, and their disparate backgrounds enhanced the stories they created.

Gardner Fox was cut from a different cloth than many of his fellow comics trailblazers. Unlike icons such as Will Eisner, Jack Kirby, Stan Lee, Joe Schuster, and Jerry Siegel, Fox did not grow up poor. He came from an affluent Long Island family. He had a law degree from St. John's University. While others worked on the four-color books as a necessity to pay bills, Fox actually made the choice to quit his legal practice to do comics full-time.

Thank goodness he did.

May 20th marks what would have been Gardner Fox's 109th birthday (he died in 1986). Here we are, 34 years since his passing, and I keep wondering why this man is not revered and held in higher regard by fandom. Sure, we've had some nice shout-outs on The Flash TV series and in other media, but this guy is hands-down one of the most important people in the history of DC Comics, and there's a strong argument to be made that he belongs on comics' Mount Rushmore. So why isn't there a Gardner Fox Award? Why don't we talk about him more?

Fox wrote about 1,500 comic stories for DC, second only to Robert Kanigher in terms of all-time story count for the company (he wrote more than 4,000 stories overall). While best known for his comics writing, Fox churned out a dizzying amount of work in genres like science fiction, fantasy, westerns, and even sports. There was literally nothing Fox couldn't write, and he did so under a host of pseudonyms.

He was there at the launch of the comic book superhero era, having written a Pep Morgan backup story in Action Comics #1. He also wrote a strip about a crime-fighting attorney named Steve Malone that appeared in early issues of Detective Comics. In those days writing credits were rare, and because he used different names for different projects, Fox didn't fight for published credit; the paychecks were enough. But comics historians know Fox helped Bob Kane and Bill Finger create key early Batman stories, such as in Detective Comics #29, the first appearance of Doctor Death and also the first time Bats used his utility belt.

His biggest contributions included the creation of the Flash and Hawkman (with artists Harry Lampert and Dennis Neville) in the same legendary issue, 1940's Flash Comics #1.

He also co-created the original Sandman and Doctor Fate. Like Hawkman, Dr. Fate's origin was heavily informed by Fox's interest in Egyptian mythology, as well as his passion for the works of H.P. Lovecraft. That was part of Fox's secret sauce. Even though comics in the Golden Age were strictly "kids' stuff," it didn't stop the writer from injecting historical and literary asides that elevated the material, such as a reference to Shakespeare in the middle of a Flash adventure or scientific theories when he was writing Adam Strange in Mystery in Space. In Forgotten All-Star: A Biography of Gardner Fox, author Jennifer DeRoss wrote that archaeologists Carter Hall and Kent Nelson and college student Jay Garrick, all educated men with an overriding sense of justice, were reflections of the kind of person Fox was. 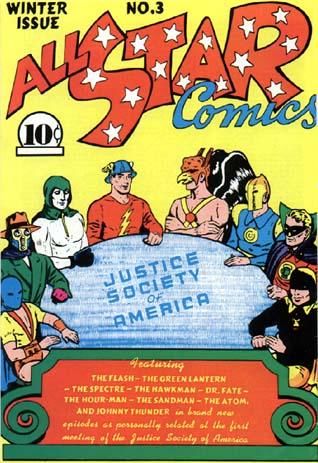 Perhaps his most impactful work was in the creation of comics' first super-team, the Justice Society of America, in All-Star Comics #3 (1940). The team-up of some of the Golden Age's most well-known heroes became a blueprint that future creators would follow for countless adventures. Fox himself would do so two decades later, writing the first adventure of the Justice League of America, one of the seminal events of the Silver Age. With the help of editor Julius Schwartz, Fox helped engineer DC's multiverse, first with the "Flash of Two Worlds" story, then with the initial JSA-JLA crossover in Justice League of America #21-22. Introducing the Earth-Two concept changed the course of DC Comics. The parallel worlds would become a dominant element in the company's mythos, to the point that it became so complex they had to blow it up in Crisis on Infinite Earths. But it all began with Fox.

Think about this: Fox not only helped build the DC Universe in the Golden Age, he was there decades later to help revamp and modernize it during the Silver Age. He was the writer who introduced Barbara Gordon as Batgirl. He co-created Zatanna and established her as the daughter of Zatara the Master Magician, a character Fox wrote early in his career. His longevity and relevance were remarkable.

Fox's career at DC would end abruptly in 1968, when he and other "old guard" writers such as John Broome and Otto Binder were shown the door for demanding health benefits. He would continue to write, of course, because that's what Gardner Fox did. He wrote for Marvel and other publishers, and more novels, including his Kothar and Kyrik fantasy book series. DC extended an olive branch to Fox with his spotlight in the 1985 Fifty Who Made DC Great one-shot. The one-page synopsis on the writer, a ridiculously too-brief summation of his contributions to the DC canon, includes Fox's recollection of coming up with the concept of Hawkman under a looming deadline. Read the first paragraph in the image below and see all it took to spark an idea that would help Fox create an all-time classic character.

For years, Fox didn't get published credit for much of his work for DC. He didn't seem to mind, given that he used various pseudonyms for his writings. Reading old interviews he gave, one gets the impression he wasn't much of a self-promoter or eager to build his own legacy. Perhaps that's one reason why he seems to be overlooked today ... but that shouldn't be the case. His impact at DC Comics remains as viable as ever today, more than 50 years since his last work for the company. Looking at the body of work he left behind, the staggering quantity and enduring quality, it is inarguable that Gardner Fox was a giant in the world of comics. He should be celebrated as such.

What's your favorite Gardner Fox story? Hit me up on Twitter/Facebook/Instagram and let me know. I'd love to hear from you.