Guillermo del Toro's Pinocchio 'as far as you can get' from Disney version, says one of film's writers

Guillermo del Toro has proven time and again that he'll always take the road less traveled when it comes to his movies. The Academy finally wised up to that fact that he's one of the most unique filmmakers working in Hollywood today and awarded him the Best Director Oscar in 2018 for The Shape of Water. Using his newfound influence, del Toro was finally able to realize a project he's had in the works for the last decade: a stop-motion take on Carlo Collodi's tales of Pinocchio.

After years of wallowing in development hell, the project — which del Toro is co-directing alongside Mark Gustafson (Fantastic Mr. Fox) — landed at Netflix in the fall of 2018. And while Disney is working on a live-action remake of 1940's Pinocchio with Robert Zemeckis at the helm, the streaming giant doesn't need to worry about any competition, because, as always, del Toro is going in a wildly unexpected direction. Recently speaking with SYFY WIRE, one of the film's screenwriters, Matthew Robbins, said that the movie is "as far as you can get from the Disney-fied" version.

Now, we should mention that Robbins hasn't had involvement with the stop-motion Pinocchio for quite some time. According to him, the script was first coming together when del Toro was down in New Zealand, prepping his Hobbit adaptation that never came to be (Peter Jackson ended up returning to the franchise). That was around 2010.

"I can say that movie was born by a very particular Guillermo take on the Collodi stories, which is not simply wishing to reprise the frequently dark pessimistic view of human nature. Not just that. There is a political aspect to it. As you’ve read, we’ve set the story in a kind of proto-fascist Italy," Robbins explained.

Similar to Pan's Labyrinth, Netflix's Pinocchio will explore the topic of fascism through the oculus of genre. The film, which is also a musical, takes place in 1930s Italy when an authoritarian government was on the rise, courtesy of Benito Mussolini.

"The impulse behind it comes from a particular view that Guillermo has of what Pinocchio is and the anarchy and chaos and how Guillermo thrills at the idea of the freedom that goes too far into chaos. He’s very drawn into that. There is a celebration of that in our screenplay," Robbins said.

In the years since the first draft was completed, del Toro decided to inject a musical element into the story, and Patrick McHale (Over the Garden Wall) was tapped to help the director rewrite the existing script. While the narrative is sure to have changed over the last decade, Robbins is confident that the original essence is still present. "I have not seen the new draft, but I am pretty sure that a lot of the elements that were exciting to him back when we did our original draft are still very much behind this. I know him so well. I’m very excited and very keen to see what comes about," he said.

The writer went on to say that del Toro's vision for the project skews "closer to the original material" and adopts a particularly dark tone, which is one of several reasons why it took so long to find a studio willing to finance it. In December 2018, del Toro himself admitted that his interpretation was taking inspiration from Frankenstein and would not be very family-friendly.

"[It's] Guillermo’s particular vision of what Pinocchio represents in a fallen world; that is just not there in the Disney version," Robbins explained. "It’s not depressing, it’s sort of a celebration of the anarchy of this kid. You know enough about Pinocchio to know that he does everything: He spends the money, gets fooled, runs off with the circus, he makes mistakes. Wherever he goes, he leaves chaos in his wake and he sails on."

He continued: "Del Toro is, if you’ve read his interviews, he’s just crazy in love with that anti-fascist [philosophy]. You saw The Devil’s Backbone with the kids in the orphanage and the rebellion against authority and the celebration of chaos, madness, and breaking the rules. That’s the engine behind this, which is why I think people were afraid to [finance it]."

Another reason was the budget. Back in 2010, the film's budget was estimated at $40 million, a figure that's sure to be even higher in 2020 when you consider inflation. "People would say, ‘Oh, this is so fascinating, so interesting, and so different. But is there any way you can bring that budget down? Can you get it down to under $20 million?’ There was just no way," Robbins said.

The writer and del Toro briefly considered doing Pinocchio in 2D with French artist Joann Sfar, but del Toro ultimately decided that he wouldn't budge on the costly and labor/time-intensive stop-motion element.

"I thought, ‘We might be able to [pull it off]’, but Guillermo said, ‘No! No! No! No! It’s gotta be stop-motion!’ So it never went very far, but I thought, ‘Come on!’ Years were going by. ‘We’ve got a real powerful statement here. We’ve got a fantastic [designer] and the design of these characters ... they’re such extreme personalities. I got excited for 30 seconds, but Guillermo stuck to his guns and lo and behold, it’s happening," Robbins added.

The designs in the movie will be based on the work of Gris Grimly, who did an illustrated edition of the original Pinocchio stories in 2003. "Gris Grimly is fantastic, [he's] part of the excitement of this movie, to take these designs," Robbins said. "They built three-dimensional models of Geppetto and Pinocchio and Pinocchio’s got that long nose with some leaves sprouting off of it ... and he’s wrapped up in bandages where he’s come apart. It’s a fabulous, fabulous design." 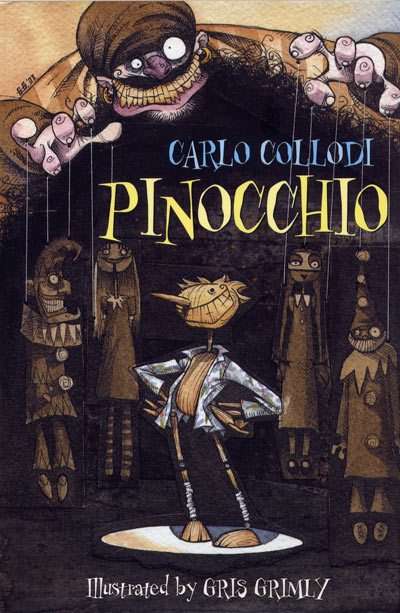 Robbins, whose screenwriting career dates back to the 1970s, has written several features with del Toro, including Mimic, Don't Be Afraid of the Dark, and Crimson Peak. Netflix has yet to set a premiere date for the film, which stars newcomer Gregory Mann as the titular puppet that dreams of being a real boy. David Bradley (Game of Thrones) and Ewan McGregor (Star Wars) will lend their pipes to the characters of Gepetto and Jiminy Cricket respectively.