Though most recent conversation around The New Mutants has revolved around the beyond-hectic release schedule of the film, the comics are a different story. Since its series debut in 1983, The New Mutants has been one of the most consistently heartfelt X-Men spin-offs. Though all of the New Mutants have been through changes, and the series hasn't always been in print, Dawn of X has brought the original core team back together.

One of the founding members of the New Mutants seldom gets room to shine: Xi'an Coy Manh, otherwise known as Karma. Apparently absent from the film cast and rarely brought up in discussions around the team, Karma has always been a character on the outskirts.

Though nearly all X-Men have shockingly tragic backstories, Karma's stands out for its sheer brutality. Born the daughter of a soldier in Vietnam, she saw her father struggle to free himself of his criminal extended family only to die young during active duty. She and her mother were attacked and raped while fleeing their home and her mother died, leaving Xi'an in charge of the welfare of her younger siblings, Leong and Nga.

Even in the beginning, this responsibility weighed on Xi'an, and she took it very seriously. Her "evil twin" Tran was raised by their crime lord uncle, General Nguyen Ngoc Coy, and they kidnapped Leong and Nga, which put Karma accidentally at odds with the Fantastic Four when she attempted to save them. The Fantastic Four helped put Karma in touch with Xavier, who promised to help her with her powers. Karma is a bit older than the other New Mutants and steps into a leadership role right away. In an early fight, she appears to be killed but is actually possessed by the Shadow King. 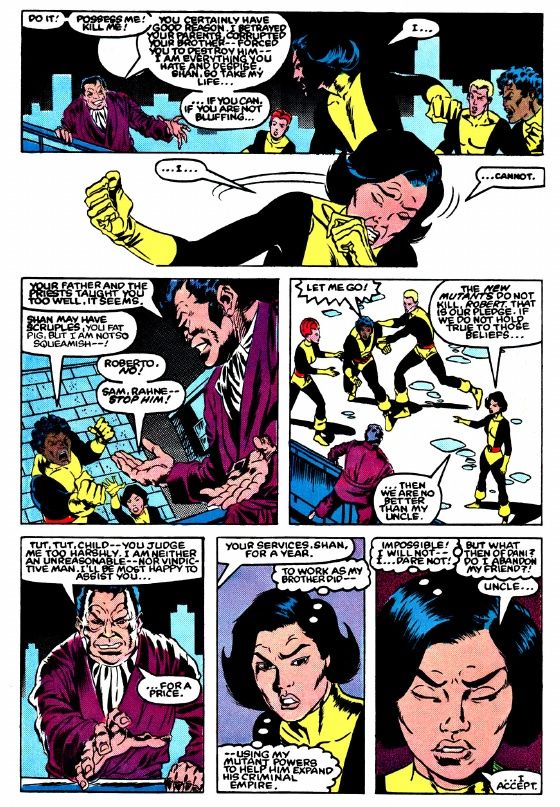 In this form, she gains a lot of weight and becomes a bit of a caricatured villain, but the New Mutants help her free herself. She rapidly loses the weight while on Asgard. Obviously the equation with weight gain as evil and weight loss as good is one of those storytelling moments we just have to question, but at least it's hardly ever brought up again.

However, her redemption is to almost no effect — she is barely featured in the book and quickly leaves the team. Leong and Nga go missing and she agrees to work for General Coy again in exchange for his help in finding them. Having just escaped from the control of an evil male figure, it seems like a fairly baffling choice, but it also shows us how seriously Karma takes her responsibility over her siblings. Ultimately, she enlists the help of Cannonball and Beast to find and return them to safety. 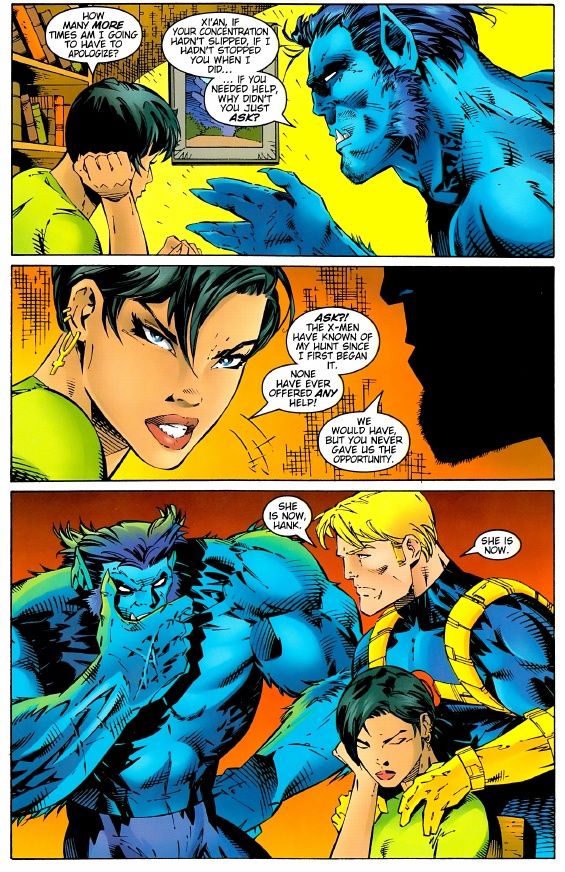 Though Karma spends years off the radar after that, her appearances are standouts. She appears in X-Force when the team accidentally run into her at Burning Man. She has pink hair and is hanging out with queer people. She shows up again later in the Mekanix series and shares a compelling flirtation with Kitty Pryde that never gets mentioned again. She's established as canonically queer in New Mutants #4 (2003).

Karma spends a lot of time at Xavier's as a teacher and mentor, appearing in more conservative clothing and showing the prudent side of her personality. She loses a leg in a fight against Cameron Hodge, but Madison Jeffries designs a prosthetic for her. She discovers the existence of a half-sister, Susan Hatchi, a weapons manufacturer who was abandoned by their father. No longer portrayed at all nobly, he ends up shooting Susan, leaving Karma in control of her corporation. Her brother Tran, long believed dead, is revealed to have become a malicious psychic entity. Currently, Karma is in the New Mutants book once more, living alongside her friends in Krakoa, but there has been very little presence on-panel.

You might have noticed all these stories follow a theme — her powers are all about control, but there is a lack of autonomy for Karma in her own life. So, what do we know about her character? She's a private person who underwent a lot of trauma in her youth. While many other X-Men rely on team dynamics to work through their angst, Karma tends to detach and self-isolate. She doesn't ask for help when she needs it and it sometimes blows up in her face. She takes matters of honor and responsibility incredibly seriously and blames herself when things go badly, even when it's not her fault. She passionately believes in working toward a better future so no one else has to go through the things she did. She has connections to communities outside of the X-Men and seems to lead a well-rounded, if mysterious, life.

Karma is one of those characters that would benefit so much from a more dynamic role. The new New Mutants series is great, but Karma has not yet been a focal point of any part of the story, even in passing. As a queer, disabled, Vietnamese woman and a founding member of the team, Karma's consistent treatment as an afterthought isn't great. What's more, she's a hugely compelling, mostly underdeveloped character who just deserves more time on the panel after all these years.

Wherever she goes from here, the New Mutants' story is always better with her in it.

It's a fan thing
Join SYFY Insider to get access to exclusive videos and interviews, breaking news, sweepstakes, and more!
Sign Up for Free
All Posts About
Comics
Fangrrls
The New Mutants
X-Men
Related Stories

Marvel keeps erasing Sunspot's Afro-Brazilian identity, and the X-Men (and fans) are worse off for it