When I first came out as a trans woman nearly a decade ago, there were very few autobiographical experiences of gender transition available online to draw from. Sure, there were clinical articles about the symptoms of gender dysphoria, and there were forums full of dryly shared personal accounts, but in terms of narrative experiences about what being trans felt like, there was not much available. 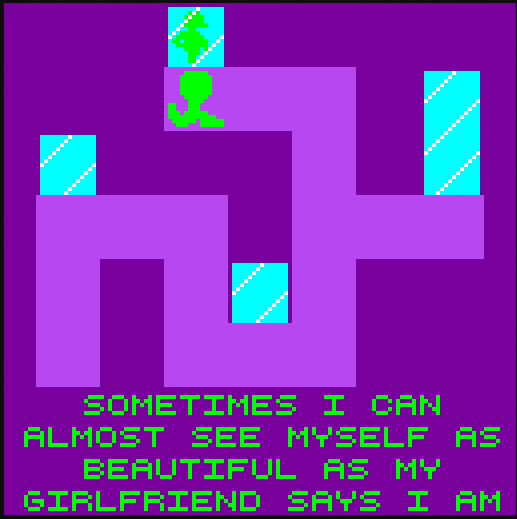 If you ask most trans people around my age about pieces of media that they remember from early on in their transition as being influential, most of us would probably point to Dys4ia.

Originally released back in 2012 on the Flash game and cartoon forum Newgrounds, Dys4ia is an autobiographical game about a six-month period during the creator's life and transition. Released as independent game development was really hitting mainstream awareness, Dys4ia is undoubtedly one of the earliest attempts at telling a trans narrative through games, and played a huge role in me feeling less alone when I encountered those struggles for myself in my own transition. 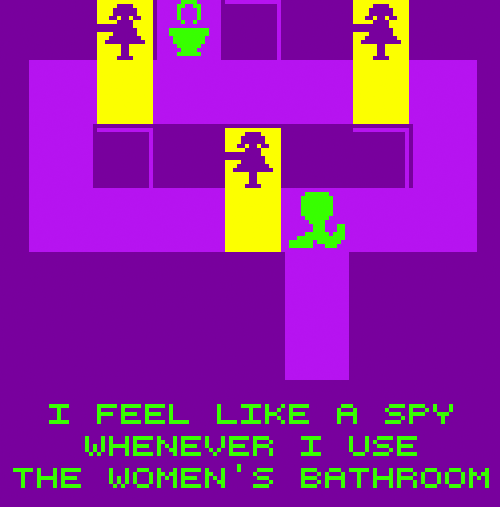 At its core, Dys4ia is a game split into four sections, each featuring basic interactivity. The opening features the player trying to defend themselves with a shield from insults hurled by anti-trans individuals, trying to fit their body into shapes that don’t fit right, fitting into clothes that are not built for their shape, sneaking through a bathroom as if they were a criminal, and having to shave all over their body.

The opening section serves as a good analog for where I was when I first found the game. I was beginning to transition socially, but I had not yet had any medical support for my trans status, and I constantly felt like I didn’t fit. I felt like a criminal for existing. I felt uncomfortable all the time, and it felt like there was little light at the end of the tunnel for me.

From here, Dys4ia moves into using gameplay mechanics to emphasize some of the frustrations experienced when first trying to get medical help, specifically hormone replacement therapy, from medical professionals who put up constant roadblocks.

From struggling to find a good doctor who will take you seriously to countless amounts of red tape and waiting lists, trying to get doctors to actually help you with transition can be a monumental task. It took nearly two years to get prescribed my first round of hormone replacement therapy, during which time my body had undergone an additional two years of unwanted testosterone-based puberty. It was hugely frustrating, something Dys4ia really captures.

From there, Dys4ia moves onto some of the realities of what it feels like when you finally get on hormones. Sure there’s a huge amount of relief, but it’s also not exactly smooth sailing. From incredibly painful sensitive nipples to low energy, periods of crying constantly, and huge food cravings, it can be a difficult and tough time.

For most women who undergo an estrogen puberty during their teen years, it’s taken for granted that it’ll be a difficult time in many regards. However, as a trans woman, we’re expected to be so happy about the fact we’re on hormones that the rest of the things going on should be irrelevant.

It’s weird and tough going through an estrogen puberty as an adult when all your friends and colleagues got that out the way a decade ago, and it is a complicated time to manage.

And finally, Dys4ia talks about life once hormones have settled and things begin to normalize. The game presents chest hair lessening, positive family support, clothes beginning to fit better, increased confidence at standing up to misgendering, and the beginnings of body positivity.

This final section was the one that meant the most to me, offering me a glimmer of hope for my future. It didn’t shy away from the fact things would be hard for a while, but it offered a sense of confidence, happiness, and contentedness that would one day be within my grasp.

It was something I, and many other trans people at the time, needed to see.

While there are more autobiographical games out there these days about being a trans person, Dys4ia was one of the first to get decent levels of attention, and it was a helpful light in the darkness for countless young women starting out on an exciting and scary journey. It’s only about 10 minutes long, so it’s well worth checking out if you’d like a better sense of what it's like transitioning to female.

It's a fan thing
Join SYFY Insider to get access to exclusive videos and interviews, breaking news, sweepstakes, and more!
Sign Up for Free
All Posts About
Fangrrls
Games
Dys4ia
Gamegrrls
LGBTQ
Related Stories