Get ready, my fellow lovers of toys, because we are heading right back into that toy box for another week of newly announced toys and collectibles that are heading your way soon. Join me, your resident if not favorite toy journalist, while we collect all the righteously cool things we love, now in toy form. And what do we love more than the '90s? That’s right: nothing.

Super7 is crushing it again with its newest Ultimates reveal — it’s The Simpsons! And with its Wave One kickoff, a question comes to my mind: In regard to The Simpsons, where do you even start when making new action figures? With a legacy this long and broad, how did Super7 know which characters and moments to tap into? Everyone has their favorites, who they consider to be required in a Wave One unveiling. You can’t please all fans at the same time, but at least no one will look at these figures and feel like they aren’t complete works of art. Because seriously, they are — these are stunning. Are they the exact characters that I would want to see off the bat? Not exactly, but that might be the result of the copyright holder as well. Homer in Space is a great choice, but while Moe looks amazing, I’m not sure I’d put him in Wave One. I’d rather have Barney with his jetpack — IT BEGINS!!! I was the biggest Simpsons fan from Season 1 through about Season 8 or 9 — after that I felt the glamour wore off and it’s never been quite the same, save for a few "Treehouse of Horror" episodes. I would have loved to have seen a "ToH" character add some flavor in this first wave, and I’m surprised Krusty the Klown isn’t here. Maybe he and Bart will come out together. All I know is that Sideshow Bob will be my undoing. The Bart, The. You can purchase any and all of these Simpson’s Ultimates for $55 a piece directly from Super7.

The whole month of August, Hasbro has been celebrating Power Month with all-things Power Rangers through several new product releases and other brand updates. In spite of awesome announcement after awesome announcement (and the fact that I am indeed a Power Rangers toy collector, mostly in Megazord form) I have not been too compelled to allow my wallet to do its parachuting out of my purse and toddling over to the computer act. That is, until now, because this Finster action figure is glorious. I was such a huge fan of Mighty Morphin’ Power Rangers as a kid, and I loved Finster’s clay creations that he sent through the haunted EZ Bake Oven to make monsters for Rita all day. He was an instant pre-order for me, without question. He costs $26.99 and is available for pre-order today via Amazon. The second Amazon exclusive announced today was one that fans had a feeling was on the way for a while — the Space Ecliptor and Astronema two pack. It costs $52.99 and is available for pre-order today as well. Finster and the two pack are shipping April 2022. 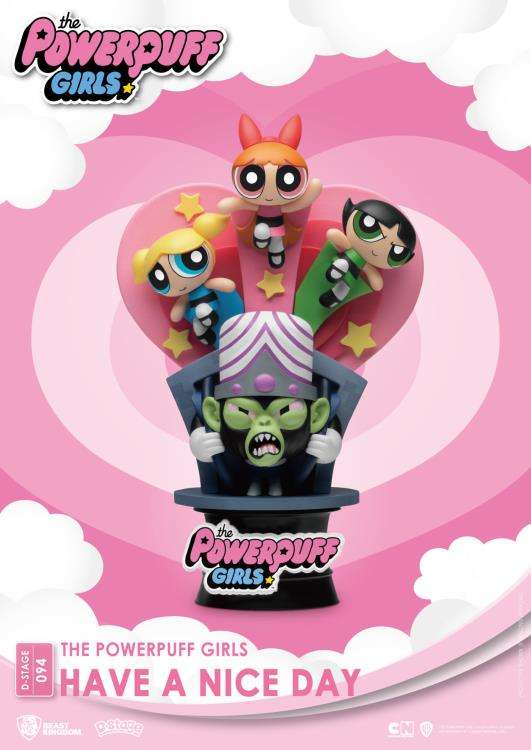 Sugar, spice, and everything nice — except that dash of Chemical X that Professor Utonium dropped into his vat, thus creating The Powerpuff Girls! And today, Beast Kingdom is showing off a Powerpuff Girls statue, and if you’re a Cartoon Network junky and grew up with these beloved characters, you’ve got to add this to your collection! The first (pictured above) is called Have a Nice Day — it stands six inches tall and this diorama spares no detail. The girls are posed in front of a pink heart with their archenemy, Mojo Jojo, locked in jail. Pre-order it today for $35.99 from BigBadToyStore — it has a ship date of March 2022.

In space, no one can hear you scream — but down here, everyone around you will hear your screams of joy when your Mezco Toyz One:12 Collective Alien figure arrives. The Xenomorph is fully loaded with film-accurate accessories including a coiled Facehugger that can fit over the heads of most other One:12 Collective figures (hint, hint, you can can stick it on your Magneto or something), an open Facehugger, a Chestburster, and an open and closed Ovomorph egg. Articulation and details are always top notch on Mezco Toyz’s One:12 Collective figures, which shows from the images fans are treated to. If you’re going to have one premium Alien figure (although I’m sure you already have a billion because army building is awesome), consider going premium with a One:12 figure. You can pre-order it today for $100 from Mezco Toyz — it will ship Q1 2022.

We’re nearing the end, my toy-loving friends, and we’re going to end with some…house rules. It’s simply really: Keep them out of sunlight, don’t get them wet, and never feed them after midnight. Hold on… those aren’t house rules, those are Gremlin rules! And today, NECA is showing off some new figures from Gremlins 2: The New Batch. You can snag a six-inch, fully articulated Brain Gremlin ($34.99) or a two pack of Demolition Gremlins ($74.99)! I can’t deal with the hard hat, it’s too cute. All of these little creatures come with tailored fabric suits and many character appropriate accessories. And if you’re a ‘leave it in the box’ kind of collector, there is a window flap, perfect for peeking through. Order yours today, because the spooky season will be here before you know it!

And as always — have fun with your toy collecting hobby. Do it for the fun and do it to stay happy.