Welcome back to Important Toy News, the SYFY WIRE column that gives you weekly reasons why turning your cash into toys is a great idea, and gives you links to said shelf candy before you have the chance to say no.

Join me, your resident toy journalist since March 2019 (woo-hoo!), and help me recap a year in toy news! And seriously, what a tasty year it’s been. So dive head first right back into that toy bin, adorn your shelf with candy, and hang out with me as we count down the top 10 most important toys (and toy news) of 2019.

Disclaimer: We're not responsible if you see all these toys and then get bummed about what you got for the holidays. But we do encourage you to splurge on yourself, and won't say anything if you return gifts you don't like so that you can buy some of these sweet toys!

Sweet mother of goodness, were fans excited for these toys. It took months after the first wave of Power Rangers Lightning Collection figures was announced for them to finally come out (the original street date was April 21st, then it just kept getting pushed back).

09. He-Man and the Masters of the Universe

2019 was a year of amazing announcements for the He-Man and the Masters of the Universe franchise. Over at Super7, they successfully crowdfunded a 4 foot tall, three-foot wide Snake Mountain playset. We also got a few new waves of MOTU figures from the Super7 warehouses, including my beloved Evil-Lyn, Shadow Weaver, and the Japanese box figures of He-Man and Skeletor.

But the biggest MOTU related surprises actually came from Mattel themselves. In 2019, they first announced that Masters of the Universe was coming (back) to the big screen. Then, we saw three new toy announcements from Mega Construx, Mattel’s answer to LEGO. Mega Construx created a Wind Raider Attack plane, a Battle Bones set, Castle Grayskull, and about six “totally not Minifigures."

Shortly after, an homage to MOTU was released by Mattel with some new MOTU x WWE crossover figures. But the best of the best would come when Mattel announced its He-Man Origins toy line complete with new cartoon. Tons of characters were announced in the first wave, including He-Man, Teela, Man at Arms, Skeletor, Evil-Lyn, Best Man, and Battle Cat! 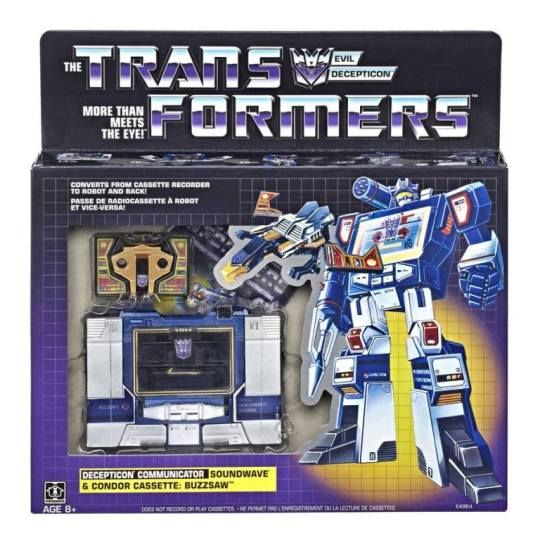 In 2019, Transformers celebrated its 35th anniversary. Naturally, there were some fun reveals, such as the Transformers: A Visual History book by Viz Media, and reissues of some of the Masterpiece figures from Takara Tomy. Flame Toys released its first Transformers model kits, including Optimus Prime, Bumble Bee, Nemesis Prime, and Megatron.

The most anticipated and sought after pieces this year were the two newest G1 Reissues, both Walmart exclusives. In January, we had Optimus Prime and in August, we had Soundwave and a bunch of cassettes. Both had an MSRP of $49.99, but the biggest distinction was that the Optimus Prime sat on the shelves forever, while the G1 Soundwave reissue flew off the shelves in record time. I should know — I bought two. And for the record, say it with me — Unicron.

07. Pennywise the Clown is the Horror Toy of the Year

Yes, IT: Chapter Two hit theaters in September, but 2019 was just filled from start to finish with Pennywise the Clown toys. And hey, there are no complaints from me!

Kicking off the year strong, we had Mezco Toyz announcing its One:12 Collective Pennywise the Clown, and from there, it managed to get cooler. Hot Toys revealed a premium Pennywise figure for $250 that sold out in minutes. NECA dropped not only its Toony Terrors Pennywise (1990 and 2017 versions), but released an SDCC black and white etched Pennywise and opened preorders on a new It: Chapter Two Ultimate Pennywise.

Then of course, the torrent of Funko Pops flooded into the ether and long-tongue Pennywise in every form just continued to steal our hearts. And if you didn’t read our Black Friday Horror piece this November, you can still go back and see how many times Pennywise made an appearance in it!

While Gundam and other giant robots are discussed sparingly here on Important Toy News, we still have to give some love to what’s probably the most important giant robot franchise in Japan. I mean, after all, there is a life-sized one standing smack in the middle of Diver City in Odaiba, Tokyo. And hey, remember that announcement about the live-action Gundam movie that was announced in 2018 that we’ve heard nothing about since? That was tight!

All jokes aside, it was really a hell of a year for Gundam toys. My favorite was definitely the announcement and release of the Gundam Universe figures. These are pre-assembled, cost $24.99, and so far, two waves have been announced. The best part? You can find them at Walgreens! Anime robots at Walgreens! My 14-year-old self’s mind is exploding because you just couldn’t do that back then!

Another classic franchise to make its return in 2019 is ThunderCats! Sure, in 2018 we were told about the cartoon ThunderCats Roar and… haven’t heard a peep since. But on the toy side? HEYOOOOOO!

Super7 showed off an amazing wave of Ultimate ThunderCats figures. The flagship wave includes Lion-O, Panthro, Jackalman, and Mumm-Ra. They cost $45, will ship April 2020, and are available for preorder now. Meanwhile, our friends over at Funko announced their second wave of ThunderCats Savage World figures, and they are great. Seriously, they’re chunky and bulky like Masters of the Universe figures, but they have this great $11 price tag. And last but not least, just today Iron Studios, makers of premium statues and figures, are releasing some stylized Chibi style ThunderCats toys for $30 apiece. While it’s not an aesthetic that appeals to me, I welcome ThunderCats fans to live their best collecting life. They will ship first quarter 2020.

2019 might as well have been the Year of the Turtle, as many toy manufacturers got their hands on the Teenage Mutant Ninja Turtles license. Or if they already had it, they did new and amazing things with it.

Mondo showed its Turtle Chops with its reveal of the amazing comic book style Michelangelo, which is available for purchase right now for $85. You can also take NECA for example — just this year they sold their 7-inch Movie Turtles as GameStop exclusives, made the Capture of Splinter as their SDCC exclusive, released some cartoony '80s Turtles two packs, and did it again with some amazing cartoon accurate Bebop and Rocksteady figures.

After that, Super7 stuck some Turtle Boys ReAction figures in a pizza and sold it for $70 at SDCC, which I bought, thank you very much. But much like the ThunderCats figures we discussed previously, Super7 has an awesome line of Ultimate Turtles on the way, costing $45 each and shipping 2nd quarter 2020. And of course, the OG Turtle Daddies themselves Playmates still holds the TMNT license and just released the 35th Anniversary Walmart Exclusive black and white comic book turtles four-pack, and a GameStop exclusive original turtle toy reissue four-pack that cost $30 and are just awesome.

03. The Resurgence of Star Wars Toys

One of the more amusing things that happened this year with Star Wars toys was when Entertainment Earth sold one dozen “Roses” (Rose Tico) Black Series figures for $20. It's too bad she was barely in The Rise of Skywalker!

Then, in the summer, Hasbro began to release the Black Series Archive figures. Then, the Vintage Collection made its debut. We even wrote an entire Black Friday guide dedicated to Star Wars! And then, The Mandalorian showed up, exploded in popularity, and helped make Star Wars toys exciting again. Although according to the internet and its hoards of spoilers, I think a new movie just landed in theaters or something, right?

It was a kaiju-sized year for Godzilla, and oh man — did the cuteness never end. In this corner, we had some painfully precious chubbsy wubsy Godzilla figures from Taiwain. We couldn't verify if it was licensed, but it was indeed adorable.

However, Kidrobot came to the rescue and showed off its vinyl mini blind box assortment of awesome Kaiju Creatures! There were even more cute Godzillas this year when new toys from the popular Japanese kid's book Chibi Godzilla and Friends became cutesie bootsie vinyl toys and heck yes, I have a set.

And that ramen eating Godzilla statue from Mighty Jaxx and Sideshow? Done — I’m slain by cuteness and I can’t take anymore. But if I can’t handle the adorable cuteness then I’d better stay away from our number one, who you know can’t be anyone other than…

01. The Child aka Baby Yoda

Baby. Freakin’. Yoda. There is no WAY we’re doing a 2019 toy wrap up without discussing him — and he hasn’t even been released in toy form yet! It’s just the anticipation that’s killing us all. And oh my goodness gracious, when that toy news hit, it was incredible.

That little stinker touched our hearts from the second his little floating pod opened up in The Mandalorian. And we knew we wanted to just cuddle him all up. First, Mattel and Funko came to the rescue with a vinyl head 11-inch figure and two Pop! figures of The Child. Those are due in Spring 2020, around May. Shortly after, Hasbro showed everyone how Big Daddy makes toys and blasted our senses with six new Baby Yoda toys. Those are also due around May-June.

But then, just this month, Disney themselves made an announcement that they opened preorders on their own Baby Yoda plush — it’s 11 inches tall and costs $24.99. The best news? It is coming out in February 2020 — all right, Disney beating everyone to the punch! BABY PUNCH! Make sure you stick with Important Toy News in 2020 and see what awesome new delights show up every week!

It's a fan thing
Join SYFY Insider to get access to exclusive videos and interviews, breaking news, sweepstakes, and more!
Sign Up for Free
All Posts About
Features
Games
Movies
TV
Action Figures
Best of 2019
Collectibles
Important Toy News
Who Won The Year (and Decade)?
lists
rankings
toys
Related Stories