Welcome back to Important Toy News, the SYFY WIRE column that shows you a week's worth of amazing new playthings, collectibles, shelf candy, and reaffirms your suspicions that toy life is best life, and those who object are insane and a waste of space. Join me, your resident toy journalist, as we start our geeky toy-hunting journey by showing everyone this week's hotness is toy collecting.

And you know what? This week, completely by chance, we sure have a lot of movie toys going on. So pull out the popcorn and let's project some film... or... something.

Let's kick it off '80s style with one of the strongest mullets you'll ever see on a toy. Presenting Threezero's John Rambo figure, based on Stallone's appearance in Rambo III. Standing 12 inches tall, Rambo has been given a custom-designed figure and every accessory in the flippin' room.

Can you believe this list? I'm no military expert, but I'm sure there have been people in the actual Army who were shipped off with fewer items on their persons. This figure will ship Q2 2020, has an MSRP of $189.99 and can be preordered today.

We over here at SYFY WIRE are Kaiju Crazy, and there's no better lumbering suit Tokusatsu creature who represents better than Godzilla! And now, Kidrobot is celebrating Godzilla's 65th anniversary with three new toys.

You can get the plush Godzilla 8-inch Phunny or one of two 8-inch vinyl figures. Fans can choose from Mecha Godzilla or the new MechaGOLDZilla! Either can be ordered today from Kidrobot's Godzilla Collection. And if you're looking for more Godzilla gear for the holidays, check out our monster gift guide!

Now, here are three new pieces from Hiya Toys that I am so incredibly jazzed about.

I think my favorite is definitely the RoboCop 2 figure, which is funny because probably no one has ever called anything about that movie their favorite anything. But it features a unique paint job that mimics the look of his armor in the film (i.e., it's all sparkly metallic rainbow unicorn nail polish color). Each of these figures comes with a pistol and data probe.

We haven't gotten much in the way of Star Wars: The Rise of Skywalker merchandise yet (which is weird, because it's hard to imagine that every toy is a spoiler), but at least our buddies over at Hot Toys are showing off some newness by introducing the new 1/6th scale Rey and D-O collectible set from the final chapter of the Skywalker saga. It costs $242, will ship Q2 2021, and can be preordered today.

According to Hot Toys' official description, the "highly-accurate Rey collectible figure is expertly crafted based on her appearance in Star Wars: The Rise of Skywalker. It features a newly developed head and hair sculpture, meticulously tailored outfit, a lightsaber, an interchangeable lightsaber blade emulating the weapon in motion, Rey's signature quarterstaff, a blaster, a training helmet and remote, and a desert theme figure stand! The new droid D-O features detailed mechanical designs, articulations, and finely applied weathering effects!"

Personally, I think this Rey figure looks great. I love the stern expression on her face and everything is beautiful. But I've got to say, in certain angles, Rey is looking a little Natalie Portman/Padme in the face. Is that our instant fan theory? Rey is a clone of Padme, brought to life to seek revenge on the Emperor for turning her husband to the Dark side and taking her away from her children? Women and broken hearts, am I right?

And last on our list of movie toys (comic book, movie, who is counting anymore, yeah?): We have the final reveal of the "Who is that sexy couple?"

Spider-Man's Peter Parker and Mary Jane statue from Sideshow Collectibles. We saw a sneak peek of the prototype piece in our San Diego Comic Con countdown of Top 10 booths, and you can see the final product has a retooled face. However, the paint and sculpt of this piece is still great, and the polyresin Spider-Man and Mary Jane Maquette is fully sculpted in J. Scott Campbell's signature art style. 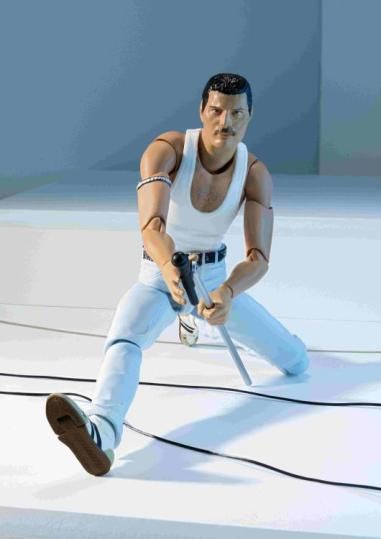 From the splendor of movies to the grandiose sounds of music, Bandai is adding a gorgeous Freddie Mercury from Queen to its S.H. Figurarts action figure line. Freddie, the legendary lead singer of Queen (who passed away far, far too soon), is memorialized in a new S.H. Figuarts action figure made by Bandai. He has an MSRP of $59.99 and can be preordered today. He will ship in April 2020. No one else sounded like Freddie Mercury, and really, no one else looked like him. This particular figure represents Freddie in his famous 1985 Live Aid concert costume.

For me as a kid, I was hooked by "Bohemian Rhapsody" (I listened to that record endlessly with my dad), and knew the music video of Freddie all clean-shaven with long hair and that Discoesque jumpsuit. It was such a surprise to see that this Freddie Mercury, with his short hair, mustache, and tight jeans became the more iconic look of the irreplaceable Queen lead singer. This is actually Bandai's second Freddie Mercury figure; the first one had him in his trademark yellow jacket.

We've reached the end, my toy-loving friends, and I think I may have saved the best for last.

NECA Toys, makers of most things that are incredible and mind-blowing, are gearing up to release its second wave of '80s cartoon-style Teenage Mutant Ninja Turtles action figures. Word around the playground is that some of these sets have started showing up at select Target stores. And can we just take a minute to specifically admire the Bebop and Rocksteady in this set? Holy mother of 7-inch monsters these creatures are phenomenal! NECA was so careful to design these toys with thick, black lines that give them that cartoonish embellishment.

Heroes in a half-shell — are you kidding me? My shell is at least three-quarters hard after being exposed to these toys. At least.