Behind an extremely incompetent cyborg cop is a grade school-age child doing all the work. Of all the sidechicks SYFY FANGRRLS is celebrating this month, Inspector Gadget's niece Penny should be the most obvious.

Many like to attribute Gadget's success when it comes to successfully defeating M.A.D. agents to his good luck, but that's just a really weird way to spell Penny. His niece would and should be the first one inducted in the Not Your Sidechick Hall of Fame. If there was no Penny, there would be no Inspector Gadget. No, seriously. Dr. Claw would have made him into his Go-Go Gadget reclining chair within 48 hours. Penny is the true nemesis to the entire M.A.D. organization which makes her without question no one's sidekick.

A lot of people in the Inspector Gadget universe owe their lives to this child. Inspector Gadget's boss, Chief Quimby, doesn't just owe Penny his existence but his entire pension. She's the only reason he has a job and hasn't been fired for having such an inept part-man-part-gadget on his team. Penny does her Googles before and during each investigative assignment her uncle receives from Chief Quimby.

Her research is usually what ends up not only saving her uncle but also the citizens of Metro City and sometimes the entire world. There have been several occasions in which Penny is the one to figure out a villain switcheroo has occurred — while her uncle, as usual, follows the wrong lead. The amount of pressure on this kid — who isn't even old enough to get her learner's permit — is more outrageous than the idea of the government spending billions of dollars to turn a man into a sentient Swiss army butter knife.

Penny working behind the scenes to save the day for her uncle is the only reason child protective services hasn't tried to beat down the Gadget household to come and collect her. It's laughable that anyone with an iota of sense could look at him and think, “Yeah, he knows what he's doing,” but here we are.

If Penny were truly a sidekick, she would be under the direction of her uncle. Thankfully Penny never listens to that goofy man. He doesn't know what the hell he's doing most of the time. Instead, she listens to her intuition and doesn't just rely solely on hunches. Those gut feelings, paired with her research abilities, are what make Penny the real detective in the family. Inspector Gadget couldn't find his way out of a ripped paper bag even if they programmed him with the state of the art detective software. Her detective skills are what keep her a step or two ahead of M.A.D. and a thorn in Dr. Claw's side. How competent could a criminal organization be if they are constantly being foiled by a wee babe, anyway? Maybe M.A.D. should use their own kid to run their operation behind the scenes.

In addition to those amazing detective skills, Penny is a taskmaster. It's a lot of work to not only keep a grown-ass cyborg alive, but to consistently ruin the plans of M.A.D.? That takes the responsibility cake. So, Penny, like anyone who understands their bandwidth, enlists help when she needs it. She utilizes her dog Brain to help look after her uncle and keep him out of harm's way. This allows Penny to effectively multitask and thus keep Inspector Gadget alive and the world safe. If anyone is a sidekick in this entire situation, it's the dog. 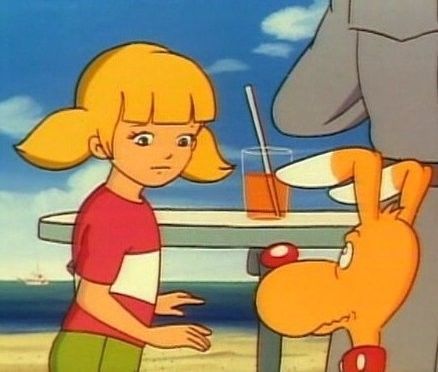 Never has considering a character a sidekick been so disrespectful. Penny deserves much more than flowers. The girl deserves competent caretakers for one, not to mention a vacation, and no less than 80% of Chief Quimby and her uncle's pensions. If there were a Kidz Bop version of Maxwell's "This Woman's Work," Penny would be who they were singing about. It's truly a wonder there was never a spin-off show only starring Penny and Brain, the true heroes in the Inspector Gadget universe.

It's a fan thing
Join SYFY Insider to get access to exclusive videos and interviews, breaking news, sweepstakes, and more!
Sign Up for Free
All Posts About
Fangrrls
TV
Inspector Gadget
Not Your Sidechick
Related Stories

Why Batgirl of Burnside brought out the best in Barbara Gordon

Aliens' Newt is more than someone to be saved