You won’t see him coming — and that’s not just because his character plays a stealthy hero. Star Wars good guy John Boyega is reportedly one of the stars of an upcoming sci-fi thriller podcast that's heading straight to your ears on the iHeartPodcast Network later this year.

Deadline reports Boyega will give voice to a “mysterious hero” who penetrates the defenses of a Silicon Valley outfit in the upcoming There Be Monsters, a 10-episode sci-fi narrative story that also stars Darren Criss (American Crime Story: The Assassination of Gianni Versace). Criss also is lending his vocal talents to Superman: Man of Tomorrow later this summer as the voice of young Clark Kent.

A production of iHeartRadio, FlynnPictureCo., Psychopia Pictures, and UpperRoom Productions, There Be Monsters reportedly will feature Boyega (who’s also a co-producer and, of course, plays "Rebel scum" Finn in the Skywalker saga's final movie trilogy) as a character named Jack Locke. Locke’s harboring a vendetta against a tech startup headed by CEO Max Fuller (voiced by Criss), a company on a mission to bio-hack human beings via “highly secretive creations” with the potential to “enhance human biology in incredible ways” — even though that comes with a dark tradeoff.

Watch — or, rather, listen — for Boyega to come calling in There Be Monsters sometime before the end of this year.

He’s already spun Sony a huge hit with his own PS4-exclusive Spider-Man game, and now your favorite Marvel wall crawler is heading back to PlayStation as a playable character in the upcoming Marvel’s Avengers from publisher Square Enix and developer Crystal Dynamics.

Sony revealed today that Spidey will be among the expanded lineup of characters players can control in future downloadable content, once Marvel’s Avengers is out in the wild on consoles later this summer. But, in keeping with Sony’s longstanding claim on Spider-Man's corner of the Marvel neighborhood in both movies and video games, he’ll only be coming to the PS4 and PS5 versions — meaning Xbox One and Stadia players with a copy of the game will have to be content with watching from the sidelines. 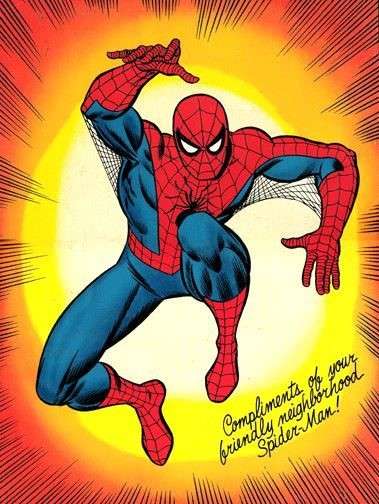 Sony didn’t reveal when Spidey will show up as DLC, but the version we’ll be getting in Marvel’s Avengers apparently will stand apart from his PS4 solo predecessor. Sharing tons of old-school Marvel comics panels as sources for the team’s design inspiration, Crystal Dynamics’ Jeff Adams said via the PlayStation Blog that the game’s artists are taking Spider-Man's design cues from the deep roots of the web-slinger’s Steve Ditko-era glory days.

“Steve Ditko set the standard with his Spider-Man design, and John Romita Sr. evolved it into an icon recognized the world over,” wrote Adams. “Fans can expect to see Ditko and Romita’s influence in our take on the hero, with nods to other talented artists that have defined the character’s look over his long history.”

The team behind Marvel's Avengers is already on record as being big fans of Marvel's classic comics (they even met with the late, great Stan Lee in the early days of the game's development), so Spidey's new old-school look definitely sounds like it'll be much more than an added-on afterthought. Watch for Marvel’s Avengers to assemble for PS4, Xbox One, Google Stadia, and PC on Sept. 4.

The movie box office is still far from posting the kind of numbers typical for the middle of summer, but like everything else in 2020, new movies — and theatergoers — are mostly still staying home until the coronavirus pandemic clears. At least there’s a genre movie with a little staying power atop the past weekend’s meager numbers, though: For the second week, Dave Franco’s voyeuristic IFC horror indie film The Rental outpaced old-school blockbuster repeats to scavenge a six-figure haul.

Thanks in part to drive-in theaters, which have enjoyed a small resurgence as traditional cineplexes murmur cautiously back to life, Franco’s horror flick about placing too much trust in a malevolent landlord needed a mere $290,300 weekend haul (and a total two-week gross of $890,400) to finish at the top of the charts, according to Deadline. It’s the only new-release movie in the top 10 list, with classics like The Goonies, Jurassic Park, and Jaws finishing 2,3, and 4, respectively, in the genre-heavy lineup.

Far from studios’ original plans for this week, The Rental essentially has the new-movie spotlight all to itself at the reported 242 locations where it’s showing. In an alternate, pandemic-free universe, fans would currently be buzzing over Sony’s Spider-Man spinoff Morbius this week — or, had theaters begun reopening sooner, Christopher Nolan’s Tenet. Both movies were at one time set to open this past weekend, but both are now arriving farther down the calendar. Tenet is slated to open in the U.S. on Sept. 3 following an Aug. 26 global premiere, while Morbius has been delayed until March 19 of 2021.

It's a fan thing
Join SYFY Insider to get access to exclusive videos and interviews, breaking news, sweepstakes, and more!
Sign Up for Free
All Posts About
Games
Movies
News
Darren Criss
John Boyega
Spider-Man
The Rental
There Be Monsters
the Avengers
Related Stories

Star Wars: A budding romance between Finn and Rey had to be removed from 'The Force Awakens' novelization