The 1960s were undoubtedly a BIG time for Marvel Comics. Spider-Man, The Incredible Hulk, Ant-Man, Doctor Strange, Thor, Iron Man, and the X-Men (among many others) were all born during the psychedelic decade. That said, the '60s were also an incredibly small time for the company. In 1966, Marvel set a certified world record with the publication of the planet's tiniest comic books. Sold in gum-ball machines, these six "Mini-Books" told bite-sized stories about Captain America, Hulk, Nick Fury, Spider-Man, Thor, and Millie the Model. Now, more than 50 years later, Abrams has blown them up into a collectible box set, which SYFY WIRE is proud to exclusively preview to the public.

In addition to the original six Mini-Books reproduced in a larger format, the set includes an additional seventh book (written by Jack Kirby biographer Mark Evanier) that explores the history of the teeny-tiny superhero adventures that may very well have been shrunken down with Pym Particles. Evanier's words are accompanied by the eye-popping and Andy Warhol-esque photography of Geoff Spear.

"It was kind of fun because it justified all those hours I spent trying to collect them in the first place," Evanier tells SYFY WIRE. "You got hooked on trying to collect a set of six. These were things that came out of vending machines, so trying to find them all was like trying to win a slot machine in Las Vegas ... Then, I'm suddenly being paid to write a book about them. It justifies it and it feels good. [This job] reminded me of a time when I was more enthusiastic about comics than maybe I’m capable of being these days. It took me back to that wide-eyed wonder about, ‘Ooo, Marvel Comics! The magic! I must have all of them!’ It’s a been a long time since I felt that way about anything in a comic book format."

Move over, Campbell's Soup cans! Check out some of Spear's images below:

To piece together the tiny timeline, Evanier spoke with comic book legends like Larry Lieber (co-creator of Iron Man and Thor) and the late Dennis O'Neil (co-creator of Ra's and Talia al Ghul). Interestingly, O'Neil, who had been doing general model and Western work for Marvel in the 1960s, got his first big superhero break on the Captain America Mini-Book.

"He was delighted to confess to that because he’d never told anyone," Evanier says. "It was the first time he got to write a name superhero, even [if it was] for a Mini-Book. He was very proud of it and very pleased that someone now would know about it."

While everyone is sure to have their own favorite among the six Mini-Books, Evanier is partial to the Spider-Man comic, which he lovingly describes as "so sappy and silly." He also likes it for another reason that will (believe it or not) please fans of Krypton's last-living son.

"It has a cameo in it that’s almost Superman," he explains. "People [were excited] when DC and Marvel did that Superman meets Spider-Man crossover book in the ‘80s, but that was not their first time meeting. They kind of met in that little Spider-Man Mini-Book, or at least you could claim they did. It’s not quite the same thing [but] that’s how that thing was more interesting back then because it seemed so forbidden." 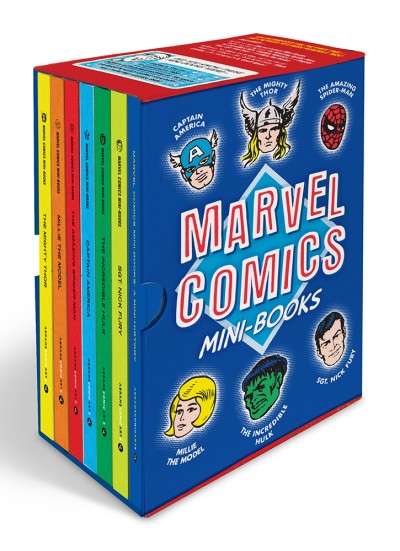 Evanier, who remembers keeping his own Mini-Book collection in a plastic pill box, is overjoyed that the puny comics are now: A) easily find-able and B) capable of being displayed on his mantle.

"I assume there are people who will buy this set because they remember the joy that they had when they bought the Marvel Mini-Books back in the ‘60s and they want to get a little bit of that tingle back and find out more about them," the writer concludes. "This box set can be displayed on your shelf; there was no way to display the original Marvel Mini-Books on your shelf ... Now I will have this little box set on my shelf with all the other stuff that I’ve done. Like a little trophy; like a little remembrance; like a little decoration in your house that reminds you of something you care about."

The boxed set goes on sale this coming Tuesday, Aug. 18. You can pre-order it for $29.99 right here. As you eagerly wait for Amazon to deliver your package, check out some exclusive interiors from the Captain America and Nick Fury books in the media gallery below...

10 hours ago
See All Posts
Editor's Picks
Get Tickets