As someone living on the autism spectrum, I have always had a slightly obsessive love of Pokémon. Be it the games, TV show, or other assorted media, the series' focus on collecting full sets of creatures has always scratched a very specific itch for me. I like organizing things, having every possible piece of a puzzle, neatly lining things up, and learning facts and figures. Pokémon has always been perfect for that, with its ever-growing roster every few years giving me a reason to come back, learn what changes were made to the creatures I love and find a whole bunch of new ones to add to my collection.

Over the years, I've gone through the "Gotta Catch 'em All" process a couple of times, at different points in my life, in different ways. When I was younger, I used to complete my Pokédex by owning every Pokémon at one time or another, not all at once. If I caught a Charmander, evolved it to a Charmeleon and then a Charizard, my Pokédex said I had caught all three of them, even though I only had Charizard left. Later, I started trying to maintain a "living dex," having every evolutionary stage of every Pokémon in my collection at once. In the above example, a living dex would mean I would have had a Charmander and a Charmeleon and a Charizard all in my collection at the same time.

At this point in time, I have a full living dex of every Pokémon available (over 800 total), I have played through every main series Pokémon game more than once, and I recently spent over 600 hours playing Let's Go Pikachu, hunting for rare (1/4000 approx spawn odds) shiny forms of the original 150 Pokémon. However, there are Pokémon players out there who tell me I am not playing the games correctly. Some tell me I'm not a "real" Pokémon player because of some in-game mechanics I make use of when going on my adventures. Some elitists say my quest to catch 'em all doesn't count.

Right now, I'm aiming for something in Pokémon called a living shiny dex. What this means is that I not only want to own a copy of every single one of the more than 800 Pokémon currently in existence, but wherever possible I want that Pokémon to be its far rarer alternate color shiny variant. Currently, in the more recent Pokémon games, these shiny Pokémon spawn roughly once every 4,000 times, which makes finding them totally at random a matter of luck and persistence. Different games in the series have different methods for hunting Shiny Pokémon that can make them easier to find — for example, catching more than 32 of the same Pokémon in a row in Let's Go Pikachu after completing your regular Pokédex and with a lure active brings your shiny odds closer to 1/300, but it will still take considerable work to find a Shiny Pokémon.

Chasing down these Shiny Pokémon is a time-consuming task. It took me 600 hours over around 10 months to complete my roughly 180-monster living Shiny dex in Let's Go Pikachu, so you can imagine collecting 800 shiny Pokémon might take considerably longer. I have cut some corners on that journey, and these are where some tell me I am not playing the games correctly.

Trading between players has been a staple part of the Pokémon series, ever since the very first games. If you only buy Pokémon Red, there are some Pokémon you can't find because they are exclusive to Blue, so players trade what they don't need for what they do. Trading has always been integral to Pokémon as a series, be that for evolving your monsters or just filling gaps in your collection, and I don't think trading for Pokémon means I didn't obtain them "properly."

I've had people trade me shiny Pokémon because they can see I'm chasing a ridiculous quest they want to be a part of, and I don't think the fact I didn't put in the hours to hunt them down myself makes me any less of a Pokémon trainer. I didn't catch some of those versions exclusive Pokémon in Pokémon Red either; that doesn't mean I was wrong to trade for them rather than play the game a second time to catch a handful of monsters. It's okay to accept other people's help when collecting them all.

A more recent addition to the Pokémon series, Wonder Trade is basically Pokémon trading turned into a lottery system. Players all around the world can pick any Pokémon from their collection, send it out into the internet, and in exchange receive a Pokémon sent by a random player somewhere else in the world. You're probably going to see a lot of throwaway terrible Pokémon on Wonder Trade, but there's also a lot of really nice Pokémon sent out into the ether. That includes sometimes rare shiny monsters. 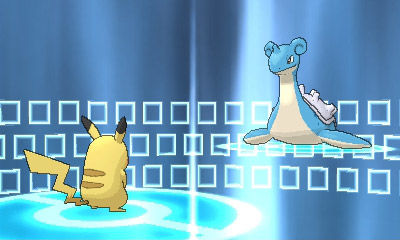 I've known players breeding for a shiny Pokémon with perfect stats, and if a Shiny that isn't quite strong enough shows up, they'll throw it out into Wonder Trade to brighten someone's day. I've sent some of my duplicate Shiny catches out into the world using Wonder Trade, and in exchange received Shiny Pokémon I didn't previously have.

Sure, I only got those Shiny Pokémon through luck, but finding any rare Pokémon is a matter of luck already. I don't know where it came from, and maybe the player who sent it out somehow hacked their game to get the Pokémon instantly, but if it works in my game and doesn't throw up any error messages, do I really care? No.

To me, Pokémon has always been about going on an adventure the way you want, to the level of dedication you want, for the reasons you want. I know people who play the story modes for each game and put them down, and I think they're just as much a Pokémon fan playing properly as a top-tier competitive player who insists on never trading for a Pokémon. I was just as real a fan when I only owned my Charizard as when I chose to own every stage of its evolution chain at once. If I want to accept traded and Wonder Trade shiny Pokémon on my quest to be the very best, it isn't hurting anyone and doesn't break the spirit of how the game is meant to be played.

Everyone can be the very best, in their own way, like no one ever was.

It's a fan thing
Join SYFY Insider to get access to exclusive videos and interviews, breaking news, sweepstakes, and more!
Sign Up for Free
All Posts About
Fangrrls
Games
Gamegrrls
Pokemon
Related Stories

The Digimon reboot is fixing one of Pokémon's biggest problems