As a companion to Marvel Comics’ ongoing cerebral Eternals title and in the wake of the latest trailer for Marvel Studios’ Eternals feature film, a new Eternals one-shot penned by Eisner Award-winning writer Kieron Gillen with interior art by Kei Zama and main cover via Esad Ribic arrives Oct. 6 — and SYFY WIRE has an exclusive preview to roll out.

Eternals: Celestia redefines the mythology of the flagship series by expanding both the past and future of Jack Kirby’s revelatory creation by focusing on the characters of Ajak and Makkari, whose thirst for answers leads them into a savage clash against a prehistoric team of Avengers. 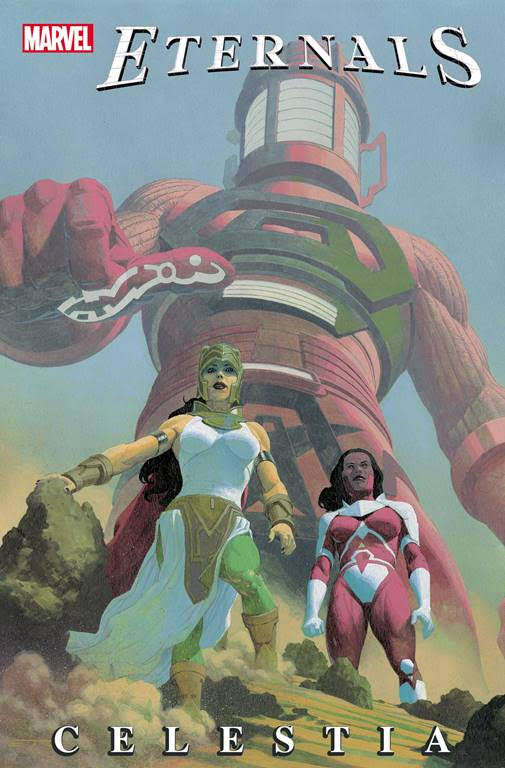 Now that the reality of their existence has been unveiled, Ajak and Makkari must realign the shattered pieces and discover a better path forward no matter how frightening it might be, or how their choices affect the rest of the Eternals after encountering the Avengers of 1,000,000 BCE.

SYFY WIRE caught up with Gillen and his fertile imagination to learn how this ambitious side project all came about.

What were your goals in creating this new Eternals story and dropping in the prehistoric Avengers team?

KIERON GILLEN: The initial goal was to introduce Makkari and Ajak properly. They're two key Eternals and they've not been on camera yet. I was saving them to have their proper Zhukov moment (which is my own term for when a character enters a plot late, but enters HARD so everyone knows what a big deal they are, named after when General Zhukov arrives in the last third of THE DEATH OF STALIN). This is that.

I had a concept for them both - odd couple priests, of completely different traditions, and trying to recover what to do in a world where their gods have betrayed them. That needed space to execute, and the plot grew from there.

I realised a pilgrimage could be interesting... and they could go to the remaining Celestial artifact on Earth. Namely, Avengers Mountain - the corpse of the Celestial who begat all that was strange in the Earth. And the second you've added the Avengers, you start thinking about the Eternals arriving just after those prehistoric avengers fought the celestials. What did they make of each other? And who would be the first person to try to speak to the Avengers?

It'd be their translator, Ajak, right? The rest came naturally.

Did you go down any interesting creative rabbit holes working on this project?

KG: I live my life down creative rabbit holes. I am like a tiny word-rabbit, hiding from the sun, running down these holes forever, joyously finding carrots and running from sinister smells and aggressive construction workers' diggers, churning up the tunnels. My main creative rabbit hole today seems to be "Overwritten metaphors."

With Celestia, it was a few things. At its core, it was thinking about how it all worked. How does Eternal religion and spirituality work? As the machine notes early on, it's a significantly more practical thing when you've actually met your maker, right? It also started making me really think about what the word "Avengers" means to the Eternals. There's been a lot about the slipperiness of language in Eternals, and I start laying groundwork for fun stuff I plan to come back to here...

How does Kei and Esad's artwork best illuminate and enhance your storyline?

KG: Esad sets the tone for our Eternals - even when he's not drawing the issue itself, he's doing the primary designs, and bringing the mood. Esad has the grandeur that the character demand.

Kei just takes it and runs. When talking before starting she was talking about her urge to go full into the Moebius and Kirby sci-fi of it, and the story really gives her showcases for this. Part of Eternals is the ultra-tech of it all, with these impossible cities hidden in shadows, behind molecules, in conceptual prisons. When we go for that, she goes for it.

The fight scenes are as psychedelic as gods fighting would be. And then there's the other flip - she was just as apt of calming down and grounding scenes. The story is a conflict between the lunacy and the life-as-lived, and she nails it. It's been a delight.

Get ready for the big MCU debut with first look at Marvel Comics' 'Eternals: Celestia'