Fans of SYFY's Resident Alien finally got to return to the wonderful world of alien Harry (Alan Tudyk) and the town of Patience, Colorado for the second half of Season 2 this week. But the recent announcement of the series renewal for a third season means creator/showrunner Chris Sheridan is already shifting focus to plan the next season of adventures.

During the Television Critics Association press day for Resident Alien, Sheridan told reporters (including SYFY WIRE) that he officially began work writing the third season a few weeks ago, and that there are 12 episodes. "It'll be more like the first season, except with two extra episodes," Sheridan explained. "I don't know how they're going to air it and I'm assuming they're gonna air continuously. But it won't be developed as a two-part season. It'll be one arc for the season."

After this week's midseason premiere, there's still seven new episodes left in Season 2 before audiences see where Sheridan leaves the characters positioned for Season 3. But he did share that many of his originally planned narratives for Resident Alien have expanded greatly. "I had a pretty clear idea of what the show was," he explained. "When we started, it was developed as a 10 episode season show and I had a sense of the first four or five seasons of that. It changed a little bit when the second season then was 16 episodes. But it changes anyway. These shows are just completely organic beasts."

Expanding on that, Sheridan continued, "You get into a show and suddenly things that you weren't sure were going to work, work really well. Things you thought were going to work, don't work well at all. And you have to change what you're doing on the fly, anyway, within the season as things are working. You lead in a certain direction with the storytelling based on what's working and what's exciting."

Furthermore, Resident Alien is a series that moves through stories and reveals briskly. Sheridan says that means he and his writers have often plucked ideas meant for future seasons and brought them forward early because it felt right. "You can make all the plans in the world about what the seasons are going to be. But until you get in with the actors on that stage, see that chemistry, how things are gelling, you don't really know what it's going to be and you work on the fly a little bit," he said of their process.

"I had some ideas about what the third season was going to be, but now that we've gotten through the second season with a lot of stuff I had not envisioned at all, I have new ideas for the third season that I didn't have before. It's a constantly evolving thing helped by the fact that these actors are so incredible, and their chemistry is so incredible. Sometimes you put a couple of these actors together that haven't been together a lot and that explodes and I want to see more of that," Sheridan continued. "There's a lot of movement as far as storytelling goes, but I can't imagine it any other way. Because if you get stuck into your preconceived notion of what it should be, you're losing out on an opportunity to take advantage of the incredible chemistry you have in front of you."

New episodes of Resident Alien drop every Wednesday on SYFY. Episodes will be available to stream on the SYFY app and Peacock the following day. The complete first season, as well as episodes 1-8 of Season 2, are now streaming on both platforms. 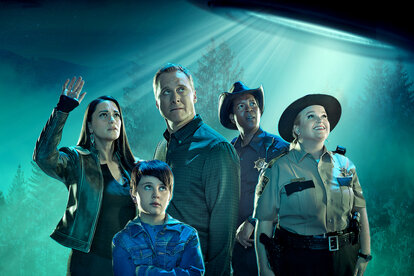