Oscar-nominated actress Salma Hayek Pinault is reportedly in talks to join the cast of Marvel's The Eternals, according to The Wrap. Not much is known about the character Hayek would play though, as it's all being kept hush-hush, per usual.

If true, however, Hayek would join fellow cast members Richard Madden (Game of Thrones) and Kumail Nanjiani (The Twilight Zone) in the film directed by Chloe Zhao (The Rider). Marvel Studios chief Kevin Feige will once again don his producer hat.

Hayek is perhaps best known for playing Frida Kahlo in Frida, the 2002 film for which she earned a Best Actress nom. She also starred alongside Will Smith in 1999's Wild Wild West, and more recently opposite Ryan Reynolds in the 2017 action flick, The Hitman's Bodyguard (seen above).

There's been a massive amount of secrecy around which role even the previously announced Eternals actors will play. When news broke in March that fellow A-list celebrity Angelina Jolie might be joining the cast, it was under similarly secretive circumstances. No matter what roles are ultimately revealed, there's no denying this film is going to be one star-studded affair.

The Eternals is poised to be one of the main pillars of the Marvel Cinematic Universe's fourth phase, which Feige recently teased. With the critically acclaimed indie director Zhao at the helm and Matthew and Ryan Firpo (Ruin) penning the script, Marvel appears ready to take audiences on a different kind of ride with The Eternals. And that's a ride into the psychedelic cosmic mind of Jack Kirby. 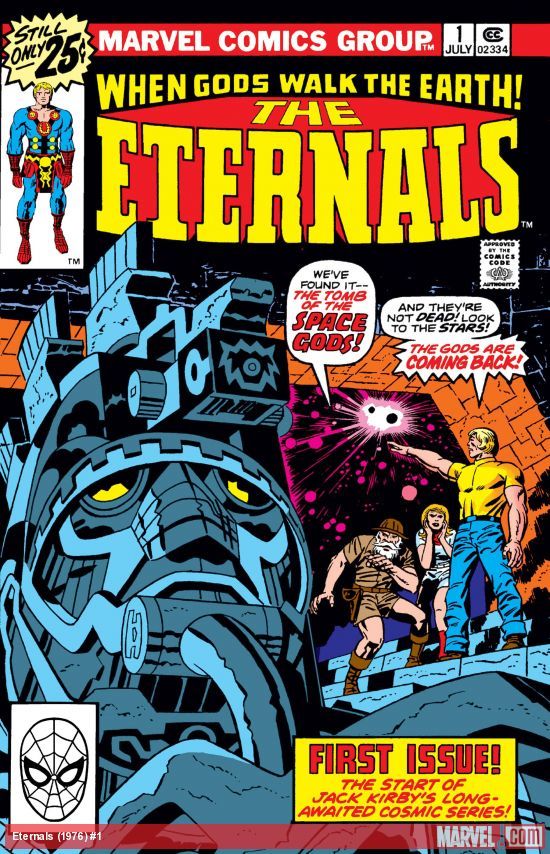 The Eternals is based on the 1976 comic by Kirby following his return to Marvel from DC. The series follows a race of incredibly powerful, nearly immortal beings called the Eternals. They were created by a group of space gods known as The Celestials. The Eternals guard against their villainous counterparts called The Deviants. Rumor has it, according to The Wrap, the story will focus on a female eternal known as Sersi, though she's expected to be played by Jolie. Any guess on who Hayek could play?

We still don't have any official release date for The Eternals, but you can bet your cosmic mind we're going to keep our eyes peeled.