Jennifer Walters is a superhero who made her first appearance in the first issue of her own title. Though that title was only to last 25 issues, She-Hulk has gone on to become one of Marvel's most ubiquitous characters. Created by Stan Lee and John Buscema in 1980, She-Hulk might not have been the most well-thought-out concept in her early days, but over the last 40 years, she's had time to become a fan fave.

Hulk was at the height of popularity after the recent debut of the TV series in 1978, and so Marvel was scrambling to find new ways to market the property to as many readers as possible. It was none other than Stan Lee who wrote the first issue of the She-Hulk, one of the last Marvel characters he would ever create. A woman known as Jennifer Walters received a blood transfusion from her cousin, Bruce Banner, who took off immediately, and the two didn't see each other for some time.

In She-Hulk's first run, Jennifer Walters spent a lot of her time confused about her transformation into the Hulk, and most of the series consisted of her dating some pretty weak romantic interests while attempting to conform to the villain-of-the-week format set by the Hulk television show.

Originally, Walters followed her cousin Bruce's template, prone to brooding and anger at her personal misfortune. In the final issues of the series, however, she did an about-face and decided that she actually far preferred her time as the She-Hulk to her life as Jennifer Walters. Though she wouldn't fully embrace this transformation until later, this gave us a glimpse of the She-Hulk to come.

She-Hulk was always more reasonable and easier to work with than her cousin, and very seldom prone to the same destructive outbursts, so she did time with various superhero teams like the Avengers. She developed a close friendship with Ben Grimm of the Fantastic Four and has joined the team since on a few occasions when a member was out of commission. She enjoyed a lengthy stint in her own title again in the late '80s and early '90s, though that series regularly went far off the rails and included enough sexist asides to make it significantly less fun to read today than one assumes it was in its time.

However, this was when readers also began to see She-Hulk as the primary fourth-wall-breaker — that is, until characters like Deadpool and Gwenpool adopted that role later on. Stylistically, this was reminiscent of the then-current show Moonlighting, which featured a similar joke structure. When the run ended, She-Hulk once again returned to a sort of guest appearance status in the Marvel Universe. She showed up occasionally in the Incredible Hulk series, but mostly disappeared from the limelight. 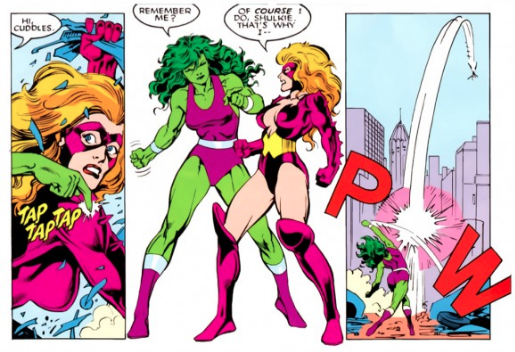 The She-Hulk We Know Today

Though much of She-Hulk's fourth wall breaking has gone by the wayside, it's been replaced with genuinely insightful character beats. All through the early 2000s, she was the star of her own series, which focused on the intersection between her work as a lawyer and her work as a superhero. She defended many of her fellow costumed crusaders in a court of law, all while trying to navigate her own tumultuous love life. She briefly joined the Future Foundation with Scott Lang, arguably one of Marvel's most genuinely fun books of the last 20 years.

Yet, Jennifer is no moral lightweight, and she proved that through the Civil War arc. During the World War Hulk storyline, Iron Man and other superheroes had banished Hulk from Earth, quite literally shooting him into space so that he might become someone else's problem. Jennifer found out about this and attacked Iron Man, who condescended to her and attempted to make light of her concerns. Jennifer's general interest in keeping the peace was put under fire during this time, and of all the heroes during World War Hulk and Civil War, her actions are reasonable and purely motivated. That aside, she and her cousin Bruce don't interact that often, so it's always heartwarming to see her continued struggles to have his back.

A 12-issue series written by Charles Soule put She-Hulk at the head of her own law firm, and this is where Jennifer Walters fully took on the persona we know her for today. She became her own boss with the explicit interest of representing superheroes and villains, which put her at odds with much of the superhero community at times. She finally went head to head with that other Marvel legal mind Matt Murdock in the courtroom, and we recommend you read that story for yourself to find out how that goes because it's a heck of a lot of fun.

After that series ended, She-Hulk returned to guest star status, but she's been increasingly prominent in the Marvel Universe through books like A-Force and appearances in Hellcat and various other comics.

Ultimately, readers love She-Hulk. Out of all of Marvel's properties, she is a character that has the ability to function well in any book. She works great on a team but has no trouble in the spotlight. Her versatility and her sense of humor keep her in a better headspace than most of Marvel's superheroes. Though she isn't always perfect, she is on top of her game as a lawyer and as a hero because she takes both jobs equally seriously. Her interest in doing the right thing doesn't always make things easy for her, but she always perseveres in the end.

The pending She-Hulk TV series recently announced by Marvel at D23 is promising, and we're hoping it will finally afford Jennifer Walters all the clout she deserves. Under no circumstances should anyone read a She-Hulk comic and dismiss her as "just a lady Hulk," and hopefully, this upcoming show will give her a chance to finally come into her own in the MCU.

The strange loves of She-Hulk