This is where the fun begins! May the 4th (aka Star Wars Day) is once again upon us, and unlike last year's more subdued celebrations, this year carries the promise of a steady return to normal. Thanks to widespread COVID-19 vaccinations within the United States, we can — at long last — cautiously gather in greater numbers, just like the majestic Sand People of Tatooine.

After more than a year of shutdowns and delays, cantinas and gangster hideouts throughout the galaxy are finally opening their doors to more and more clientele. We haven't felt this giddy and hopeful since Vader tossed Palpatine into the reactor of the Death Star. It's only fitting that Star Wars Day 2021 should ring in a new era of optimism. After all, the entire franchise is rooted in the concept of sparking hope in dark times.

So, cash in those galactic credits and clear your schedule for Tuesday, May 4, because we've got your guide on how to party like it's the days of the Old Republic. 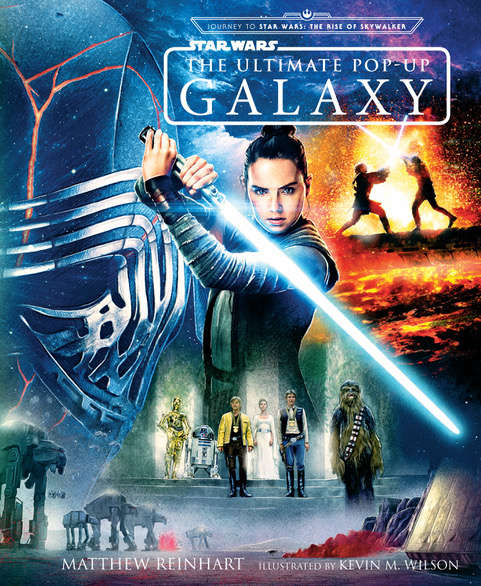 In a daycare far, far away… but still in Springfield, Maggie is on an epic quest for her stolen pacifier. Her adventure brings her face-to-face with young Padawans, Sith Lords, familiar droids, Rebel scum, and an ultimate battle against the dark side, in this original short celebrating the Star Wars galaxy.

Take a virtual vacation to some of the Star Wars films’ most iconic and beloved locations like Hoth, Tatooine, and Sorgan as this charming series whisks you off for fly-over tours of a galaxy far, far away.

Get up-close-and-personal with two of the Star Wars films’ most iconic and beloved ships as viewers explore the memorable interiors and exteriors of the Millennium Falcon and an Imperial Star Destroyer.

"I was 7 years old the year Star Wars was released [in 1977]. It was a difficult time in my childhood and my parents needed a babysitter. That summer I saw Star Wars in theaters 30 times!" Cash exclusively tells SYFY WIRE. "I have seen it many more times since then, but suffice to say I have seen it a lot. When I had my own kids, I was always making costumes for them, but had nowhere to create and showcase something for myself. I loved the shows Face-Off and Cosplay Melee and my daughter also started getting into anime and cosplay. So, I decided it was never too late to start and create costumes for myself and join her at the cons. I have done construction, worked in radio for 18 years, and owned my own business for 11 years before starting my TTFS YouTube channel. I am a father, a property owner, and a giant nerd. Like most nerds, we eventually have to grow up. My channel ... encompasses it all from doing things around the house, the property, and still never forgetting to finish projects for the nerd in me!"

Chat Theme and Reactions: Bring Star Wars to life in your own chats on Messenger and Instagram with an all-new theme that will have your messages traveling through hyperspace. Along with a new chat backdrop, you can utilize the fun reaction emojis that feature characters like R2-D2, BB-8 and C-3PO.

AR Filter: Cruise through the galaxy with the all-new Millenium Falcon AR effect. As you move your camera around, you can explore the cockpit of the legendary spacecraft and prepare to visit new planets.

Below, you can see Deezer's official ranking (highest to lowest) of all nine Skywalker Saga soundtracks based on how often they're streamed.

“Listening to Star Wars soundtracks in high fidelity with the right gear means you can hear all the rich detail that you’d likely miss through regular sound quality. The minute you close your eyes, you’ll feel like you’re in a concert hall, listening to John Williams conduct the London Symphony Orchestra live,” Antoine Jaeger, Deezer’s Soundtrack Editor, said in statement.

As an added bonus, Deezer has Music From The Star Wars Saga - The Essential Collection, a curated playlist of the most popular Williams tracks. Yes, "Duel of the Fates," "The Imperial March," and most importantly, "Leia's Theme" are on it.

The record's gatefold features the original paintings by William Stout, as well as notes from Williams, sci-fi author Ray Bradbury, and composer/critic Christopher Palmer. In addition, the track list includes a "Symphonic Suite" made up of different cues that Williams drafted for live performances.

“The Suite, which I had specially written and adapted for concert performance […] had been skillfully augmented with other music from the film to form a unified whole," Williams remarked. "A great orchestra and Gerhardt’s opulent sound and dramatic phrasing combine to make a fine addition to a rapidly growing list of great recordings of film music."

Check out the lip-smacking recipe below...

Shake with ice and strain into coupe glass

Top off with Space Dust IPA

Click here for SYFY WIRE’s full coverage of May the 4th and the latest Star Wars news.

It's a fan thing
Join SYFY Insider to get access to exclusive videos and interviews, breaking news, sweepstakes, and more!
Sign Up for Free
All Posts About
News
TV
Hasbro
LEGO
May the 4th
Star Wars
Star Wars Day
Star Wars: The Bad Batch
You May Also Like
Recommended by Zergnet
Latest on SYFY WIRE